Can Washington Still Dictate Drug Policy in the Americas?

Washington has succeeded in creating an entrenched drug-war bureaucracy across Latin America. But the momentum in favor of reform is building in unexpected places.
Tweet
Coletta A. Youngers and Adam Schaffer
February 26, 2015 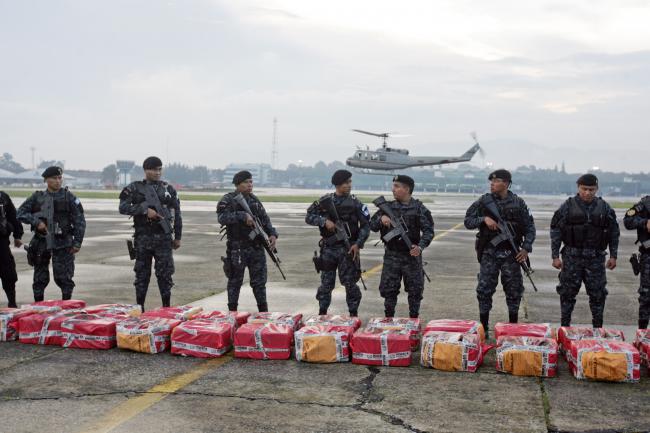 For decades, the U.S. government has imposed its repressive drug-control policies across Latin America and the Caribbean, using diplomatic, political, and economic pressure as needed. Long-simmering resentment to this approach, combined with waning U.S. political influence, has led to a dramatic turning of the tide: Latin American countries are now driving an unprecedented international drug policy debate.

A disconnect between U.S. drug policies at home and abroad has also played a role in motivating the opposition to U.S.-dictated drug policies. While this disconnect is most visible in state-led initiatives to create legal, regulated cannabis markets (now approved in four states and the District of Columbia), the Obama administration has also undertaken two significant domestic initiatives: It has placed greater priority on a public health approach, and has dramatically expanded access to drug treatment through the Affordable Care Act. Perhaps more significantly, Attorney General Eric Holder has spoken out forcefully on the need to rethink harsh sentencing policies that have filled U.S. jails with low-level, non-violent drug offenders and the enormous cost paid by those individuals, their families, and communities.

These slow shifts in domestic drug policy in favor of public health and civil and human rights, however, have yet to be fully reflected in U.S. drug policy towards Latin America. The shifts can be seen in the improved official discourse, with more attention to public health, “best practices” in drug treatment, and alternatives to incarceration. Washington has also shown flexibility with regard to Uruguay’s decision to create legal, regulated cannabis markets, and has had little choice but to extend that flexibility after Colorado and Washington moved in the same direction. Despite these nuances, the thrust of U.S. counterdrug policy continues to be on forced eradication, the targeting of transnational criminal organizations, and interdiction. In short, drugs are still seen as a scourge coming from Latin America that must be stopped before crossing the U.S. border. The drug “threat” also continues to provide a convenient means for maintaining relations and influence with military and police forces across the region.

All this is to say that the U.S.-backed drug war is far from over, and the question of drug policy will remain a key topic in regional policy debates over the coming years. While Washington no longer calls all the shots, it maintains influence over many countries that benefit from U.S. aid and trade, and drug-control efforts remain a central component of its foreign policy agenda for the region. While the U.S. military presence is smaller than it used to be, it remains wedded to the same repressive strategies. Moreover, a prohibitionist international drug-control regime largely designed by the United States has been firmly in place for a century. The first international drug-control treaty was signed in the Hague in 1912, while three subsequent conventions were signed by most UN member states in 1961, 1971, and 1988. “The prohibitionist regime put down its roots over a century,” remarked Washington Office on Latin America (WOLA) senior associate John Walsh in a recent interview, “and it is unlikely to be uprooted over a few years.”

Where U.S. armed forces are involved in Latin America, it is now with fewer boots on the ground. Instead of large-scale projects, such as military bases, the Obama administration has pursued the use of U.S. Special Forces, intelligence cooperation, and to a growing degree, drones. The former will be operating as much in a training capacity as a combat one. Following a global trend, the era of large-scale military occupations appears—for now—to be nearing its end.  Nonetheless, according to a 2013 Associated Press report, on any given day, four thousand U.S. troops are on the ground across Latin America, as many as four U.S. Navy ships are on patrol, and agents from at least ten U.S. agencies are involved in training and other drug-control activities in the region.

Colombia, long home to the most aggressive drug-control policies, has been at the forefront of the regional drug policy debate with President Juan Manuel Santos calling for a reevaluation of current drug policies. Ongoing peace negotiations with the Revolutionary Armed Forces of Colombia (FARC) has given further hope for tangible change. Yet despite a shift in rhetoric, Colombia has yet to take concrete action to reform current practices.

Despite evidence that aerial spraying of coca crops does not curb production, the Colombian government has refused to end the controversial practice. In a still-tentative agreement on drug policy with the FARC, the Colombian government reserves the right to continue spraying when needed. While alternative development programs are emphasized as a key component of future drug policy, lasting change will hinge on the Colombian government’s ability to rebuild state presence in coca growing regions, offer viable alternatives to coca cultivation, and build trust in areas where state presence has largely been exerted from behind the barrel of a gun.

The Obama administration has voiced regular support for the Colombia peace process, most recently during a December 2014 visit by Secretary of State John Kerry. If an accord is signed, the fundamental question to be put to the U.S. government is whether or not it will fund the peace, as it did the war.  International Narcotics and Law Enforcement (INL) and military aid to Colombia have decreased since their heights during Plan Colombia, and economic aid has grown to occupy a larger comparative percentage of the U.S. aid package. At the same time, Washington continues to strongly support drug interdiction and forced eradication; declining aid levels do not reflect a shift in INL or U.S. military strategies.

Like Colombia, Mexico emerged as a driving force in pushing for an open and wide-ranging debate at the 2016 UN General Assembly Special Session on “the world drug problem.” Yet despite a noted change from former president Felipe Calderón’s security-focused rhetoric to President Enrique Peña Nieto’s focus on economic reform, domestic drug-war policies remain largely intact and violence has continued unabated. Official reports put the number of Mexico’s disappeared at 22,610 since 2007, with 2014 on track to become the worst year in recent history. The horrific circumstances surrounding the disappearance and apparent killing of 43 students at a school in Ayotzinapa in southern Mexico have again brought to the fore the need for the Mexican government to seriously address deep-rooted issues of corruption and organized crime, especially as related to the drug trade.

In Central America the U.S. government also faces the conundrum of deep-rooted corruption and hence the risk of funding those its policies are designed to deter. U.S. officials emphasize that the Central American Regional Security Initiative (CARSI) prioritizes institution building and violence reduction. But questions remain: public documents on CARSI do not outline how general funding allocations are actually spent in practice, nor are details available about Department of Defense efforts throughout the region. According to the report Time to Listen: Trends in U.S. Security Assistance to Latin America and the Caribbean on the U.S. assistance allocated through CARSI between 2008 and 2014, “at least 60 percent has been destined for the region’s militaries and police forces, with the vast majority of that going to the police.”

“It’s important for [the Colombians] to go [to Central America], because I’m—at least on the military side—restricted from working with some of these countries because of limitations that are, that are really based on past sins. And I’ll let it go at that.”

Through years of counter-narcotics cooperation, Washington has succeeded in creating an entrenched drug-war bureaucracy in countries across the region; as is the case in the United States, officials whose careers have hinged on carrying out the war on drugs are not likely to change their mentalities overnight. Nonetheless, the momentum in favor of drug policy reforms cannot be denied. Colombia, Guatemala, and Mexico have ensured that opportunities for debate are included in the regional agenda. Further, there is a growing regional consensus on the need to approach drug use as a public health issue, deal with the region’s prison crisis by developing alternatives to incarceration for low-level offenders, and allow countries to experiment with policies best suited to their own realities.

Three countries have initiated bold reforms. Bolivia challenged the international drug control conventions with regard to the coca leaf and emerged victorious: while the 1961 Single Convention on Narcotic Drugs mistakenly classifies coca as a dangerous narcotic, in June 2011 Bolivia denounced the Convention. As more than one-third of UN member states did not object, Bolivia was able to re-adhere to the convention with an exception allowing for domestic coca cultivation for licit uses. In 2013, Uruguay became the first country in the world to create a legal, regulated cannabis market. And in August 2014, Ecuador implemented a sweeping penal code reform that creates better proportionality in sentencing of drug offenses and to date has allowed for over one thousand low-level offenders to be released from prison. (See the NACLA Report, Summer 2014, for background on this legislation.)

Finally, further reforms of cannabis policies are possible in the near future. Brazil, Chile, and Colombia are exploring possibilities for legal medical marijuana; the Caribbean trade bloc CARICOM has set up a commission to explore options for allowing use of medical marijuana and decriminalization of possession of small amounts of cannabis for personal use; and Jamaica appears poised for a major reform. Nevertheless, current policies have been over half a century in the making; they will not be changed overnight, nor will change be uniform, clear, or linear. Change, however, is undoubtedly on the horizon. It is a major challenge that, one way or another, U.S. policymakers will have to face.

Coletta A. Youngers is a senior fellow at the Washington Office on Latin America (WOLA), an associate with the International Drug Policy Consortium and member of the research team, the Collective for the Study of Drugs and the Law. Adam Schaffer is a program officer at WOLA.