From the defeat of the Free Trade Area of the Americas in 2005, to Washington’s sub-regional free-trade showdowns, to now, the biggest threat, the Trans-Pacific Partnership.
Tweet
R.A. Dello Buono and Ximena de la Barra
February 9, 2015 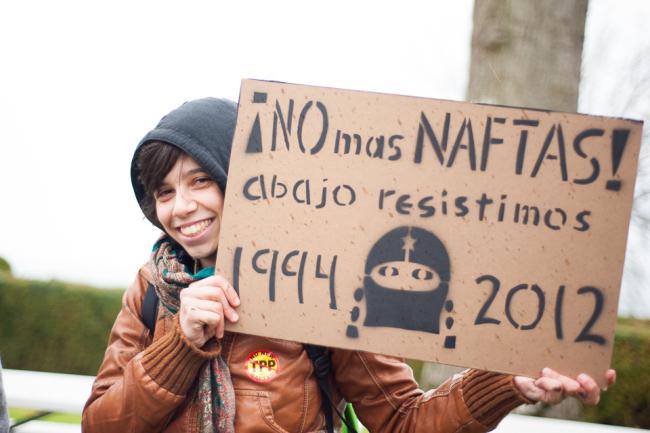 NAFTA, the North American Free Trade Agreement, celebrated its 21st birthday this past January 1. The iconic, oft-misunderstood agreement, which went into effect on New Years Day 1994 (accompanied by the Zapatista uprising in the state of Chiapas), has come to define the unequal legal and economic relationships among its member countries, the United States, Canada, and Mexico. Further, it has served as the prototype for a whole generation of hegemonic, big-business initiatives in the Americas.

It is ironic that NAFTA was first thrust into public debate as a “soft” policy to diminish the flow of illegal migration from Mexico. Since then, heavily industrialized (and subsidized) U.S. agribusiness has displaced Mexican farmers contributing to persistently low standards of living for the majority of Mexican citizens while doubling the number of Mexican-born immigrants now living in the United States—legally or otherwise. Even as NAFTA ultimately succeeded in its main mission of depressing U.S. wages in targeted industries, the rate of poverty in Mexico has stubbornly remained at around 50%.

But NAFTA has never been mainly about trade. With the emergence of Europe and China as fierce competitors in the Americas, Washington’s policies have oscillated between hard and soft tactical means of maintaining hegemony over its “backyard.” The new mechanisms of hemispheric control exhibit a full-spectrum strategy of domination that involves the interpenetration of military, diplomatic, intelligence, mass media, psychological, legal, economic, social, and cultural realms. Notwithstanding the early-twenty-first century pundits who declared that Washington had “lost interest” in Latin America, a critical analysis of U.S. policies now suggests a very different picture. Steady emphasis on securing privileged access to the region’s coveted natural resources was backed by the construction of mega infrastructure projects, pursued in the name of “security cooperation,” the war on drugs, or preventing natural disasters. Careful thought was likewise given to arming client states in the face of a potentially rebellious population.

As strategic military location gradually faded as the driving force of post-Cold War U.S. policy in the Americas, the Bush (Jr.) administration shifted the strategic emphasis toward an extractivist hold over the resource-rich south. Policy discourse meanwhile focused on job creation and the potential for businesses small and large to dip into the region’s growing consumer demand. The U.S. government touted free-trade agreements as the way forward to increased mutual prosperity through expanded commerce. Washington’s underlying bipartisan consensus now viewed free trade as the principal means to revitalize U.S. hegemony and resuscitate the super-profits of earlier eras. The ultimate goal was the creation of a Free Trade Area of the Americas (FTAA), which would unite virtually the entire continent into one big free trade zone.

When the campaign to extend NAFTA to the entire continent went into high gear, so too did the struggles of the region’s popular sectors who formed broad coalitions of opposition, building on earlier mobilizations against privatization, public sector cutbacks, and environmental degradation. The first decade of the twenty-first century witnessed countless demonstrations, popular tribunals, and symbolic plebiscites spearheaded by a new generation of transnational social movements now armed with creative applications of Internet-based organizing tactics. This chorus of opposition eventually applied a stranglehold on the FTAA, bolstered by key opposition cultivated through the governments of Brazil, Venezuela, and Argentina. Opposition to the FTAA indicated a resurgence of popular mobilization fueling a “pink tide” of electoral victories by leftist and center-left political forces. By 2005, the Summit of the Americas at Mar del Plata, Argentina, marked the failure to salvage approval of the FTAA, yielding a major victory for popular movements opposed to neoliberalism.

But even as the first signs of resistance had materialized, Washington was mounting a “divide and conquer” strategy to sign smaller-scale, bilateral, and subregional free trade agreements. This attempt to build momentum for the FTAA “from below” was likewise met with political opposition everywhere it was employed.

Colombia was proposed as the initial target country by U.S. trade negotiators but got shelved in 1996 after a quarrel with Bogotá over its refusal to unconditionally cooperate with Washington’s war on drugs. In its place, Chile was chosen to be next in line, but Washington held up final ratification of a 2002 bilateral agreement due to the Chilean government’s refusal to be coerced into joining the invading forces of Iraq known as the Coalition of the Willing. Sensing that the region’s highly negative reaction to the move was making it counterproductive, Washington later dropped this condition, and a U.S.-Chilean free-trade agreement was ratified in 2003.

The next free-trade showdown occurred in Central America, where the United States sought to create a subregional agreement—dubbed CAFTA—with Guatemala, Honduras, Nicaragua, El Salvador, and Costa Rica. With all five Central American governments anticipating popular opposition, negotiations were conducted almost entirely in secret. The Dominican Republic jumped into talks at the final stage, and when the completed document was revealed to the public in 2004, CAFTA-DR was touted as an “advanced free-trade agreement.” Its enhanced features were designed to exploit the already huge asymmetry between the United States and its trade-bloc partners, significantly reducing the latter’s ability to regulate the activities of foreign investors.

Much to the consternation of the region’s labor and environmental groups, CAFTA-DR established that the new generation of NAFTA-like agreements, like the FTAA itself, was all about compromising sovereignty in favor of the rights of capital. A new, supranational legal framework was being mandated to place the rights of investors above the constitutional reach of member countries. In short, CAFTA-DR sought to transform previously revocable privileges for foreign investors into eternal rights, establishing penalties for member countries should they later opt for alternative development strategies. As with NAFTA, the uncelebrated legacy of CAFTA-DR has been an accelerated migratory flow of Central Americans and Dominicans to the United States.

With the return of the Panama Canal Zone to full sovereignty at the turn of the century, Washington sought new means of exerting soft influence over the isthmus and pursued a bilateral free-trade agreement despite considerable local opposition. The Bush Jr. administration simultaneously sought an Andean free-trade agreement, or AFTA, to extend the subregional logic of CAFTA. Political radicalization in Bolivia and Ecuador led to a partial collapse of negotiations, eventually leaving Peru and Colombia to sign separate trade agreements with the Bush administration in 2006. While the Peruvian agreement was ratified in 2007, strong U.S. congressional opposition to the Colombian free-trade agreement persisted because of the country’s atrocious labor and human rights record. The treaty could be ratified in 2011 only after Secretary of State Hillary Clinton came to its rescue. Using fast track authority, approval was also given to free-trade agreements with Panama and South Korea. All of this was in sharp contrast to the rhetoric of the 2008 presidential campaigns of Barack Obama and Hillary Clinton when both candidates not only opposed the U.S.-Colombia free-trade agreement but also claimed they would also push to renegotiate the original NAFTA agreement.

Recently, Washington has further tried to counter China’s growing influence in the region by joining negotiations with the Trans-Pacific Partnership (TPP). By 2012, the TPP countries included Chile, Peru, and Mexico, along with Australia, Brunei, Canada, Japan, Malaysia, New Zealand, Singapore, the United States, and Vietnam. Following the anti-democratic model of CAFTA, these advanced trade, deregulation and investment agreements are being purposefully forged in secret. Given that all the current and prospective Latin American parties are already signatories to U.S.-sponsored free-trade agreements, the deeper nature of the TPP is evident. 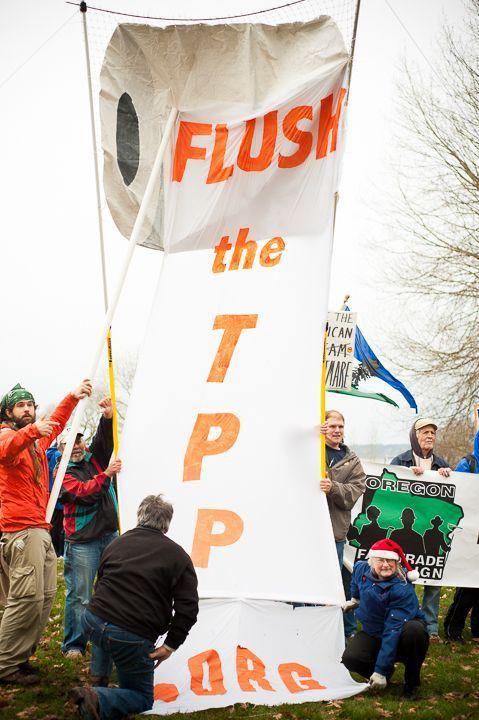 The TPP is designed to override state prerogatives and regulations in even the most sensitive areas. It seeks to further privatize remaining public services, give free reign to anti-ecological mining, and more robustly protect intellectual property rights, with a particularly negative impact on consumer access to generic medicines. Further embedded in the TPP is a scheme for arbitrating disputes via the International Centre for Settlement of Investment Disputes (ICSID) so as to uniformly ensure business-friendly resolutions.

Most of what is known about the TPP comes courtesy of WikiLeaks, which has managed to acquire various portions of the draft agreement, including the highly contested chapter on intellectual property released in October 2014. Of 29 chapters, only five actually discuss trade, while all the others emphasize the elimination of virtually all forms of government regulations in spheres frequently exempted by previous agreements, including foodstuffs and medicinal intellectual property. While substantive access to the negotiations has been blocked to the public and even to U.S. congressional representatives, access was granted to corporate advisers of major corporations including Halliburton, Monsanto, and Walmart. The draft documents reveal considerable friction as Washington is resolutely insisting on the rights of large pharmaceutical companies to prolong monopoly control over essential medicines for a full 12 years. Opponents contend that licensed permissions to generic-drug producers could, if permitted, save countless lives.

In the final analysis, U.S.-sponsored free-trade agreements have evolved to become mainly investor-rights agreements in an attempt to perpetuate and deepen neoliberal schemes for regional hegemony. Consistent with this logic, Washington’s involvement with the TPP initiative indicates a more proactive stance in countering China’s expanded influence. Just as with the FTAA, social activist groups have demonstrated their resolve to pull these “Dracula” agreements into the light of day so that public scrutiny can put them to eternal rest.

Ximena de la Barra is a writer and international consultant on development issues. She was an UNCTAD III delegate for Chile during the Popular Unity Government of Salvador Allende and later served 15 years in senior UN agency posts. R.A. Dello Buono is Chair and Professor of Sociology at Manhattan College in New York City and recent president of the Society for the Study of Social Problems (SSSP).