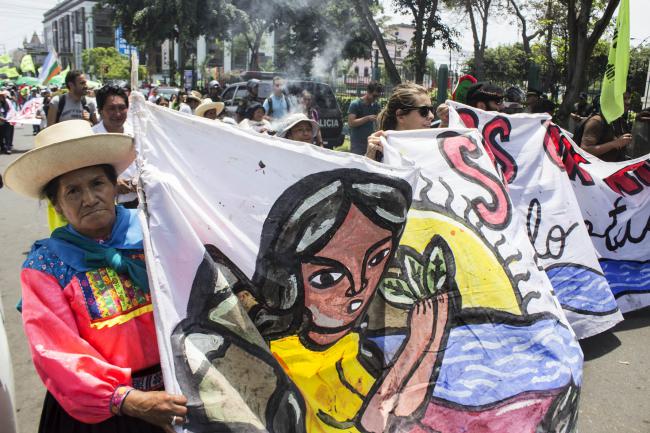 In the shadow of fast-melting glaciers, delegations from around the world convened in Lima, Peru in December 2014 for the twentieth annual Conference of the Parties to the United Nations Framework Convention on Climate Change (COP 20). The summit offered some prospect of breakthroughs on climate change action, beginning shortly after the United States and China unexpectedly announced a landmark agreement to reduce carbon emissions in each respective nation. A cautious optimism turned to frustration, however, as delegates clashed over how emissions should be monitored, what responsibilities rich and poor nations should bear for climate change, and who should pay for mitigation and adaptation measures for people displaced by storms, rising seas, and crop failure.

The Conference of the Parties, held in the walled complex of “El Pentagonito,” the headquarters of Peru’s armed forces, shielded delegates from the voices of a multitude of civil society groups that had also convened in Lima for the People’s Summit on Climate Change. Urging the delegates to take bold steps to address emissions levels and environmental justice issues, the organizers of the People’s Summit declared in a manifesto that “this may be our last opportunity to develop an alternative form of development, one that respects the limits and regenerative capacities of Mother Earth and tackles the structural causes of climate change.”

The conference produced little progress toward a successor agreement to the Kyoto Accords—the UN-sponsored international treaty to reduce greenhouse gas emissions, expired as of 2012—despite United Nations Secretary-General Bank Ki-moon’s entreaties to delegates. “The human, environmental, and financial cost of climate change,” he stated, “is fast becoming unbearable.” In the early hours of the morning on the last day of the conference, Peru’s environment minister Manuel Pulgar-Vidal shuttled compromise language among delegations to produce a cobbled-together agreement, reportedly in order to avert a total conference failure. The agreement was minimal, and without a strong mechanism of enforcement: delegates committed on paper to doing what they could inside the constraints of their domestic politics, and to bringing those voluntary measures to next year’s summit in Paris.

Many environmentalists believed the conference was meant to serve as a showcase for Peru’s standing in international sustainability diplomacy. It may have done more, however, to expose contradictions in current development models in Latin America that pay lip service to sustainability while positing future economic growth on the expansion of extractive industries and export-led agribusiness.

The summit afforded environment minister Pulgar-Vidal gratifying photo opportunities in major news outlets, but many in the global environmental community regarded his PR stint poorly. Only months before the COP 20 meetings, in June 2014, Pulgar-Vidal remained in his post even as the Humala Administration removed nearly all regulatory powers from the Ministry of the Environment, such that the Ministry now has virtually no jurisdiction over water, soil, and air quality standards, and is stripped of its powers to protect environmentally sensitive areas from oil and gas drilling.

This law comes on the heels of another measure, this one announced in March 2014, that grants oil and gas companies the right to conduct seismic tests on indigenous lands without Environmental Impact Statements, and a tandem measure the year prior, in 2013, that exempted all Quechua- and Aymara-speaking peoples from the 2011 Law of Prior Consultation. With this simple redefinition of indigeneity, the government of Peru eliminated any veto power that Peru’s highland communities might have exercised against mining and drilling on their lands or in their watersheds, on the grounds that Quechua and Aymara speaking people were not indigenous, but simply “rural” peoples.