In early November, two unlikely Latino media sites joined to create, as one blogger put it, a Latino “Last Week Tonight.” “The Rebel Report”—a collaboration between the new (hilarious) Flama comedy site and Latino Rebels, a decidedly progressive and political online publication—is a parody show, featuring short Daily Show-esque snippets of news and Latina/o culture. Aside from the humor, which boldly calls out racism, xenophobia, and Latina/o stereotypes, what’s significant about this development is that it’s co-produced by Univision—the biggest Spanish-language network in the United States. 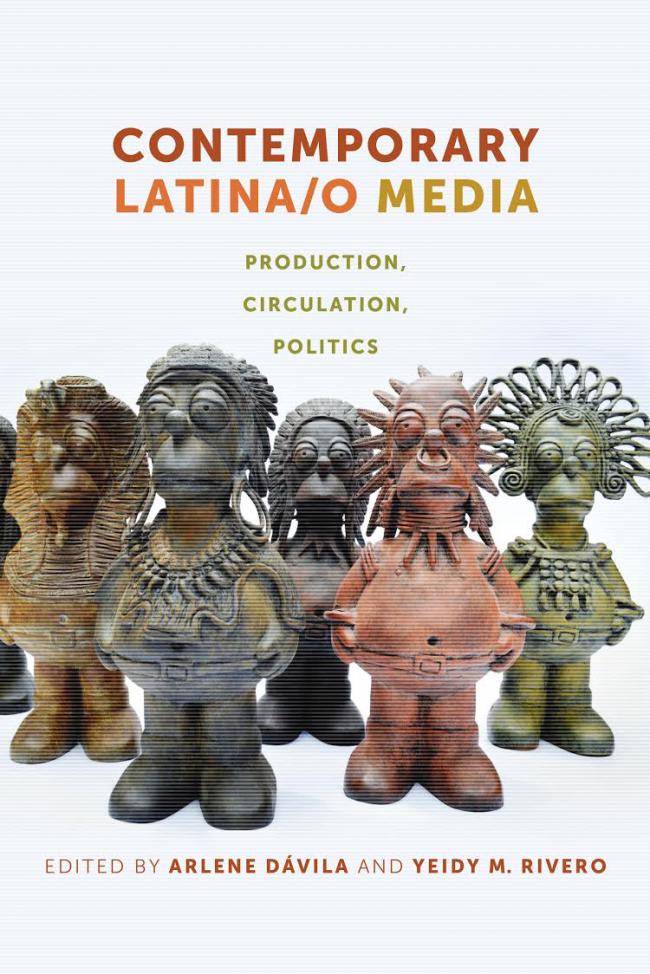 For those of us second- and third-generation Latino millennials raised in bilingual homes in the U.S. mainland, Univision conjures up “Sábado Gigante” and other Spanish-language game shows, horoscopes eloquently recited by Don Walter Mercado, “El Chavo del Ocho,” telenovelas, noticias, and many other types of Spanish language programming. But this new Univision agenda, with products like Flama and Fusion—their news and popular culture network, a joint venture with ABC—perhaps signals a new kind of Latino media, and an acknowledgement that media agencies (and politicians alike) are falling short in their attempts to grab hold of the nation’s largest minority group. But it’s not just about content. It’s about recognizing that Latino programming, web content, and print media fail to represent and meet the needs of an increasingly racially, ethnically, geographically, and linguistically diverse community.

Within this context of change, experimentation, and the continued lack of representation comes Contemporary Latina/o Media, a recently published anthology edited by Arlene Dávila and Yeidy M. Rivero. Through articles by more than a dozen scholars and journalists including Frances Negrón Muntaner, Vanessa Díaz, Ed Morales, Hector Amaya, and Juan González, among others, this book takes a close look at the evolution and future of Latina/o media, reflecting on the complexities, incongruence, and intersectionality of Latino culture, and the fallacy of pan-Latinidad.

The anthology covers everything from social media and YouTube participation to the politics of corporate sponsorship and the experiences of media workers. It also tackles intricacies across languages from mass-circulated Spanish telenovelas to exclusively English news sites like Fusion and lower distribution bilingual online projects like Flama.

The book’s cultural critics argue that Latinidad is packaged and distributed in ways that provide a very rigid set of parameters for what it looks (and sounds) like to be Latino. The ongoing media obsession with actresses Sofia Vergara and Selena Gomez reflects a frustrating continuation of fixation and obsession with the sexy, curvy, spicy Latina with attitude. In television, film, and news media, Latino men continue to be represented as law enforcement or law-breaker; Latina women as domestic workers or nurses. Immigrants continue to be presented broadly as illegal subjects who rely on informal labor for employment.

Contemporary Latina/o Media addresses these tropes, taking readers through the various mechanisms that produce the power structures that prevent Latino producers and actors from being at the table when content is created and distributed. The result is media that perpetuates stereotypes and continues to position Latinos as foreigners and outsiders, all within the context of a racist media infrastructure. According to a study by Negrón Muntaner, while the Latino population has been ballooning over the past several decades—up from five percent in 1970 to 17% today—the number of Latino actors in leading television programs and with leading acting roles overall has remained incredibly low, even dropping since 2000.

Despite calls for increases in newsroom diversity, the numbers of people of color in newsrooms have also decreased in recent years. And as Daisy Hernández recently pointed out in her poignant editorial on race at The New York Times, once they join newsrooms journalists of color are often subject to double standards and racist practices.

This lack of media diversity runs across communities of color, and perhaps feels more insidious for Latinos because of how advertisers, media agencies, and politicians alike are clamoring to capture their attention.

According to Juan Piñon’s chapter “Corporate Transnationalism,” U.S. companies such as Disney, Sony, MTV, Fox, HBO, and NBC are major investors in Latino media—and telenovelas in particular, which continue to occupy an important role in Latino programming. While these telenovelas are produced locally in their countries of origin, they are in fact still largely under the thumb of white, male media investors based in the United States.

Henry Puente’s piece on the emergence of English-language NuvoTV points out that the “older business model” of featuring storylines and characters that are predominantly Mexican and Venezuelan is finally getting some competition in the United States from newer, more diverse programming directed at U.S. Latinos. This more recent programming is challenging the established Spanish-language networks’ static representations of Latinos—ones that ignore indigenous and Afro-Latino communities, and feature characters with a whiter, inaccurately uniform set of physical and cultural attributes.

New experiments in network programming and online media such as Fusion and Flama are increasingly popping up, while older models are shrinking. In 2012, CNN announced it was shutting down CNN Latino. And at the end of 2013, NBC announced it was shutting down NBC Latino and absorbing its reporters into the mainstream site. Instead, new sites like Huffpost Latino Voices and Fox Latino are proliferating.

According to Negrón-Muntaner, Latinos are out-pacing all other groups in online participation sites like YouTube and Facebook, making this form of media a fertile playground for Latino media makers. And as Cristina Beltrán points out in her article about DREAM activism and the “queering” of immigrant rights—through the use of the “coming out” narrative as a political strategy for exposing one’s citizenship status with pride—undocumented youth activists have transformed the use of social media for social change, and have mastered the use of online media to share their stories and build momentum. The anthology portrays online media as a space for experimentation for Latinos of all ages, though particularly millenials and younger, also visible in the growth of less mainstream sites such as La Respuesta, Latino Rebels, and Remezcla.

In an article on alternative media, Ed Morales explores the ways that news media has become increasingly formalized and corporate, reflecting a new consolidation of ownership that has affected independent and ethnic media outlets as well. The decrease in independent news media has coincided with alternative media’s de-emphasis of coverage on communities of color. And both mainstream and independent news outlets are far from achieving proportional representation of editorial staff for any communities of color, in a way that has worsened despite the appearance of heightened multiculturalism in the Obama age.

In addition to statistics on media ownership, audience, and representation, Contemporary Latina/o Media provides compelling looks at the racism and xenophobia that permeate U.S. media production, and rely on a black/white binary that leaves Latino race politics in limbo. Among these articles is Vanessa Díaz’s on paparazzi. A longtime freelancer for People magazine, Díaz’s study on paparazzi photographers, or “paps,” reveals they are predominantly Latino men, and have historically been immigrants (presumably because the job is unregulated and informal—a type of work that can be attractive to immigrants). Often considered a despicable aspect of celebrity-obsessed media culture, paparazzi are the subject of a vitriol that exposes much about racist attitudes towards Latinos. But the celebrity news media industry requires informal labor by people of color in order to function, and conveniently makes them messengers and scapegoats for their own voyeurism. This close-up on paparazzi serves as an unexpected metaphor for the unsung actors in Latino media production.

In addition to the articles discussed, there are others that chart the evolution of the Latino radio industry, the influence of narcorridos—a style of Mexican norteño folk music—on popular culture, and the growth of the television industry in Colombia (with Bogotá being called Bogollywood by some). Articles by Hector Amaya, Deborah Vargas, and María Elena Cepeda take on the ways representations of popular Latino music icons represent the changing face of Latinos in the United States, and the powerful role music can have as a unifying cultural force.

A major takeaway from this epic compendium on Latina/o media is that, undeniably, there are many more Latina/os in the United States than are represented on air and on screen, both behind and in front of the camera. And while the anthology highlights the growing number of projects that create alternative mediatized forms of community and political engagement, it also puts forward strong arguments that make it difficult to see anything but an industry under the grip of a small group of white, male, U.S.-based investors with a very specific idea of the kind of Latina/o they want to see in the U.S.—the kind of Latina/o they can sell, or sell to. They perpetuate stereotypes, simultaneously whitewashing and exoticizing some Latina/os, and demonizing and criminalizing others.

As Arlene Dávila postulates in the introduction, the articles leave you with as many questions as answers, but will serve as an important resource for making structural changes to the way Latino media is made. Authors in this anthology implore readers to acknowledge racist attitudes, to see new digital media as an exciting playground for new forms of participation and experimentation by Latina/os, to challenge whether Latina/o media programming is as abundant and diverse as business reports claim, and to look closely at the power structures disseminating media that continue to lack representation from those they seek to portray.

Von Diaz is a writer and multimedia producer who focuses on Latino food and culture, immigration, and LGBTQ issues. Her work has been featured on NPR, StoryCorps, WNYC, Public Radio International, Colorlines, and Feet in 2 Worlds.