In our final print issue, “Mapping the Moment,” we chart the social and economic conditions shaping both U.S. hegemony and resistance today.
Tweet
Colette Perold
February 10, 2015 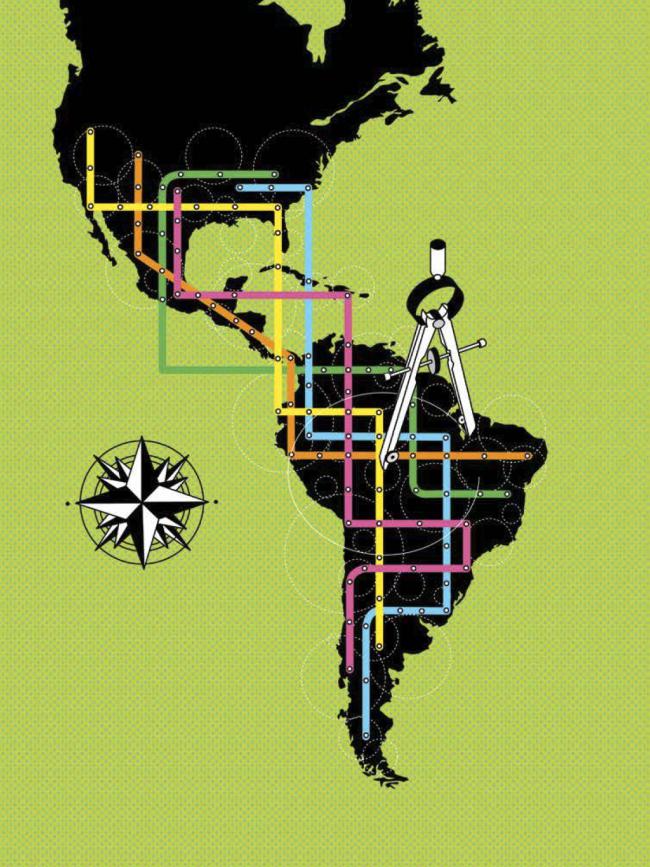 Latin America made headlines more often in 2014 than in any other year in recent memory, punctuating the news cycle with seasonal precision. Last February, opposition protests calling for Maduro’s “exit” erupted in Venezuela. In June, the child migrant upswing at the U.S. southern border reached “crisis-response” levels. In September, the Ayotzinapa massacre was executed and exposed. And in December, Obama reversed the most glaring paradox in U.S. foreign policy with his restoration of diplomatic relations with Cuba. Liberal media offered no surprises in 2014, presenting a view of the U.S. role in Latin America, albeit with tempered criticism, as varyingly benevolent. But how do we on the activist left understand U.S. influence in Latin America today?

An introductory phrase from our 1983 edition, “The Media Go to War: From Central America to Vietnam,” explains Latin American media coverage prior to the Central American civil wars with a curious resemblance to today: it “tended to conform to a simple ‘three C’s’ formula—Coups, Catastrophes and Communism.” Today “communism” has given way to “socialism” and we celebrate the emergence of so-called BRIC and MINT models of capitalist development. But with the continued resonance 32 years later, we chose, in our final print edition, to explore what has changed and what challenges lie ahead.

The ability of the United States to enforce a violent, self-serving political and economic agenda in the region has been at the heart of NACLA’s analysis since we first reported on the U.S. intervention in the Dominican Republic in 1967 or the CIA-backed Chilean coup in 1973. At the same time, we understood the role of the anti-imperialist U.S. left would also be to provide support to movements in Latin America fighting the violence of empire in their own communities.

Despite the centrality of these concerns to NACLA over the past 48 years, much has changed. U.S. hegemony operates largely through “soft power” rather than military coercion; 17% of the U.S. population is Latina/o as opposed to 5% at our founding; and we are now 16 years into a “pink tide” of left-wing governance throughout the region. In light of the changing landscape, how have imperialism and resistance been reconstituted?

In our final print edition, we offer Naclistas a supplemental collection of articles in addition to our regular Report section. In the first, our authors “map the moment” along 10 key lines of inquiry. Alejandro Velasco locates the true legacy of the Latin American left turn, Ed Morales defines the role of U.S. Latina/os within this hemispheric left, and Nicole Fabricant and Bret Gustafson explore the reality of our earth’s finite resources within systemic societal transformation. While Elisabeth Jay Friedman examines the strengths of Latin America’s contentious feminist politics, Annie Wilkinson and Tanya Katerí Hernández explore, respectively, how a movement’s ability to define LGBT and racial identity as linked to class identity—and vice-versa—determines the movement’s success.

In our mapping of U.S. hegemony, Arturo López-Levy argues that Obama’s new Cuba policy is an attempt to reassert U.S. influence in the region, while R. A. Dello Buono and Ximena de la Barra assert that U.S. influence has remained relatively constant through the expansion of free-trade economic policy. Kirsten Weld explores the impact of Edward Snowden’s NSA revelations in light of South America’s growing independence from a U.S. agenda, while Coletta Youngers and Adam Schaffer locate the pushback against the U.S. drug-policy agenda in more unexpected places.

Our Report, “Global Water Grab in the Andes,” opens with a type of anti-mapping by architect Felipe Arturo, who documents the waters that flow from the Andes to the Atlantic through the lens of water flasks that “evade the documentary gaze.” Throughout this Report, our authors demonstrate how global investor markets are uniting with a neoliberal environmental agenda to keep Andean water inaccessible to those who depend on it most.

As we now reconfigure the venue for getting you the best analysis on Latin America, we consider NACLA’s past and future in light of a changing media industry, a changing political landscape, and as Daniel Alarcón mentions in his interview, a changing notion of territory in journalism. Join us on the web, and we’ll continue this mapping together.