Manipulating Human Rights in Honduras: An Interview With Bertha Oliva

On September 21, Honduran president Porfirio Lobo addressed the General Assembly of the United Nations on the issue of human rights. “I ratify our commitment to the Universal Declaration of Human Rights,” he said. “We work daily to promote a culture of respect for human rights, based on permanent processes of dialogue with every sector of society.” Since taking office in January 2010, Lobo has created a Ministry of Human Rights and Justice and championed human rights as one of his government’s “highest priorities.” 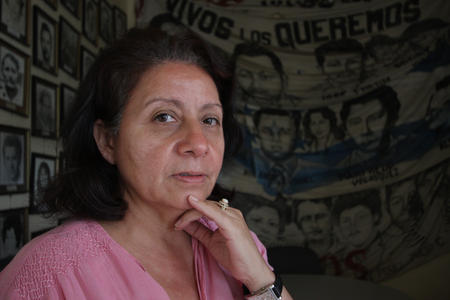 Bertha Oliva, 2009 (credit: James A. Rodríguez)The Obama administration has been an avid supporter. “We welcome President Porfirio Lobo’s strong commitment to strengthen respect for human rights and the concrete steps his government has taken to advance that goal,” said a State Department press release in June. Secretary of State Hillary Clinton has praised Lobo’s policies on human rights, and his work to lift the country out of the political crisis which ignited with the June 28, 2009, coup d’état that deposed democratically elected president Manuel Zelaya. Lobo plans to meet with President Obama in October.

But the analysis and numbers from human rights defenders in Honduras show a gaping schism between Lobo’s human rights discourse and realities on the ground. Within only the first three months of the Lobo administration, the Committee of Families of the Detained and Disappeared in Honduras (COFADEH), a human rights organization founded in 1982, had registered 1,071 human rights violations. According to COFADEH founder and coordinator Bertha Oliva, under Lobo 50 small farmers have been killed, and 10 people have recently been disappeared. Meanwhile, countless homes have burned at the hands of the Honduran military and police in the last year alone. The following interview with Oliva took place on September 20.

The Lobo administration says it defends and respects human rights, but you have documented that the reality is otherwise.

The current regime says it is interested in respecting human rights and reconciling with the Honduran people, but there is an abysmal difference between what it says and what it does. We have seen that they don’t have the slightest interest in investigating and explaining the recent 10 disappearances under the government of Lobo. Our human rights are constantly being violated, and we have no spaces in the country to allow us to believe that they are going to launch a true process to find and stop the masterminds behind these crimes.

It’s true, there is a government ministry [of human rights and justice], but it is inoperative. And as a seeker of justice I can testify that the first obstacle we face is a lack of access to justice. We have a Supreme Court of Justice, which very clearly does not work in favor of the lawsuits against acts committed against justice, but rather endorses this whole process of human rights violations. We are absolutely defenseless. The citizens don’t trust the people who represent the wreckage of the Honduran state leftover from the coup. How can the citizens regain that trust?

I think that Cuba, Venezuela, Bolivia, and Ecuador have taken great strides and are prepared to withstand those criticisms. We wish the Honduran people had the support, backing, and guidance of its government, as is the case in the countries you mentioned. These countries and their governments are concerned about respecting human rights; they accompany their people and guide them from the state to fight for better conditions. In Honduras it’s completely the opposite. Those who have taken the state oppose the people who demand changes. That is the great disadvantage we have.

I see the improvements that the people in the countries you mentioned have. There is concerted political action in favor of human rights. Here it is the opposite; the state is creating policies that threaten human rights. We would like to have support from the government like the support that people in the countries I have mentioned before have. That is the great difference between Honduras and these countries. There, governments are fighting alongside their people, accompanying them to create policies to improve freedoms, to create better conditions, and that is why the U.S. empire is portraying their governments as human rights violators. In the case of Honduras you see the opposite; the people have been vilified, the people are helpless because they are not accepting the position imposed by the Honduran state. We have the worst disadvantage because we don’t have a government that accompanies the people in the search for better living conditions. What we have here is a project against all civil and social rights. The National Congress legislates against the people, for the privatization of natural resources, the selling of the country into pieces, to leave the people without a home. A law against terrorism that targets human rights is created and passed; that is what we find in Honduras.

And we know that the struggle of these governments to enact substantial changes in public policies makes them a target for criticism by the empire that begins referring to them as anti-democratic governments because they are breaking with U.S. hegemony. These countries’ struggles are for independence, and in Honduras it is the contrary, it is the people who rise up for a new path in terms of living conditions, human rights, and constitutional matters. We are so far away from recovering our country that I don’t know how much effort it will require, or how long we will have to wait.

What do you think is the role of the United States and its institutions in politicizing human rights?

I think that with the subject of human rights, one has to be like an eagle, never asleep and always vigilant. Those who have devoted their lives to human rights should be even more vigilant because today in the continent and on the planet, governments can commit horrors in the name of human rights. That is why we believe it is our responsibility to say that human rights are the consecration of life itself, to put our lives in the service of those who suffer, and to not allow someone—organizations or governments—to manipulate the issue. We all see it. Here, they have approved and done many things from the state in the name of human rights. And we could talk about many other countries in similar situations. We have to try to demonstrate that official hypocrisy imposed by governments that violate human rights and who see themselves as their champions.

They want to be seen as champions of human rights, but as long as there are interventions, impositions, and there is hunger, human misery, torture, and lack of liberty, as long as there is judicial punishment for those who do not agree with what governments say, there will be no respect for human rights. Those are not human rights. You cannot say you have a real interest in protecting human rights if you are financing and supporting the violators of human rights. You cannot say, “We are going to do this in exchange for improved human rights,” while at the same time having a complete strategy to say, at some point not so far off, that the human rights conditions have changed. There is an extremely dangerous and manipulative game being played around this issue. That’s why we should be energetic and bind ourselves to the facts of the violations as they are occurring, in order to elevate ourselves, situate ourselves, defend ourselves, and show that the path of human rights is more than a policy imposed by those who believe that they can manipulate the destiny of the people with millions and millions of dollars.

You mentioned that the government has approved several things in the name of human rights. What things specifically?

For example, the current regime has created a Ministry of Human Rights and Justice. But for me, until now, this has served only to sell the image internationally that the government is concerned with human rights, and locally for political clientelism. It also serves to co-opt resources, but not to resolve the problems that the Honduran people are confronting over the constant human rights violations. The Honduran congress has approved a law on the concessioning of natural resources, it has approved a law on model cities,* which is nothing less than the sell-off of the country in pieces. We have already lost victims in the struggle for natural resources. A week ago, an environmental defender in the Atlantic part of the country was assassinated. This shows us that the struggle to defend our natural resources is serious, intense, and we have to put the word out internationally and nationally to denounce and put an end to the continual man-hunt against the defenders of natural resources, the environment, and human rights.

Before, right-wing governments didn’t speak of human rights. They denied their importance. But now, such governments don’t deny them, they accept them, and they say they are going to respect them but they don’t.

It is a total manipulation, and it is part of how sophisticated they have become to continue committing violations and assaults on human rights. Tomorrow Lobo is going to speak in New York, talking about his administration in terms of their respect for human rights, and I wonder if anyone will ask him about the killing of Emmo [Sadloo], for example, an icon for the National Front of Popular Resistance. What would he say about the killing of the journalist in San Pedro Sula, the communicator [Medardo] Flores? The day they buried Emmo, they killed him.

Michael Fox is an editor of NACLA Report on the Americas and the co-author of Venezuela Speaks! Voices From the Grassroots (PM Press, 2010). His work can be found at his blog, blendingthelines.com.

*Model cities are “charter” or autonomous cities that fall outside the jurisdiction of national law, so that unused land is ceded to international businesses or governments for development. Critics liken them to large export-processing zones.