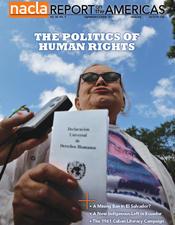 This edition of NACLA collects a handful of essays on the question of human rights in Latin America as a political weapon used by the U.S. government in concert with its right-wing allies in an attempt to discredit those governments in the region that have most aggressively undermined U.S. hegemony. In this respect, today’s Latin American right and its North American allies have taken up the rhetoric of Reagan’s foreign policy, which adopted human rights as its central trope.

A Mining Ban in El Salvador?
Emily Achtenberg
El Salvador is contemplating the first metals mining ban in the world. Movements and organizations are organizing on all sides of the issue. The question is whether the cash-strapped Central American country can afford to ban this investment-rich industry.

The Border: Funneling Migrants to Their Doom
Óscar Martínez
The border between the United States and Mexico is a humanitarian crisis with the whole continent to blame. Migrants are either forced to cross in desolate regions such as the Marfa sector, or funnel through the few gaps left in the border wall, routes controlled by drug-traffickers and bandits.

A New Indigenous-Left in Ecuador?
Jeffery R. Webber
Grassroots resistance is mounting against Ecuador’s president, Rafael Correa. Members from the Confederation of Indigenous Nationalities of Ecuador and other indigenous organizations are building new strategies and organizations “to fight extractivism, neoliberalism, and clientelism.”

Defending Democracy? Human Rights Discourse in Santa Cruz, Bolivia
Nicole Fabricant
In Bolivia, the government of Evo Morales has promoted policies attempting to redistribute wealth and reclaim control over private media, transnational corporations, and mining companies. These policies are affecting powerful conservative interests, and the right wing is responding to defend what it sees as its human rights.
Heroines With Friends in High Places: Cuba’s Damas de Blanco
Lorraine Bayard de Volo
Cuba’s dissident women, the Damas de Blanco, have captured the world’s attention and successfully evoked popular images associated with South American women who organized against repressive regimes during the 1970s. However, as confirmed by recently released WikiLeaks documents, some powerful friends, including the U.S. government, are behind the Damas’ peaceful movement.
How Venezuela’s Right Discovered Human Rights
Gregory Wilpert
An odd role-reversal has taken place in Venezuela, whereby the center-right has adopted the human rights discourse and protest strategies of the left. International human rights organizations and the mainstream media have jumped on board, denouncing the Venezuelan government for countless abuses, ignoring the facts and the context, the past and the present.
Introduction: The Politics of Human Rights
Pablo Morales
Legitimacy Lost: Human Rights Discourse in Washington
Nicole Fabricant
During the Cold War, the U.S. promoted a discourse of security across the Western hemisphere over fears of the communist threat. We are now witnessing a strategic right-wing political platform whereby democracy is equated with free market capitalism, and “human rights violations” refer to new forms of state control over private interests.
Manipulating Human Rights in Honduras: An Interview With Bertha Oliva
Michael Fox
In Honduras, state-sponsored repression is on the rise, even as the Porfirio Lobo government champions human rights as one of its “highest priorities.” Honduran human rights defender Bertha Oliva explains how human rights discourse in Latin America is being transformed from a tool to protect the victims into one for publicity and manipulation.
‘Chaos and Instability’: Human Rights and U.S. Policy Goals in Cuba
Arturo López-Levy
With the end of the Cold War, the United States began to justify its embargo against Cuba as a policy of human rights. Despite the discourse, the embargo itself violates basic principles of the human rights model established by the UN Universal Declaration of Human Rights.

Argentina: Beyond the ‘High Dollar’
Martín Schorr
Argentina has experienced record economic growth, and the devalued peso, or the “high dollar,” as it is known, is at least partially responsible. But while this financial strategy is widely accepted in Argentina across the political spectrum, it has been profoundly limited.