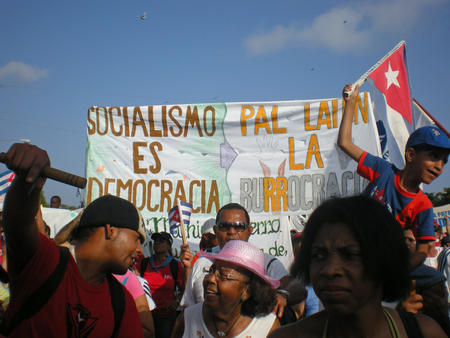 Network activists at the May Day March in Havana, 2010. (credit: Jimmy Roque Martínez)In recent years, pro-revolutionary but generally anti-bureaucratic groups have emerged in Cuba, born at the margins of institutionalism and inclined toward self-management and participatory leadership. One of the more prominent is the Protagonistic Critical Observatory Network, an alliance of collectives representing a broad spectrum of left-wing political positions—together with artistic endeavors, environmentalism, spirituality, and opposition to gender and racial discrimination (observatoriocriticodesdecuba.wordpress.com; the author is a member).

Established in 2007 during national meetings of the Saíz Brothers Association, the arts and culture wing of the official Union of Communist Youth, the Critical Observatory convenes yearly meetings and publishes newsletters, both in print and online. Its members engage in a variety of activities, from coastal cleanups to gardening and tree-planting initiatives to campaigns for animal vaccinations. They have also participated in activities organized by other collectives—such as demonstrations in support of nonviolence and commemorative demonstrations against racism in Havana—as well as in mass demonstrations organized by the state. During May Day marches in 2008, 2009, and 2010, members carried signs reading. “Down With Bureaucracy,” “Long Live the Workers,” and “More Socialism.”

Some of the network’s collectives include the following:

• El Guardabosques (the Forest Ranger): an ecological project that campaigns for reforestation and against the mistreatment of forests.

• Ahimsa: a project promoting the ideals and practice of nonviolence.

• Socialismo Participativo y Democrático (Participatory and Democratic Socialism): a collective that elaborates proposals for self-managed socialism as a possible future for Cuba.

• Cofradía de la Negritud (Brotherhood of Blackness): an Afro-Cuban rights group whose work has been essential to the critique of racism in Cuba creating a space for the study and analysis of racial issues.

• Salvadera (Sandbox): a community ecological project that works in Reparto Eléctrico, a poor neighborhood on the periphery of Havana, on the protection of animals and plants.

There are also bloggers and alternative journalists whose work mirrors or complements that of the Critical Observatory: Bloggers Cuba (bloggerscuba.com), the portal Havana Times (havanatimes.org), Inter Press Service’s Cuba-focused site (ipscuba.net), and the Espacio Laical project (espaciolaical.org). Furthermore, one of the strengths of these collectives is their connections to and solidarity with anti-capitalist and anti-authoritarian struggles in other countries. Internationally, the Critical Observatory has maintained exchanges with representatives of the Brazilian Landless Workers’ Movement, Mexico’s Zapatista communities, and U.S. and European movements against free trade agreements and international financial institutions. They are also linked to various cultural, environmentalist, and libertarian collectives in Argentina, Chile, Mexico, and Venezuela.

For these collectives, which contest the state’s exclusionary and retaliatory position, the right to create autonomous and participatory spaces is both possible and necessary. Government authorities have repeatedly and, in general, unsuccessfully attempted to stop these activities and weaken the network. They have spread defamatory rumors and threatened to fire (or have fired) people from their jobs; the members of several collectives have been visited at home and work by internal affairs officers; and surveillance has been kept on members in their communications and during public events. So far, however, there has been no criminal prosecution—a sign, perhaps, of the ambiguous official position toward collectives like the network, and the political and moral costs of representing them as “counterrevolutionary” and as “imperialist agents.”