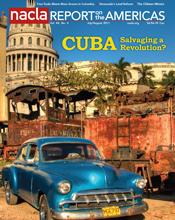 In this issue, we consider the new economic reforms announced by the Cuban leadership that aim to resuscitate a floundering economy that, as noted in the Introduction to the issue, “is incapable of producing the minimum supply of goods, services, and tax revenue needed to provide for the basic needs of the population.” What are the implications that Cuba’s new economy will have for social policy? How has the legacy of the Special Period in Cuba not only changed many Cubans’ attitudes toward their lives but also opened up new cultural spaces for expression and participation? What is the latest assessment of racial equality and gay tolerance on the island? Have U.S.-Cuban relations under the Obama administration been a case of missed opportunities for improvement? This issue of the NACLA Report on the Americas attempts to answer these important questions and more.

Beneath the Underdog: Drugs and Incarceration in the Americas
Suzanna Reiss
The United States imprisons more of its own citizens than any other country in the world, and in 2009 half of U.S. federal prisoners were serving time for nonviolent drug offenses. Unfortunately, the United States has exported this destructive model to Latin America through the drug war. Several recent reports and the hunger strikers at the Pelican Bay State Prison in California are now calling for a revision of these failed policies.

Buenaventura, Colombia: Where Free Trade Meets Mass Graves
Kelly Nicholls and Gimena Sánchez-Garzoli
In April, President Obama and Colombian president Juan Manuel Santos reinitiated discussions on establishing a free trade agreement. The agreement had been on hold in the U.S. Congress because of grave concerns about Colombia’s labor and human rights record, but it is now scheduled to be implemented by the end of the year. The Colombian port city of Buenaventura will likely be one of the most directly affected places, at a very high cost to the local community.

Changes From Below: New Dynamics, Spaces, and Attitudes in Cuban Society
Katrin Hansing
The continuing economic crisis in Cuba has not only changed many Cubans’ attitudes toward their lives but has also opened up new cultural spaces for expression.
Changes in the Economic Model and Social Policies in Cuba
Mayra Espina Prieto
Reforms proposed at the Sixth Communist Party Congress represent a new, third phase of social policy in post-revolutionary Cuba. This new stage has the potential to strengthen social equity in Cuba, improve the socio-economic situation of disparate social groups, and overcome the old limitations of social policy. Yet it could also increase inequality, and at least in the short term, its predicted impacts will be contradictory and ambivalent.
Cuba’s Pharmaceutical Advantage
Marguerite Rose Jiménez
After significant investment and a slow entry into international markets, Fidel Castro’s “billion dollar gamble” on the home-grown Cuban pharmaceutical industry now seems poised to pay off.
Introduction: Salvaging a Revolution?
Eric Hershberg
In April, the Sixth Congress of the Communist Party of Cuba approved the most profound reforms that the island had seen since the 1960s. They are meant to revive the flagging economy. But are they sufficient? Will they succeed in reducing the hemorrhaging of state resources and increasing productivity, while enhancing social welfare? What will become of the thousands of laid-off public-sector workers? The jury is still out, and the answers to these questions will depend on the implementation of the reforms themselves.
Kind Attention: An Overture Rebuffed in Havana
The Protagonistic Critical Observatory Network
On April 29, the Protagonistic Critical Observatory Network (Red Protagónica Observatorio Crítico), an autonomous group of Cuban activists and intellectuals, received the following invitation via e-mail from the U.S. Interests Section in Havana.
Making-Up Is Hard to Do: Obama’s ‘New Approach’ to Cuba
William M. LeoGrande
It once appeared as if President Obama were proceeding toward a new Cuba policy. He ended restrictions on Cuban American remittances and family travel to Cuba, as promised. Havana was receptive, but there were dark clouds on the horizon.
New Autonomous Formations in Cuba
Armando Chaguaceda
In recent years, pro-revolutionary but generally anti-bureaucratic groups have emerged in Cuba. One of the more prominent is the Protagonistic Critical Observatory Network, an alliance of collectives representing a broad spectrum of left-wing political positions—together with artistic endeavors, environmentalism, spirituality, and opposition to gender and racial discrimination.
Race and Income Inequality in Contemporary Cuba
Alejandro de la Fuente
Despite fragmentary data, several studies have shown that racial inequality has worsened in Cuba since the 1990s. Anti-discrimination policies, at a minimum, seem necessary if the Cuban revolution is to salvage its anti-racist legacy.
The Promise Besieged: Participation and Autonomy in Cuba
Armando Chaguaceda
In the face of inadequate Cuban state policies of citizen participation, autonomous groups are emerging from society, in hopes of greater citizen empowerment.
The Rise of Gay Tolerance in Cuba: The Case of the UN Vote
Noelle Stout
In November 2010, a UN vote ignited a public controversy on the island, as Cubans accused government leaders of failing to protect the rights of gay people. The controversy also illuminated the changing role of post-Soviet civic society in creating government policies toward sexual minorities.

Refusing to Hear: Press Coverage of the Chilean Miners
Steven S. Volk
The rescue of the 33 Chilean miners was, countless newspapers and magazines informed us, the “most triumphant” story of 2010. But it was also one of the most sophisticated and dexterous public relations campaigns ever mounted, one that executives will study for years.