On October 21, Bolivian president Evo Morales announced an agreement banning construction of a controversial highway through the Isiboro-Sécure Indigenous Territory and National Park (TIPNIS) ecological reserve. The event marked an historic victory for lowland indigenous groups that, beginning in August, had marched 360 miles from the Amazon basin to the highland capital of La Paz to protest the highway construction. It was also a stunning reversal for Morales who, just two months earlier, had vowed that the road would be built “like it or not.” 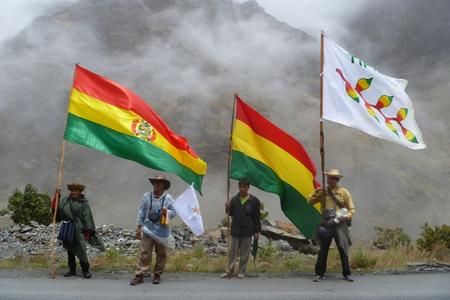 TIPNIS march approaching La Paz (credit: Dario Kenner)For the Movement Toward Socialism (MAS) government and Bolivia’s “process of change,” as Bolivians describe their country’s new political direction, the TIPNIS conflict has been a defining political moment. Morales has long held that the proposed highway through the TIPNIS—a 3,860-square-mile reserve in central Bolivia that is collectively owned by the Yuracaré, Moxeño, and Chimáne peoples—is critical to Bolivia’s economic development.

The road, he argues, would integrate the country’s Amazonian and Andean regions, a dream since Bolivian independence. A direct route to Cochabamba for the Beni department’s meat and agricultural products would cut transportation time in half and conveniently bypass Santa Cruz—the heart of the conservative opposition to Morales’s government. The road would also improve market access for farmers of coca and other crops in the Chapare region of Cochabamba, an important MAS constituency, while bringing services and opportunities to indigenous groups inside the reserve.

The road is also part of a proposed cross-continent highway, which would give Brazil access to Pacific ports. Brazil is an important economic partner for Bolivia, importing 70% of its natural gas and investing heavily in its infrastructure, hydrocarbons, and agribusiness sectors. In 2008, Morales signed a $415 million contract with Brazilian conglomerate OAS to build the Beni-Cochabamba road. The Brazilian government agreed to provide a loan financing 80% of the project.

But indigenous lowland groups say the highway would destroy one of the world’s most biodiverse regions, with unique flora and fauna, and forests that help to regulate water and climate cycles. The highway could open the TIPNIS to transnationals, such as the Brazilian state oil company, Petrobras, which owns one of three unexploited petroleum concessions inside the park. It would also encourage access by loggers, cattle ranchers, narco-traffickers, and “colonists” (migrant farmers from the highlands), whose expansionist interests pose a continuing threat to the environment.

Despite predictions from Bolivia’s Nature Foundation that 64% of the TIPNIS would be deforested within 18 years of the proposed highway’s construction, Morales refused to evaluate alternative routes outside the park. Moreover, the government failed to seek the “free, prior, and informed consent” of indigenous residents before signing the construction contract and securing financing for the road, as mandated by the Constitution and international accords, which Bolivia has ratified.

In June, Morales inaugurated construction (under the same Brazilian contract) on the two road segments leading to and from the TIPNIS. On August 15, about 1,000 indigenous TIPNIS residents and supporters from Bolivia’s lowland and highland indigenous federations responded, beginning their cross-country trek. The marchers included families with children, pregnant women, youth, and elderly activists, including a 99-year-old man.

Over the course of their 65-day pilgrimage, the marchers endured adverse weather, food and water shortages, punishing high altitude, and vigorous efforts by government officials to demean and discredit the mobilization. In addition to accusing the marchers of consorting with suspect NGOs, right-wing opposition forces, and the U.S. embassy to destabilize his government, Morales infamously urged pro-MAS cocalero youth to “go out and seduce the Yuracaré women,” to win their support for the TIPNIS road.

As the government’s rhetoric escalated, the marchers’ position hardened. They rebuked repeated efforts by cabinet ministers to dialogue along the march route, broadened their demands to a 16-point agenda, and insisted on negotiating only with Morales. The protest gained support from workers, students, indigenous groups, and middle-class sectors throughout Bolivia, as well as international organizations critical of Morales’s “double discourse” on the environment and indigenous rights. Meanwhile, campesinos, colonists, and civic and business groups stepped up activities in support of the road. 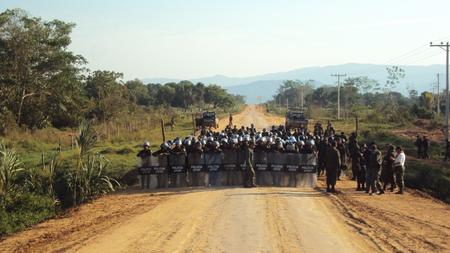 Morales publicly repudiated the repression and asked for forgiveness, but denied responsibility for the attack, suggesting that a disgruntled police faction seeking to destabilize the government might be to blame (investigations are ongoing). He symbolically suspended construction on the TIPNIS portion of the highway (which had not yet been authorized), while continuing to defend it, calling for a referendum in the Beni and Cochabamba departments. Morales’s approval ratings dropped to 37%.

Determined that their constitutional rights in Bolivia’s plurinational state should not be subject to majority vote, the TIPNIS marchers regrouped and continued their final trek to La Paz. On October 19, they arrived to a tumultuous popular reception. Less than a week earlier, 43% of Bolivian voters had invalidated their ballots—in some cases marked “TIPNIS”—in a judicial election widely viewed as a referendum on the MAS government.

With several hundred indigenous protesters camped out in front of the heavily guarded government palace, and the escalating potential for more police violence, Morales made his historic decision. In less than 72 hours, he directly resolved the marchers’ 16 demands, and signed a law permanently canceling the TIPNIS portion of the highway and protecting the indigenous territory as an “untouchable” zone.

Morales called his reversal an enlightened act of gobernar obedeciendo (governing by obeying the people).Opponents say political pressure forced the president to promulgate a law he does not support. In any case, there appears to have been a belated political recognition that the lowland indigenous groups cannot be readily dismissed. Despite constituting less than 10% of Bolivia’s population, they have acquired disproportionate moral and political force through their effective ability to mobilize.

“We can’t conceive of the plurinational state we are building without the lowland indigenous people,” said Morales’s chief of staff, Carlos Romero, marking a decisive shift in the government’s attitude.

Still, lowland indigenous groups remain wary of Morales’s intentions. At the same time, his reversal on the TIPNIS road has provoked outrage among campesinos, cocaleros, and colonists, who have been the traditional bastions of MAS support. These sectors view the road as critical to their economic livelihoods and now feel betrayed by Morales—even though Brazil says it may be willing to cover the higher cost of an alternative route connecting the two highway segments already underway.

The TIPNIS conflict has effectively ruptured the Unity Pact, an alliance of Bolivia’s five major social movements (campesinos, colonists, peasant women, and highland and lowland indigenous federations) that has been the main force behind the Morales government and Bolivia’s “process of change.” Underlying this conflict is a deeper dispute about the direction of development in Bolivia. Should it continue to rely on extractive activity and related infrastructure expansion to maximize urgently needed revenues for social and economic programs or emphasize alternatives more compatible with the environment and indigenous rights? How much land should be redistributed to indigenous communities, and how much to small farmers seeking new frontiers?

The Unity Pact’s indigenous- and campesino-identified members have long held contrasting views on these issues, stemming from their different cosmovisions, views on land tenure, and forms of social and political organization. For a time, these differences were submerged through a (more or less) common identification of all sectors with the MAS government and Morales. The TIPNIS conflict—pitting highland campesinos and colonists against lowland indigenous groups—has forced these divisions to resurface and dramatically exacerbated them.

How these social forces will reconfigure in the coming months, and what their relationship will be to the MAS government, depends a great deal on whether the government and the social movements can agree on a new development agenda for Bolivia. In the meantime, it’s inspirational to witness a popular mobilization that takes a stand against police repression, reminds a president of the principles he claims to champion, and succeeds in changing his position.

Emily Achtenberg is an urban planner. She has written extensively on the TIPNIS conflict in her weekly NACLA blog, Rebel Currents, covering Latin American social movements and progressive governments (nacla.org/blog/rebel-currents). She last visited Bolivia in September.