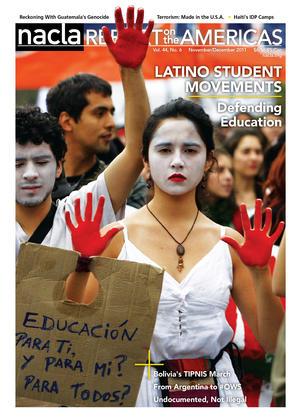 Across the Americas conservative politicians are gutting education and raising student fees, co-opting legislation and banning intercultural classes. But Latino student movements are fighting back. For months in Chile thousands of students have taken to the streets to demand free universal education and an end to the leftover neoliberal policies of Chilean dictator Augusto Pinochet. Over the last two years, despite brutal police violence, California university students have occupied campuses and rallied against hefty tuition hikes and austerity measures. In Tucson, Arizona, high school students have stood up to save their beloved Mexican American Studies program. Across the United States, the undocumented youth movement is increasingly using direct action to bring attention to broader issues of immigrant, civil, and human rights. This NACLA Report gives voice to Latino student movements across the region that are standing up to the crises, cutbacks, and repression.

Road Rage and Resistance: Bolivia’s TIPNIS Conflict
Emily Achtenberg
On October 21 Bolivian president Evo Morales banned construction of a controversial highway through the TIPNIS ecological reserve. The event marked an historic victory for lowland indigenous groups that had marched 360 miles to protest the road. However, the TIPNIS conflict has effectively ruptured the grassroots alliance behind the Morales government, revealing a deeper dispute about the direction of development in Bolivia.

Do It Yourself: International Aid and the Neoliberal Ethos in the Tent Camps of Port-au-Prince
Valerie Kaussen
Since 2010, the International Organization for Migration has coordinated several communications projects aimed at empowering Haitian tent camp residents. There is nothing wrong with encouraging people to take charge of their lives, but these projects are placing the responsibility for aid failures on the Haitian people while promoting a neoliberal “do it yourself” ideology.

Horizontalism: From Argentina to Wall Street
Marina Sitrin
Occupy Wall Street has been rooted in the practice of democratic decision-making, or “horizontalism.” But this horizontal democracy didn’t start at OWS, nor in Madrid’s Puerta del Sol plaza or Tahrir Square. It has a long history. Perhaps the most defining predecessor to the present-day struggle of “the 99%” is the Argentine community organizing that exploded exactly a decade ago, amid that country’s 2001 economic crisis.

A Dream Detained: Undocumented Latino Youth and the DREAM Movement
Arely M. Zimmerman
The undocumented youth movement in the United States is transforming—from a movement that was initially focused on building support for the DREAM Act to one that is increasingly using direct action to bring attention to broader issues of immigrant, civil, and human rights.
Introduction: Latino Student Movements
A Letter to the DREAM Movement
Raúl Alcaraz Ochoa
I have come to a deeply painful decision: I can no longer in good political conscience support the DREAM Act because the essence of a beautiful dream has been detained by a colonial nightmare seeking to fund and fuel the U.S. empire machine.
The Fight for Mexican American Studies in Tucson
Nolan L. Cabrera, Elisa L. Meza, and Roberto Dr. Cintli Rodriguez
On April 26, members of the youth collective UNIDOS occupied a Tucson School District board meeting, where members were prepared to effectively dismantle the local Mexican American Studies program. The students saved the program, and reignited the movement in the fight for ethnic studies.
Occupying Education: The Student Fight Against Austerity in California
Zachary Levenson
Two years before the recent wave of occupations across the country, California students were occupying universities against hefty tuition hikes. Now, despite police repression, mobilizing is again on the rise. But will students be able to shut down their campuses indefinitely in order to demand an end to austerity?
Chilean Students Challenge Pinochet’s Legacy
J. Patrice McSherry and Raúl Molina Mejía
In May, Chilean students took to the streets to call for free, quality, universal public education. Now after seven months, the students have built a powerful mass movement that is demanding nothing less than the democratization of the Chilean state and an end to Pinochet-era policies.
Demanding the Right to Education: Student Voices From Chile and Puerto Rico
Michael Fox
Student leaders José Ancalao Gavilán (Chile) and Giovanni Roberto (Puerto Rico) describe their local struggles for the right to education, against the world financial crisis, budget cuts, tuition increases, and police repression.

New & Noteworthy
NACLA
Reckoning With Guatemala's Genocide
Elizabeth Oglesby
Granito: How to Nail a Dictator directed by Pamela Yates and produced by Paco de Onís, 2011, 103 mins., Skylight Pictures (skylightpictures.com)
Terrorism: Made in the U.S.A.
Hobart Spalding
Voices From the Other Side: An Oral History of Terrorism Against Cuba by Keith Bolender, Pluto Press, 2010, 220 pp., $21.00 (paperback)

Undocumented, Not Illegal: Beyond the Rhetoric of Immigration Coverage
Angelica Rubio
Pulitzer Prize winner Jose Antonio Vargas’s recent announcement disclosing his status as an undocumented immigrant put a face on the millions of undocumented immigrants living in the shadows of U.S. society. Unfortunately, rather than participate in the discussion, the mainstream media ignited a firestorm. The Vargas story is a telling example of the media coverage of the immigration debate in the United States in recent years—inaccurate, incomplete, and insufficient.