At least since the “pingüino” uprising of 2006, students have been an active part of the attempt to reform Chile’s educational system and, increasingly, to remove neoliberalism’s grip on the country. The history of the organized student movement goes back to the early part of the 20th century (see Frens-String), forming an important part of Popular Front projects in the 1940s, and was active in the radicalization of politics in the 1960s, according to Francisco Figueroa, a student leader at the University of Chile in 2011. Karol Cariola, president of the student federation at the University of Concepción in 2010 and now general secretary of the Communist Youth of Chile (JJCC), agrees. As she recently argued, “It was precisely the education reform in 1967 that marked the beginning of a process of transformation that ended with the construction of the Popular Unity.”

As the 40th anniversary of the coup approached, a number of current student leaders considered the impact of the Popular Unity (UP) on their own movement in a series of conversations with the author. The discussions, all of which took place in June or July 2013, highlighted the way that the present was allied to the past both historically speaking and in highly personal ways. 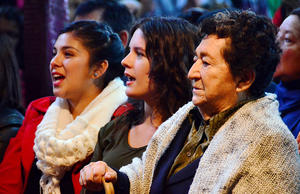 “When social movements gain strength, they reconnect themselves with the past,” argues Mario Garcés, a historian at the University of Chile. “In the case of Chile, what past are they going to connect with? Inevitably with the past before the dictatorship, and that is the Unidad Popular.” For today’s students, he continues, “Allende is a myth, he’s a legend. But he’s a myth of politics connected to society,” and many of the student demands put forward in 2011 resonated strongly with UP programs, including demands to renationalize Chile’s lucrative copper industry and reform the health care system, as well as more specific calls to extend and broaden access to higher education.

While family is not destiny, it is not a surprise that many of the current generation of student leaders are children of political activists from the 1960s and 1970s. Paul Floor, who served as president of the student federation at the Federico Santa María Technical University and joined the JJCC when he was 17, notes that his parents were active in the Communist Party during the UP period. The same was the case for the student movement’s best-known leader, Camila Vallejo, who led the University of Chile’s student federation during the 2011 uprising. Both her parents were members of the Communist Party during the 1970s. She joined the JJCC while a university student and is currently running for a congressional seat as a member of the party from La Florida in Santiago.

Nor are family connections limited to the Communist Party. Miguel Crispi, the current leader of the student federation at the Catholic University of Chile, directs the New University Action party, which he founded in 2008. His father, José Miguel Crispi, headed the federation of private secondary school students in 1971. The younger Crispi helped establish a center at the Catholic University to provide education for workers, inspired by similar programs that were created during the UP period.

For years, the memory of the dictatorship kept student leaders at a distance from Allende and the Popular Unity period. Mario Garcés argues tellingly that the transition period that led from military to civilian rule was predicated on maintaining “a certain silence,” and that “silence was the Unidad Popular.” Thus, the return of the student movement since 2006 and its ability to forge links back to the Allende period is a critical development. As Chilean journalist and professor at the University of Chile, Faride Zerán, explains, the student movement has at its heart a “demand that’s very universal right now to Chilean society…a demand to democratize access to education.” For Garcés, a further step is needed. Students active in the current movement, he argues, are “looking to reclaim the contact that historically existed between…students and…workers.” That, he concludes, “is the echo of socialism. It’s the echo of a unique past.” It is the echo of Allende.

Peter D’Amato is an MA candidate in NYU’s Journalism and Latin American Studies joint program. He reports on politics and environmental issues.

Read the rest of NACLA's Fall 2013 issue: "Chile 40 Years Later: The Politics of Memory and the Memory of Politics"