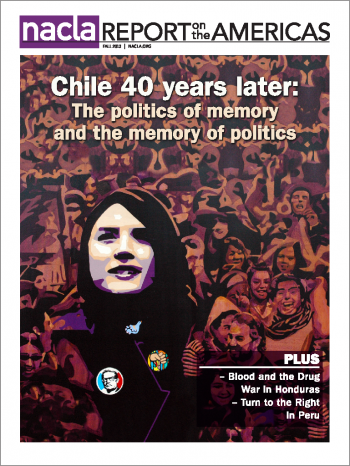 Our goal in this issue is not to relive the hopes of the days prior to the coup or to re-experience the times of terror following it, but to understand the impact that these events have made on how we now experience neoliberal constraints and practice progressive politics; we hope to trace what is different because of those events.

Remembering Benjamin Kohl
Nicole Fabricant and Andrew Canessa
To all who knew him, the news of Benjamin Kohl’s passing came as a shock. The man who filled a room with laughter, vivacity, and passion was suddenly gone and the appalling irony was obvious: Benjamin Kohl led with his heart and it was his heart that failed him long before his time at the age of 59.

Peru: Humala Submits to the United States and the Mining Industry
Gerardo Renique
On April 28, 2013, Peruvian President Ollanta Humala delivered a speech with major implications for the future of democracy in Peru. Referring to Peruvian and international laws guaranteeing indigenous peoples the right to free, prior, and informed consultation on development projects in their communities, the president declared that “there are no native communities … in the [Andean] highlands; the majority are agrarian communities."

Detained in Obscurity: The U.S. Immigrant Detention Regime
David Hernández
Prison inmates are generally placed in solitary confinement for allegedly endangering other inmates or for suspected, often unproven, gang affiliations. In immigrant detention centers, however, solitary is used for a far more arbitrary set of reasons by federal, local, and private jailers, including when detainees break rules, talk back, refuse meals, or for the “protection” of LGBTQ or mentally ill immigrants.

A Journey in Exile
Raúl Zibechi
We who survived and found ourselves heading to exile took the opportunity to begin a new life, to come to know other realities and to embark on different paths to continue transforming the world. Observed from a distance of four decades, it’s a strange privilege that was not within the grasp of the thousands who were killed, disappeared, tortured or silenced.
A New Politics for a New Chile
Joshua Frens-String
There is a new politics in Chile that does not sideline social movements from political decision-making but rather works with and through the organization of such movements to build a truly “popular” electoral front—while challenging “Politics.”
Chile: A Schizophrenic Country
Ximena de la Barra
Chile is neither democratic nor developed. It is an unjust country where citizens have been transformed into consumers, and whose rights now depend on their relative purchasing power. It is a country of workers who have been pushed into consumerism and individualism, overwhelmed and indebted.
From the Fringes of Empire: U.S. Third World Feminists in Solidarity With Chile
Tamara Lea Spira
Third World struggles formed the groundwork for the cultivation of an anti-racist feminist consciousness in the United States. In addition to crossing the borders of geography, U.S. Third World feminists utilized poetry—crossing the border of art and politics—in their efforts to build broad-based solidarities.
Memory’s Manifestations: Salvador Allende in La Pincoya
Clara Han
The urban poor tend to be taken up as victim of neoliberal reforms and repositories of memories of past political struggles. Yet, we might ask how such characterizations rely on and sustain a notion of a homogenous urban poor. With such a notion, it may be difficult to appreciate the finer, smaller struggles that go on every day.
The Mapuche Movement, the Popular Unity, and the Contemporary Left
Patricia Richards
Many politicians on the left continue to frame Mapuche concerns in terms of social class, perhaps admitting a need for increased access to land, education, healthcare, and so forth, but conceptualizing all of these as socioeconomic problems, thereby denying the longer history of colonial dispossession.
The Politics of Memory and the Memory of Politics
Steven S. Volk
Our goal in this issue is not to relive the hopes of the days prior to the coup or to re-experience the times of terror following it, but to understand the impact that these events have made on how we now experience neoliberal constraints and practice progressive politics; we hope to trace what is different because of those events.
Today's Student Movement and the Popular Unity
Peter D'Amato
The transition period that led from military to civilian rule was predicated on maintaining “a certain silence.” Thus, the return of the student movement since 2006 and its ability to forge links back to the Allende period is a critical development.

“This American Life” Whitewashes U.S. Crimes in Central America, Wins Peabody Award
Keane Bhatt
Throughout the 1980s, when U.S. officials were most viciously engaged in Central America, they could depend on media outlets as their reliable partners. This American Life’s “What Happened at Dos Erres” mimicked some of the most propagandistic media behaviors of the 1980s-era media, hiding for its millions of U.S. listeners the murderous policies of their elected officials, executed with their tax dollars and in their name.

Collateral Damage: Blood and the Drug War on the Miskitu Coast
Kaelyn Forde
Juana was six months pregnant when she was shot in the heart and killed along with three other people during a joint counter-narcotics operation by the Honduran police and the U.S. Drug Enforcement Administration (DEA) on May 11, 2012. Among the dead were 14-year-old Hasked Brooks Wood, 21-year-old Emerson Martinez, and Candelaria Pratt Nelson, a mother of six.

Popular Unity Government: Basic Program
Popular Unity
In our March 1971 issue, NACLA offered an English-language translation of the Basic Program of Chile’s just elected Popular Unity government. “As far as we know,” wrote NACLA’s editors, “this is the first time the UP program has been presented to the English-speaking public. Unlike many political platforms, it is a fascinating document, which lays out the principal problems facing the Chilean people and a blueprint of a socialist solution to these problems.” As part of our ongoing “From the Archives” series, we offer excerpts from the program here, with a particular focus on the UP’s program of economic transformation.