Recently declassified documents confirm what researchers have long claimed: that Australian intelligence worked with the CIA to instigate a coup in Chile during the Cold War. 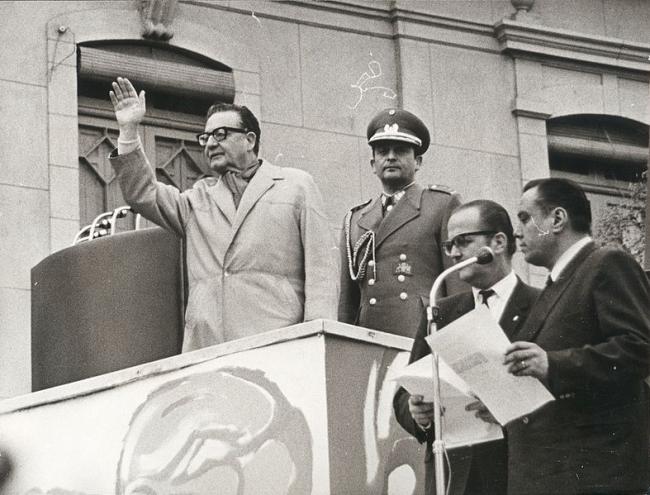 On June 2, the Australian government conceded for the first time that the Australian Secret Intelligence Service (ASIS) supported CIA covert operations in Chile in the early 1970s. These operations created the climate for a coup against the democratically elected socialist president Salvador Allende and his Popular Unity government. The National Security Archive (NSA) recently published some of the ASIS’ station reports in Santiago, and the story has drawn attention in the Australian media.

The subject of ASIS and the Australian Security Intelligence Organisation (ASIO) activities in Chile have been the subject of inquiry by journalists, politicians, and researchers for decades. But the Australian government has long worked to cover its paper trail in Chile. Even though the declassification of these documents for the first time is a significant development, few details are revealed by the heavily redacted documents beyond the admission that Australia had an ASIS station in Santiago and collaborated to some degree with the CIA.

Clinton Fernandes, a professor of politics at the University of New South Wales began the process to declassify the ASIS’ station reports in Chile in 2017 with barrister Ian Latham and solicitor Hugh Macken. According to Fernandes, when he started searching for the archives on ASIS records in Chile, the Australian “government's response was that we can't even confirm or deny the existence of records.”

On May 26, Fernandes and his legal team filed a 16-page set of arguments for the declassification of ASIS records on Chile and in early June, Fernandes was finally given files on ASIS activities in Chile.

Fernandes was not the first to look into ASIS’ activities in Chile in the early 1970s. Journalist Ian Frykberg published an article in October 1974 in the Sydney Morning Herald citing two former intelligence agents who claimed it was likely that the Australian mission in Chile was working with the CIA by “acting as the conduct for money passing from the CIA to newspapers and individuals leaking propaganda information to newspapers and other influential people.”

On December 2, 1974, Clyde Cameron, the Labor and Immigration Minister wrote to the Attorney General Senator Lionel Murphy about ASIO agents in Chile.

“I am particularly disturbed to learn that ASIO agents have been posing as migration officers in South America,” Cameron wrote, “and I am now convinced—though firm denials are to be expected—that the reports of ASIO collaboration with the CIA in bringing about the overthrow of the Allende Government is very close to the mark.”

In 1977, a Royal Commission into Australia’s Intelligence and Security (popularly known as the Hope Royal Commission) was tabled before the Australian Parliament. At the commission, Prime Minister Gough Whitlam stated: “It has been written—and I cannot deny it—that when my Government took office, Australian intelligence personnel were working as proxies of the CIA in destabilising the government of Chile.”

In 1983, Seymour Hersh published a biography on ex-U.S. Secretary of State Henry Kissinger entitled The Price of Power. In that book, the New York Times investigative journalist claimed that since the CIA was aware that its agents were under close surveillance by the new Allende administration, Washington turned to its allies— in this case, Australia. By 1971, Hersh argues that the CIA station in Santiago “was collecting the kind of information that would be essential for a military dictatorship in the days following a coup–lists of civilians to be arrested, those to be provided with protection, and government installations to be occupied immediately.” A year later, Australia “agreed to monitor and control three agents on behalf of the CIA and relay their information to Washington.”

Australia’s involvement in the events following the coup continued for decades. In 1989, journalists Brian Toohey and William Pinwill published a book on ASIS entitled Oyster: The Story of The Australian Secret Intelligence Service. Another Labor administration in Canberra took the authors to court to prevent them from publishing any material on ASIS that had not been vetted by the government. Toohey and Pinwill’s final manuscript was negotiated with officials from ASIS and the Department of Foreign Affairs and Trade. It reported that, while the November 1970 CIA proposal for ASIS to become involved in Chile was accepted by the Secretary of the Department of Foreign Affairs, ASIS itself “noted there was no vital Australian political or economic interests in Chile at that time.”

In recent years, Special Broadcasting Service (SBS) journalist Florencia Melgar broke the international story that notorious Pinochet secret police agent and alleged torturer Adriana Rivas (at the time on the run from Chilean authorities) was living in Sydney. For the story, Melgar said she submitted a formal request to the Australian government to investigate ASIS activities in Chile, but her request was turned down, and she was “warned” that she “risked legal prosecution” if some of the material she obtained  through Chile’s Foreign Affairs official records went to print.

Thus what Fernandes and his legal team achieved is no small feat. Australia, as an article in the New York Times accurately noted recently, may be the world’s most secretive democracy.

The Contents of the ASIS Station Reports

Although this was the first time reports officially recognized that the Australian government had an ASIS station in Santiago, Chile from 1971 to July 1973, the information published at the NSA is mainly technical. According to the NSA itself, the “documents turned over to Fernandes contain few revelations of actual covert operations, intelligence gathering or liaison relations with the CIA in Chile; those sections of the records are completely censored.”

Most of the communications relate to the difficulties that Australians faced carrying out their tasks in Chile. Reports include comments on everyday events like communication delays, station vehicle deliveries, agent lodgings, and observations like “[a] fluent knowledge of Spanish in SANTIAGO is a necessity.” According to Fernandes, another document notes the difficulty ASIS had in getting a safe while “there are several mentions about how beautiful Chilean women are.”

Despite these seemingly insignificant reports, an April 1973 memorandum states that if Australia’s role in Chile at the request of the CIA became public, Prime Minister Whitlam “would find himself in an extremely difficult political situation as, quite clearly, it would be impossible for him to present the MO9 [ASIS] presence in Santiago as being in the direct Australian national interest.”

The importance of the April 1973 memorandum cannot be understated. Domestically, Whitlam came to power with the support of a large movement against the war in Vietnam. Once in office, his was the most progressive administration Canberra had seen in decades, promoting a wide range of social policies. If Australia’s activities in Chile had been discovered during Whitlam’s term in office, a section of his own Labor base could have become hostile.

By July 1973, the ASIS station was allegedly disbanded, although NSA documents indicate that  “one ASIS agent reportedly stayed in Santiago until after the September 11, 1973, military coup.”

During the time that this final Australian ASIS agent was allegedly in Chile, leftists were being violently tortured and executed by the Chilean military. Peter Kornbluh, Director of Cuba and Chile Documentation Projects at the NSA would not speculate on that agent’s activities.

“That information” said Kornbluh “is contained in still-classified documents that the Australian government should release for the verdict of history.”

Australia and the Pinochet Connection Today

In November, former Pinochet secret police agent Rivas will return to the Federal Court in Sydney to continue fighting her extradition. She is wanted by the judicial system in Chile for the alleged kidnapping and disappearance of seven members of the Chilean Communist Party. Rivas, a former member of the Dirección de Inteligencia Nacional (Directorate of National Intelligence, DINA) and personal secretary to Manuel Contreras, the head of Chilean intelligence (1973-1977), has already lost two appeals. The eventual conclusion of her case could set a precedent.

According to Chilean-Australian journalist Juan Miranda, there is “real proof that other members of Pinochet’s secret service” could be “living in Australia.” Miranda claims these possible members of the regime are being investigated, and at some point their presence will be raised with authorities in Australia.

Diego Andrés Peñaloza Pinto is a 28-year-old law graduate from the University of West Sydney whose family emigrated to Australia from Chile in order to escape political persecution. Several of his family members were disappeared or killed by the Chilean secret police.

“It is concerning and disappointing to know that the Australian taxpayer was duped into funding Australia's involvement in the toppling of a democratically elected government,” said Peñaloza after ASIS’ activities in Chile were confirmed.

Peñaloza’s mother, Sandra del Carmen Pinto, added that it saddens her “that the country that gave me so much helped people that took so much from me.”

Together with 70 Chilean-Australians, Pinto has added her name to an open letter sent to Australia's Minister for Foreign Affairs and Trade (DFAT) demanding that the Australian government apologise for its participation in the overthrow of the Allende government. The open letter also requests that “the government of Australia declassify all necessary files regarding ASIS activities in Chile in the 1970s.”

Although his work led to the Australian government admitting ASIS role in the overthrow of Allende, Fernandes has few hopes that he will ever see the full declassification of Canberra’s reports on Chile or countries like East Timor and Cambodia. If those reports were published, Fernandes is sure that they would show Australia’s intelligence agencies' “total immersion in the CIA’s activities.”

The Australian government signed the new strategic defence alliance AUKUS with the U.K. and United States last month to build a series of nuclear-powered submarines and deepen cyber and artificial intelligence cooperation. In light of a recent series of Australian journalists and whistle blowers being threatened with legal actions or even arrested for their attempts to expose abuses by the Australian government, Fernandes’ comments should come as no surprise. Australia’s secretive nature, and who its key international allies are, has largely remained unchanged since September 11, 1973 when president Allende was violently removed from office in Chile.

Rodrigo Acuña is an independent journalist on Latin American politics and host of Alborada’s Indestructible Podcast. He holds a PhD from Macquarie University. You can follow him on Twitter at @rodrigoac7.