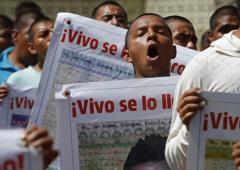 "The government, after they disappeared the 43, they tried to say it was an isolated case, and we screamed ‘no!’ It isn’t an isolated case, it is systematic. It happens many times a day in different parts of the country."

A Dispatch From the Neocolony
February 24, 2011
Dawn Paley
What's next for the U.S.-Colombia Free Trade Agreement?
December 3, 2010
Dawn Paley

The U.S. Colombia Free Trade Agreement has slid off the radar, but the deal is far from dead. It has been more than three years since the Colombian congress approved the deal, but it is still awaiting congressional approval in the United States. The agreement was a political hot potato for President Obama and congressional Democrats, who decided to put the agreement on the back burner in 2008. This year's mid-term elections have shifted the balance of power in the House, but it isn't clear whether or not there will be a push to ratify the controversial agreement.

A set of policies adopted in January 2010 during the de facto presidency of Roberto Micheletti are now the basis of the goals for USAID's latest round of "democracy promotion" funding in Honduras. This will continue the long history of U.S. funding of the Honduran elite, the very players allegedly behind the June 2009 military coup that ousted former president Manuel Zelaya. What is cloaked as funding for democracy is likely to help these elites further consolidate their power, and serve as an impetus to push through neoliberal economic reforms that were stalled under Zelaya.

Following the hype of being deemed as one of the world's "fastest growing and most important energy development stories," Colombia put 168 oil and gas concession blocks on auction in June to foreign and national exploration and production companies. The Canadian energy corporations that led the charge to gobble up these concessions now stand to have preferential treatment in Colombia. The Canada-Colombia Free Trade Agreement, signed into law in Canada in June, now only awaits Colombia finalization to go into effect.

The Honduran Business Elite One Year After the Coup
June 23, 2010
Dawn Paley

The first anniversary of the June 28, 2009 military coup in Honduras might just slide under the international radar, timed as it is right after the Honduran national team kicks off at the World Cup. The Honduran business community could hardly have planned it better themselves. After all, Honduras's most powerful families who make up the local machinery of the neoliberal economic model thought to be at the center of the country's post-coup struggle, are also the ones accused of being the "visible face" behind the ouster of former President José Manuel Zelaya.