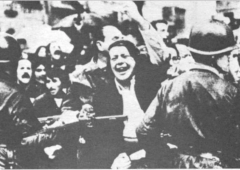 By 1979, much of the southern cone had fallen to right-wing military dictatorships in an era defined by militarist anti-communism, the defeat of the working class movement, and the emergence of neoliberalism. From our 50th anniversary issue, available open access for a limited time. 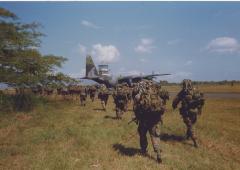 How the Iraq War Began in Panama
December 24, 2014
Greg Grandin

As Congress remains averse to compromise amidst fiscal cliffs and budget sequestration, we thought it is worth looking back at the 2012 election to see what the future holds for the Republican party.

In a bold move, the democratically elected president of Honduras Manuel Zelaya—ousted in a military coup in June—has returned to Tegucigalpa, entering the country in secret, traveling overland with a small group of advisers. He is currently in the Brazilian embassy, and crowds of supporters are gathering around the building to demand the restoration of Honduran democracy.

Barack Obama this week continues his administration's efforts to push the "reset" button on U.S. foreign relations attending the Summit of the Americas in Trinidad and Tobago. What if he had picked the Nation's Katrina vanden Heuvel or Democracy Now! anchor Amy Goodman to advise him at the upcoming Summit? Unlikely, to say the least, but 75 years ago President Franklin Delano Roosevelt did something just like that. As a result anti-imperialism saved the American empire.

Beyond the Four Freedoms: Obama and Sovereignty
February 26, 2009
Greg Grandin

To get a sense of what Barack Obama’s foreign policy will be, we should watch Latin America. The region has long lived like the proverbial canary in a coal mine, a reliable indicator of what’s in store for the rest of the world when circumstances prompt Washington to shift diplomatic direction. There’s been much talk lately about Franklin Delano Roosevelt and the New Deal, some of it generated by Obama himself, who has cited FDR’s Four Freedoms—of speech and religion and from want and fear—to signal what his diplomatic priorities will be.