Is the Mexican President Protecting the Army?

The arrest of the former attorney general for covering up the state’s role in the disappearance of 43 Ayotzinapa students could be a smokescreen. 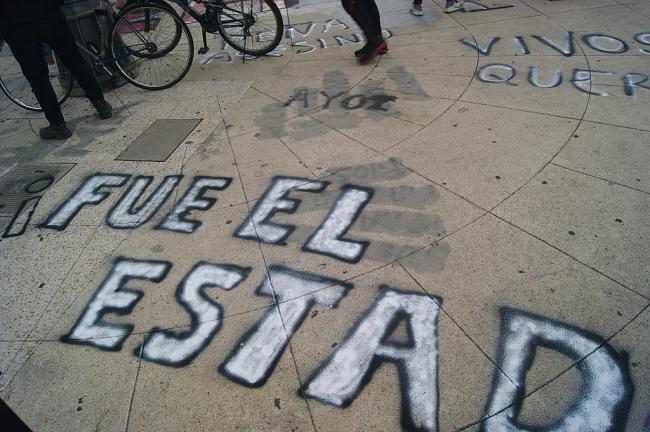 This piece was originally published in Spanish by The Washington Post.

President Andrés Manuel López Obrador has largely staked his government’s legitimacy on investigating, solving, and prosecuting the Ayotzinapa case. So far, this is the only state crime and case of forced disappearance—of the more than 105,000 that exist in Mexico—that López Obrador has explicitly committed to resolving and that has a truth commission and a special prosecutor.

On September 26-27, 2014, the students of Ayotzinapa came under attack in the city of Iguala. We now know that the perpetrators of the attacks included Guerrero state police, federal police, soldiers, members of the criminal syndicate Guerreros Unidos, and municipal police from Iguala, Cocula, and Huitzuco. The attackers killed six people, wounded scores, and forcibly disappeared 43 students.

After the attacks, the government of Enrique Peña Nieto did everything in its power—lie, torture, destroy evidence, plant evidence, alter crime scenes, plant false evidence, use Pegasus spyware to target human rights lawyers and journalists—to make it impossible to find the 43 disappeared students, document the attacks and forced disappearances, or ever know the full truth about what happened that night. The administration also forced the families to imagine a horrifying story—their children being incinerated in an open-air trash dump—that never happened.

Why would they have made such efforts, with such cruelty, to cover-up state participation in the attacks, murders, and forced disappearances? The main working hypothesis of the case is that the students unknowingly commandeered a passenger bus fitted with a hidden shipment of heroin or cash.

Recent statements and events carried out by the López Obrador government appear to absolve military institutions while pursuing high-level federal officials from the previous government. This raises fears that once again the Mexican authorities are seeking to benefit politically, even if in a very different context, from the mass atrocity committed in Iguala. After almost eight years, the events remain unresolved for the 43 families looking for their sons—and for the truth.

On September 26, 2018, speaking as president-elect at a commemorative event in Mexico City with the families of the 43 disappeared students, López Obrador said: “During my campaign I made the commitment to help clarify everything that happened in the unfortunate case of the disappearance of the young men of Ayotzinapa, and we will fulfill our promise.” In January 2019, he created a Commission for the Truth and Access to Justice in the Ayotzinapa Case within the Secretaría de Gobernación and named Alejandro Encinas as sub-secretary of human rights, population, and migration to lead the commission.

At that same anniversary event in 2018 and later at the January 2019 inauguration of the commission, Encinas said: “We begin from the premise that the truth is that there is no truth concerning the forced disappearance of the students from the Ayotzinapa Teachers College and the homicides and aggressions committed on September 26, 2014 in Iguala. To find the truth is our task and we will carry it out.”

Encinas repeated this statement—“the only truth is that there is no truth”—again on August 18, 2022, when the Presidential Truth Commission presented its first report. Beyond being false, the logic of Encinas’s statement ignores and delegitimizes all the struggles and investigative work of the survivors of the attacks, the families of the disappeared, and independent journalists and investigators. For truth to exist, Encinas has insisted, it must be produced by the state.

At the August 18, 2022 press conference Encinas purported thus to be finally presenting the truth. “This is the first time the state has solved a crime of the state,” he said.

And yet the evidence described in the Truth Commission’s report contradicts Encinas's statement: it details military participation in torture, the army’s refusal to search for the students and an undercover soldier disappeared that night, and what appears to be cellphone communications between a soldier and a member of an organized crime group.

On August 19, federal police arrested the former attorney general, Jesús Murillo Karam, the man ostensibly in charge of and who came to represent the cover-up operation. Murillo Karam is being charged with obstruction of justice, torture, and forced disappearance. That same day, federal prosecutors issued arrest warrants for 20 soldiers and 44 police officers.

During a second presentation of the report, on August 26, Encinas said: “We have evidence that presumably six of the students of the 43 disappeared were held for several days alive in an old warehouse and from there they were handed over to the colonel.” The colonel was “presumably” the now retired general José Rodríguez Pérez, who gave the order to kill and disappear the bodies of the six students four days after the night of the attack.

This is a stunning revelation and fell like a bomb in Mexico. Encinas did not, however, describe the evidence or how it was obtained.

The argument of military complicity is even stronger when taking into consideration the exhaustive evidence described in the three independent expert reports on the case. This evidence includes the recently documented military surveillance of the students before and during September 26-27, videos of torture sessions at Marine installations, and Marine drone footage showing what appears to be the government alteration of the Cocula trash dump; the Marines, Federal Police, and other federal agents (including Murillo Karam) arrived at the dump, set fires, distributed and spread objects around, and finally lowered a helicopter into the dump such that all the objects and debris were blown into the air and resettled when the helicopter lifted back up. And they did this all before the federal agents first officially arrived to secure and analyze the area.

López Obrador, a self-proclaimed anti-neoliberal leftist, has built a closer relationship and granted more power to the military than even his bellicose predecessors. He has given the military more legal faculties to carry out domestic public security functions and has given them both construction and administrative control over his major infrastructure projects: the new Mexico City International Airport and the controversial Mayan Train in the Yucatán Peninsula.

López Obrador opposed the Los Angeles arrest on drug trafficking charges of former secretary of defense General Salvador Cienfuegos in October of 2020. While acting as chief of the armed forces, Cienfuegos refused to allow independent investigators to enter military bases or speak with the soldiers on duty in Iguala on the night of the disappearances. In an unprecedented about-face, the United States released Cienfuegos back to Mexico. López Obrador promptly sent him home and later absolved him. 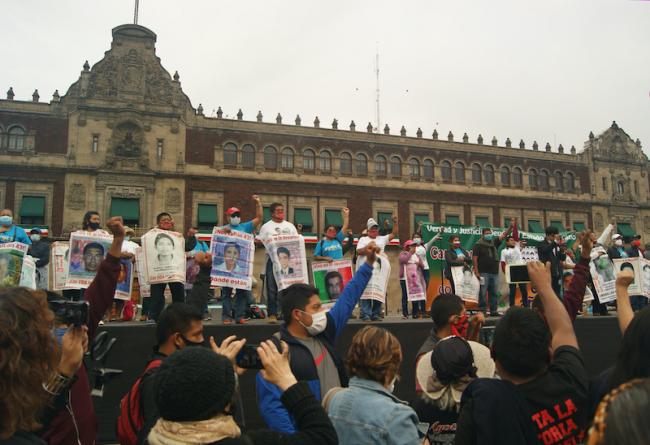 A “Commitment to the Truth”?

The new 97-page Truth Commission report proclaims to address the “right to truth” and “absolute transparency and full access to information.” It is strange, then, that nearly 38 pages are completely redacted. Most of those pages contain cell phone screen captures with the numbers, identities, and content of the messages all inked out.

The government alleges that these communications identify the responsibility and the chain of command of those who made the decisions to attack and then disappear the students. The authorities do not describe the source of the cellphones, how they were obtained, or how the information was extracted from them.

A few days after the press conference, the Interdisciplinary Group of Independent Experts, or GIEI, released a statement saying that they had no knowledge of the report before the private August 18 presentation to the families, López Obrador, and other high state officials. The GIEI also said that they had not seen the evidence obtained from the screen captures, the cell phones from which they were obtained, nor the documentation of the forensic exams carried out to retrieve the information.

If the government proclaims its “commitment to the truth,” why would the Presidential Truth Commission publish a redacted report purporting to contain cellphone screen captures identifying the intellectual authors of the mass forced disappearance before sharing that evidence with the GIEI or with the special federal prosecutor for the case, and only hours after describing the evidence to the families and their lawyers?

It is striking that the special prosecutor for the Ayotzinapa case, Omar Gómez Trejo, has not been at the Commission’s presentations or Murillo Karam’s hearings, as he is in Israel. Did the government purposely plan to carry out these actions when he was out of the country?

López Obrador’s opposition is now crying foul, alleging that Murillo Karam’s arrest is merely political persecution of the much-disgraced PRI. But the evidence suggests that Murillo Karam did oversee and defend systematic torture and lies.

However, the question remains as to whether the Truth Commission is seeking to cover up for the military high command with the highly publicized arrest of the former prosecutor.

John Gibler is the author of four nonfiction books about politics in Mexico including I Couldn’t Even Imagine that They Would Kill Us: An Oral History of the Attacks Against the Students of Ayotzinapa.