Mexico’s Military Knew Ayotzinapa 43 Were Kidnapped, Then Covered It Up

Following a new report, families of the 43 students criticized the government of President Andrés Manuel López Obrador for failing to follow through on promises to finally solve the case. 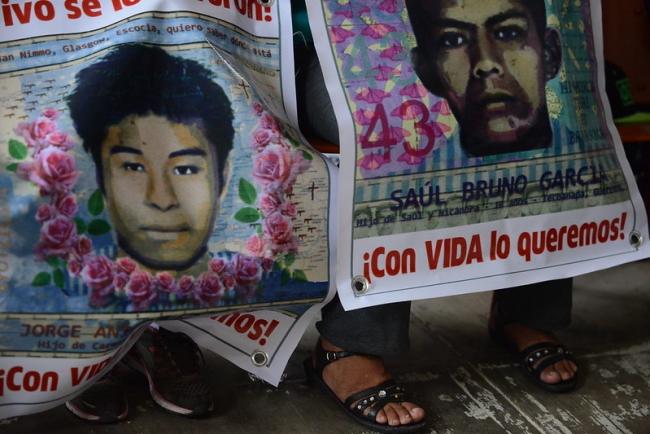 This article was originally published in Spanish by Avispa Midia.

“As the 43 families, we’re angry, really angry, because unfortunately [this government] looked us in the face for three years,” said Mario González, father of César Manuel González Hernández, one of the 43 students disappeared from the Ayotzinapa Rural Teacher’s College in Iguala, Guerrero in 2014.

The response from the families of the disappeared students came after the Interdisciplinary Group of Independent Experts (GIEI) charged with investigating the case released its third report on March 28. The report confirms that the Mexican military participated in the students’ disappearance and that authorities worked to distort the facts in presenting the “historical truth.”

That’s what the government of former president Enrique Peña Nieto called its official version of events, in which it argued that the students were detained by police in Iguala, handed over to members of an organized crime group, and then killed and incinerated in a trash dump in Cocula.

The GIEI’s investigations have cast doubt on the narrative since 2015. The independent experts got involved in the case after complaints of irregularities in the official version of events.

The group’s most recent report also includes a video that shows marines entered, interfered with, and manipulated the Cocula trash dump to construct the “historical truth.”

The GIEI also reported that the military designed a counterinsurgency strategy with which it infiltrated the Ayotzinapa teacher’s college to spy on students’ activities. The military was surveilling the students in real time as they were attacked by police and criminals in Iguala in the night between September 26 and 27, 2014.

After the latest revelations, the parents of the disappeared students called for investigations into both the Mexican military and former president Peña Nieto to clarify their participation in the case.

In a press conference on March 29, the mothers and fathers of the disappeared students also demanded a meeting with President Andrés Manuel López Obrador, with whom they say they have not been in contact since September 2021.

María Elena Guerrero, mother of one of the 43, Giovanni Galíndez, said the families didn’t think that after three years with a government that describes itself as the “Fourth Transformation,” there would still be no information about the students’ whereabouts.

For her part, Cristina Bautista, mother of the disappeared student Benjamín Ascencio, stressed that the GIEI report should prompt an investigation into the military “because that is where there are obstacles and we cannot find the truth.”

Emiliano Navarrete, father of the student José Ángel Navarrete González, said that in Mexico, the poor don’t get justice, and that the investigation into the disappearance of the 43 students is proof of that fact. He noted that, since the previous government was in power, there has been sufficient reason to suspect the military’s involvement in the crime.

“[The president] should focus a little less on the mañaneras and a little more on the commitments he has with the people,” Navarrete said, referring to López Obrador’s daily press briefings, which sometimes last as long as three hours. “It is upsetting to see that federal government institutions keep withholding information. If they hid this from us, what else have they hidden? He who lies once lies twice and three times. And the government only uses power for itself, and it does not give justice to the people.”

For Mario González, actions like the creation of the Truth and Justice Commission for the Ayotizinapa case, created when López Obrador came to power, show that state institutions have been toying with the families for the past three years. Just two days after López Obrador took office at the end of 2018, federal authorities committed to releasing all information related to the case “knowing we wouldn’t find anything,” said González.

In the press conference, Vidulfo Rosales, legal representative of the families of the disappeared students, stated that one thing is clear from the latest GIEI report: the manipulation of the Cocula trash dump reveals that there was an effort to befoul the investigation and cover up the truth.

According to Rosales, this effort complicated the exploration of other lines of investigation over the course of at least five years. At the same time, he argued that there is no difference between the previous and current federal government with respect to the Ayotzinapa case because, in the more than three years since the creation of the Truth and Justice Commission, the heads of the Navy and National Defense have refused to collaborate with the investigations.

“It’s one thing to deliver [information] to the GIEI and another to take concrete steps toward establishing responsibility,” Rosales said. Despite the publication of the expert report, the evidence it reveals has not concretely entered into the investigation, so the prosecutor’s office will have challenges leveraging the GIEI’s report into legal channels.

According to the GIEI, the military also conducted investigations that have not been shared to help shed light on the facts. The experts warned that relevant information remains in the hands of the military and security forces that “has been omitted in the documents delivered to both the GIEI and the special prosecutor, as well as in the declarations of military officials, including: information about a military patrol at the Palace of Justice in Iguala; omission of reports from toll booth three on the highway, where soldiers were deployed; and that the students [were detained in the Palace of Justice] that night.”