Customs and Border Protection can transport the intense U.S.-Mexico border surveillance and security apparatus to anywhere in the country, including the Super Bowl. As with the border, this comes accompanied with an ever-tightening and strict enforcement web, that reverberates well past the actual boundary into the surrounding area.
Tweet
Todd Miller
Border Wars
2/15/2012

A small plane breaks across the border into restricted airspace. The Customs and Border Protection (CBP) officers are ready. They go after it in their Blackhawk helicopter and get close enough to the plane to see the type of aircraft and the tail identification number.

“November 1-6-0 Delta Bravo this is U.S. Customs and Border Protection H60, you have entered a restricted area. Turn left,” radios an officer to the aircraft.

The pilot doesn’t respond and continues straight ahead. CBP pilot Jason Harrell pulls close enough so the people in the targeted aircraft can see the two heavily armed agents in the back, each with an automatic firearm in his hands, a dark flak jacket and helmet, and a beige uniform.

Harrell asks one of the men if they could pull off a “disabling” shot. 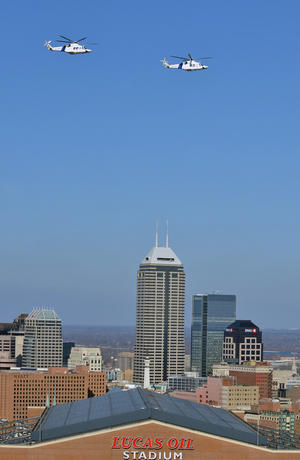 The intimidation tactic works. The N 1-6-0 pilot gets the message and turns hard left, out of the restricted zone.

This was not CBP’s valiant defense of the U.S.-Mexico border. This above case was a mock training scenario filmed by the National Geographic Channel’s Border Wars, six days before the kickoff of the 2010 Super Bowl between the Indianapolis Colts and New Orleans Saints. The whole scene was fast-paced and dramatic, accompanied by music meant for Hollywood’s best thrillers.

While this CBP operation was done as part of a larger coordinated effort to protect the nation’s largest sporting and commercial event, it also drives home the idea that officials can place the metaphorical international border at any given place in the country, at any given time. As with the U.S.-Mexico border, this comes accompanied with an ever-tightening and strict enforcement web, that reverberates past the actual boundary into the surrounding area, in this case southern Florida. CBP has played a role in securing the Super Bowl for more than 10 years, including places that are far from any international boundary, such as Indianapolis for the 2011 NFL showdown on February 5.

In this depiction of CBP Super Bowl activities in 2010, via the National Geographic Channel, agents scour the Miami coastline and waterways in search of potential threats. They come across a “suspicious tanker” anchored on the Miami River near downtown, which will be going to Haiti. First, the camera pans onto several stacks of piled-up mattresses on the boat. The shoddy conditions of the mattresses and other badly-worn furniture, the narrator explains, makes the boat a “red flag.” The camera focuses on the crew, two Haitian men with their black faces blurred. The captain of the boat says that they are transporting merchandise to be sold, but according to CBP agent Juan Allende “the money does not add up” given the conditions of the merchandise, and the costs of operating the boat. The feeling of the scene is one of likely criminal activity, and that CBP will inevitably find something as they rifle through the boat. 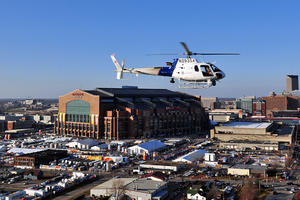 CBP agent Carla Rolon descends into the sludge in the bottom of the vessel in the ballast tanks, which are filled with “rancid liquid” potentially composed of “urine” or “feces,” in search of secret compartments. “Plain nasty,”  Rolon explains to the camera.

Even though they don’t find anything, “every precaution was necessary,” the narrator explains, “with the Super Bowl two days away.”

This is all part of the CBP's mission: “Our mission statement says we’ll defend the American pubic against acts of terrorism," one unnamed CBP agent says, "The Super Bowl is a high priority 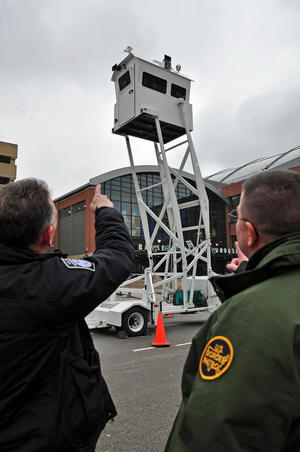 However, the narrator warns that with all the agencies tied up with the Super Bowl, “cartels and human smugglers” might take advantage of unprotected areas “to get their contraband into Miami.” So, U.S. Border Patrol agents head first to the train and bus stations to search passengers, which featured agent Lazaro Guzman calls an “all threats environment.” With all the surveillance in airports, he says that “they tend to use the Amtrak or the Greyhound as a tool,” without specifying who “they” are. While this is presented as unique to the Super Bowl and its enforcement web, Border Patrol agents questioning passengers in bus and train stations is a common practice throughout the country.

Guzman says that their mission is simple and they are looking for “what document . . . they have to remain and stay in the United States legally. That’s it.”

The train is “clean” but on the Greyhound bus they arrest a Jamaican man and a Nicaraguan woman, neither who have documentation to be in the country. The camera shows the Border Patrol putting the handcuffed migrants into one of their vehicles. They also detain another man who doesn’t have “a clear explanation” about why he is on the bus, or where he is going. This is a big deal, they stress, being so close to Miami and the Super Bowl. The feel is that there is a thin line between the undocumented migrant and potential threat to the sporting event.

“Let’s talk football and security, it’s got the makings of a spy movie,” ABC newscaster Terry Moran explains on February 3 about the February 5 Super Bowl in Indianapolis where CBP play a similar role, “Undercover officers, giant X-ray machines, bomb squad robots, and emergency response aircraft—all of an incredibly elaborate security apparatus designed to protect a colossal event.” As always, CBP works in coordination with other agencies and local law enforcement. They fly helicopters in circles around Lucas Oil Field, securizing the air space as the New England Patriots and New York Giants play a close game. 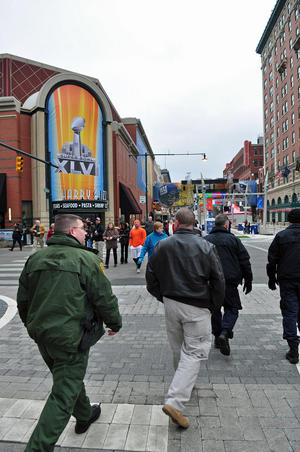 CBP and Immigration and Customs Enforcement also run Operation Fake Sweep in the days leading up to the Super Bowl to capture $4.8 million dollars in fake NFL merchandise and 307 websites. On February 1, Department of Homeland Security (DHS) Secretary Janet Napolitano announces a partnership with the NFL as part of its “If you see something, say something” campaign. DHS also says in this “unprecedented” Super Bowl security effort that they have trained more than 8,000 stadium staff and volunteers in “anti-terrorism and security awareness.”

Perhaps the 2010 security operation, as depicted by Border Wars, prevented some sort of attack on the Super Bowl crowd, but by the end of the television show the operation had only netted three undocumented migrants from a Greyhound bus which wasn’t even in Miami. The Super Bowl is a big example of how easy it is to move the increasingly-intense U.S.-Mexico border surveillance and security apparatus to any place in the country, for whatever reason—Super Bowl or otherwise. And this security apparatus, while protecting some, always disproportionately impacts and criminalizes the same individuals: people of color and poor, often unauthorized migrants.