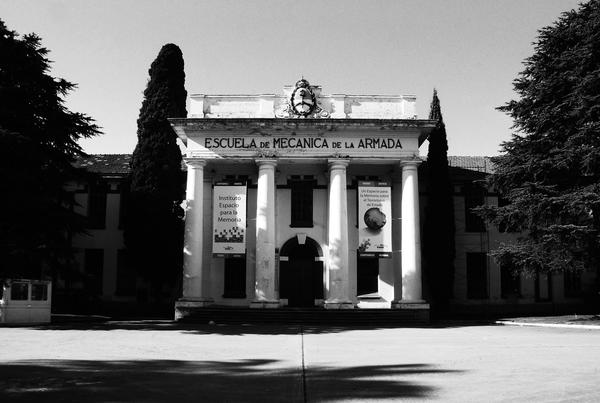 Three stone pillars with the words “Memory” “Justice” and “Truth” tower over the front lawn of the Space for Memory Institute in Buenos Aires, which celebrated its 10th anniversary this Monday, March 24. The center, also known as ex-ESMA (the ex-School of Mechanics of the Armed Forces), was formerly a naval academy that served as one of 500 clandestine detention centers during the military dictatorship of 1976-83. A decade ago President Néstor Kirchner shut down the academy to be repurposed as a memorial site for the desaparecidos, and declared March 24—which was the day of the coup d’état in 1976—as the national Day of Memory for Truth and Justice.

Helping coordinate Monday’s events was Camilo Juárez, founding member of Sons and Daughters for Identity and Justice Against Oblivion and Silence (HIJOS), an organization dedicated to vindicating victims of the military dictatorship. Both of Juárez’s parents were disappeared by the dictatorship, and last July he presented his testimony in court. I sat down with Camilo last Friday, March 21st at the ex-ESMA to ask him about HIJOS and his perspective on the commemorations of the 1976 coup. Despite the dark history he lived through, Juárez spoke optimistically about the future of Argentina as a new model for human rights.

Veronica Carchedi: What does HIJOS do to honor the Day of Memory?

Camilo Juárez: During all these years, except for this past decade, this date has always been filled with pain and sadness. Nevertheless, we always mobilized on this date with much pride, reaffirming our obligation to the past. Since the government of Néstor Carlos Kirchner made it a national holiday 10 years ago, contrary to what we expected, the mobilizations have become more massive each year. With HIJOS, we spend the entire month hosting talks in high schools, universities, prisons, libraries, local neighborhoods, and clubs, sharing the significance of this date for those of us who suffered the loss of a family member or loved one. We see it as our job to communicate knowledge of what happened, and we are left exhausted but gratified.

VC: Since its foundation in 1995, what are the major accomplishments of HIJOS and what work still remains?

CJ: Our initial goal was to annul the laws that the Congress voted in, such as the Full Stop and Due Obedience Laws, and the pardons by President Carlos Menem, which are entirely unconstitutional and prevented us from moving forward with the military crimes trials. We protested in many different forms, through escraches (a term coined by HIJOS that refers to direct action tactics to hold war criminals accountable), mobilizations, conventions, documents, and demonstrations. Finally the government of Kirchner repealed these laws, reopening all the cases, which we were not prepared for. We gathered a lot of evidence and many testimonies. But this process requires us to form new teams of lawyers that understand these topics and to support witnesses and victims in giving their testimony. We also cross-reference the testimonies to see what conclusive facts can lead us to new repressors. The majority of the repressors used nicknames and the majority of the detainees were blindfolded, so finding them requires extensive investigation.

In this sense we have contributed a lot, thanks to the testimonies of the victims, by creating a database of this information. There are many cases that still haven’t started. The trials have all been in common courts; they did not make special courts to judge these cases. The same judge who presided over a car robbery or an attack on a kiosk is trying these crimes. So they are not specially prepared, which guarantees that these trials are judged under ordinary justice. It guarantees a certain transparency. So it is calculated that the trials will last at least 10 more years. Our task today is to attend these trials and find the rest of the 400 children appropriated during the dictatorship.

VC: How does a country recover from an experience like this? 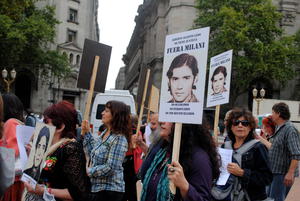 CJ: After going through such a dark and violent period, the question is how to understand what happened so it does not repeat itself. The most logical demand was that of the Mothers of the Plaza de Mayo: To stop the violence and seek justice through the judicial system. I think after so many years, Argentine society did not want to go through more violence. Other peace and justice processes, like ones in Colombia and Africa, have covered the past with a blanket of forgetfulness—an amnesty or another agreement. We think that way of going about things does not bring truth to the peace process. There were many aspects that allowed the coup d’état to happen and the de facto government to take over. One of those was that it had support from large, powerful economic corporations. It is important for us as an advancing society to also judge civil complicity, and those who benefitted economically from the regime. These groups deserve repudiation from all of society, and even prison sentences for crimes committed, because some of these groups were not just complicit, but participated fully.

VC: Why have these cases not been brought to light? What is the role of the media in this?

CJ: Back then, media outlets were only papers, but today that’s changed—huge corporations with a lot of power and money now own news channels, online newspapers, and several other mediums. During the dictatorship they published nothing against it­­—if anything, they applauded it. When democracy returned these mediums played dumb, and said ‘Oh look at the bad things the military did.’

These cases have captured international attention; people from all over the world come here to watch them—they are just as important as the trials in Nuremberg. But when a group of repressors is sentenced to life in jail, these same newspapers will print it in a tiny block on page 46, when it should be on the cover. This shows that they know that the public has begun to open their eyes and knows who did what and who became rich off of whom in this country. That is why it is so important that there be a law to impede media monopolies, and to allow different kinds of outlets to exist—so that the university has its own news station, the neighborhood club or workers’ cooperative each has its own space in a radio channel, or website. The voice that invades all the mediums, all the radios, can be opposed by many alternative voices that tell the truth.

Some examples of alternative media are radio stations like FM La Tribu, which for 20 years has played a small but important role. There is a journal called Página Doce, which has attained prestige for its defense and commitment to human rights. There are also some journalists who are within large companies that publish personal blogs, such as Diego Martínez.

VC: Regarding the Instituto Espacio de la Memoria, or the ex-ESMA, how are decisions made over what to renovate and what to preserve? Are there divisions over this decision-making process?

CJ: Yes, there are. On one side there is a group of ex-detainees who were here and survived and sought to make this a solemn space—a type of sanctuary, a place of pain like a cemetery or mausoleum. But the rest of us think that it is important not to remember through pain but to remember [the disappeared] as they were, which was full of life. This is not to trivialize or play down pain. But we chose to remember them with happiness, in itself as a form of resistance to what [the dictatorship] wanted us to feel. It wanted to defeat us, to drown us in sorrow and grief. We don’t deny those feelings, but we want to follow our parents’ example with joy.

VC: Over the past decade, in which the Day of Memory has been honored, how has the landscape of social and economic rights changed in Argentina?

CJ: In the last 10 years minority rights have advanced, such as the passage of the same-sex marriage law. They have also advanced through the Gender Identity Law. If a man who was born a man identifies as a woman and requests a name change on official documents, the state must recognize this by law. And the state must also pay for sex change operations. It is a groundbreaking law for the world.

Another important change is the Universal Child Allowance. Every child that is born, if his or her parents do not have work or minimum wage, is given an allowance, provided they send their kids to school. It is included so that each child is better prepared than their parents and is not subjected to the same marginalization that makes it impossible for them to study or receive training. It gives children health care and requires them to be vaccinated. They must be students—they can’t be in the streets begging. So this is very positive. Only through education can one escape poverty. These are all measures that one looks at with excitement, because they serve to change the story of this country.

Interview and translation by Veronica Carchedi, a Latin American Studies and Journalism double major in her second year at NYU. She has worked with several NYU publications including the school newspaper, Washington Square News, and the Spanish and Portuguese Department literary journal Esferas.