Argentine president Cristina Fernández de Kirchner is poised to cruise to victory in the country’s presidential elections this Sunday. Although Fernández may now be riding a wave of success, she’s come a long way from the problematic first few years of her administration. 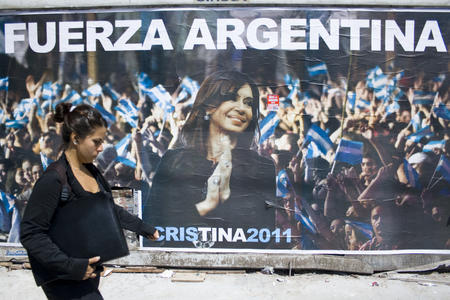 "Argentine Strength, Cristina 2011" (Credit: Ed Stocker)Argentine president Cristina Fernández de Kirchner is poised to cruise to victory in the country’s presidential elections this Sunday. She won over 50% of the vote in the August primaries, and the opposition has been unable to mount a significant leadership challenge capable of throwing her off course. Last week, in the final survey permitted by local election law, the polling company Aresco suggested that she would win 52% of the vote and easily avoid a second-round runoff.

Although Fernández may now be riding a wave of success, she’s come a long way from the problematic first few years of her administration.

In March 2008, only four months into her presidency, Fernández introduced Resolution 125. Furiously promoted by her husband, former president Néstor Kirchner, the legislation aimed to increase taxes on export commodities as a way of funding state coffers and stimulating the internal market. It launched an outcry, however, from powerful farmers who responded by paralyzing the country with marches and strikes in what became labeled “the crisis in the countryside.” The legislation was finally abandoned in July 2008. At the same time, the country’s biggest media conglomerate, the traditionally pro-government Grupo Clarín, turned its back on the president and her husband. In June 2009, Fernández’s coalition, Front for Victory, lost its absolute majority in both houses of Congress. By September 2009, her approval rating was down to 23%, according to the Mexican polling firm Mitofsky, making her one of Latin America’s most disliked leaders. On October 27, 2010, her husband, former president Néstor Kirchner died from a fatal heart attack. Things couldn’t get much worse.

Kirchner had often been accused of pulling the strings of Fernández’s government. It was he, after all, who stood aside as president in 2008 and proposed her as a candidate. For many, it was viewed as a cynical move to circumvent the country’s two-term presidential limit and control the domestic political landscape for years to come.

Fernández responded to Néstor Kirchner’s death, however, by showing the electorate that she could do it on her own. Kirchner’s passing also exposed a very personal, fragile, and even vulnerable side to la Presidenta that seems to be winning her votes.

“I think she has been very smart since [his death],” says Thomsen. “She has changed the tone of her appearance—much less the angry woman scolding people and criticizing everybody; she lets others do the dirty job. Instead she smiles and weeps.”

The economy has also played a huge factor in Fernández’s political recovery— although economists are split on whether Fernández benefited from good luck or if her hands-on expansionist policies also helped to stimulate the market. Regardless, Latin America has been enjoying a sustained period of economic growth in recent years and Argentina has benefited in particular, rising well above regional averages. This has been generated by two factors. The first is a resurgent internal market, a direct result of the 2001–2 crash, which devalued the Argentine Peso, stimulating domestic production; the second is favorable external factors, such as soy exports to feed China’s expanding middle class, and trade with neighboring Brazil (worth $33 billion in 2010).

In its recent World Economic Outlook, the IMF predicted that Argentina’s economy would expand by 8% this year, second in the world only to China. Despite IMF warnings of high inflation and unsustainable growth, this is a remarkable turnaround for a country that a decade ago defaulted on payments and devalued its currency. And if the economy is stable, the electorate is generally content, especially if consumers have more purchasing power.

“People have things that for a long time they didn’t have,” explains Héctor Valle, chief economist at the Buenos Aires-based Development Investigations Foundation. “People have possibilities, they have work. The poor have guaranteed salaries and can send their children to school. They can afford to feed them in their homes—these are important things.”

Fernández’s policies have also grown increasingly populist. The most unashamedly brazen of these vote-gaining moves came in 2009 when the government forked out the cash to show premier division soccer games on free-to-air television (a program known as “Soccer for Everyone”), as well as the recent Equality Connect program, promising a notebook computer for each public school student.

But the legislation that has perhaps changed the face of Argentina’s social landscape the most—obsessive soccer fans aside—is the Universal Child Allowance (Asignación Universal por Hijo), which was launched the same year. Widely viewed as a groundbreaking piece of welfare legislation, the fund allocates money for each child under 18 to families either struggling with unemployment or underemployment. Despite the lack of reliable statistics, the program has helped decrease poverty, and hand opportunities to some of Argentina’s most dispossessed communities.

How long can this good run last for both Fernández and the country’s economy? Some Argentine economists believe that as long as emerging markets need commodities—and Brazil doesn’t slump into a major recession—Argentina will maintain high growth and Fernández will continue to have an easy ride. For Mario Sotuyo from the Buenos Aires E&R financial consultancy, however, “The national government doesn’t have the genuine revenue to be able to sustain its level of spending.”

Opposition voices, too, sound a note of caution. “Society, despite the fact that many people criticize the government, prefers to support the status quo without considering that in a few years the situation will be more complicated,” says Miguel Bazze of the right-wing Union for Social Development party (UDESO).

Even if the economic waters turn choppy, it won’t affect Fernández until well after the October 23 elections. In the primaries in August, Fernández was 38 points ahead of her closest rivals, the conservative UDESO candidate, Ricardo Alfonsín, and the Peronist former president, Eduardo Duhalde. It’s hard to see how other candidates will have managed to close the gap in the two months since that initial vote. It’s worth remembering, too, that Fernández actually needs to achieve a smaller segment of the vote than the 50% she managed in the August primaries. According to Argentine electoral law, the presidential candidate needs 45% to win outright or 40% and an advantage of more than 10 points over her nearest challenger.

Fernández appears confident. While all the other presidential hopefuls have launched campaign websites, she hasn’t bothered. And when it comes to their marketing strategy, the incumbent is miles ahead with a slick, positive message. The others look lame in comparison: Peronist Alberto Rodríguez Sáa says he thinks offering free wi-fi nationwide will win him the election; Duhalde is running a negative campaign focused on economic woes, corruption, and Argentina’s “indignados.”; and Socialist Hermes Binner simply looks awkward at a rally on his TV spot.

Fernández’s adverts, meanwhile, show her smiling and addressing a cheering, flag-waving crowd. Her campaign slogan, “La fuerza de un país” (the strength of a country) is by far the most positive message out there, calling for a united Argentina. The force is with her—and she knows it.

Ed Stocker is a freelance writer and photographer based in Buenos Aires, specializing in Latin American current affairs. He has worked and written for a range of publications, including: The Sunday Times, The Daily Telegraph, The Independent, Newsweek, New Statesman, Monocle, and Christian Science Monitor. You can visit his website at edstocker.com. For more on Argentina’s economic policies see our recently published article “Argentina: Beyond the ‘High Dollar.’ "