A Vote for Local Democracy in Bolivia's Regional Elections 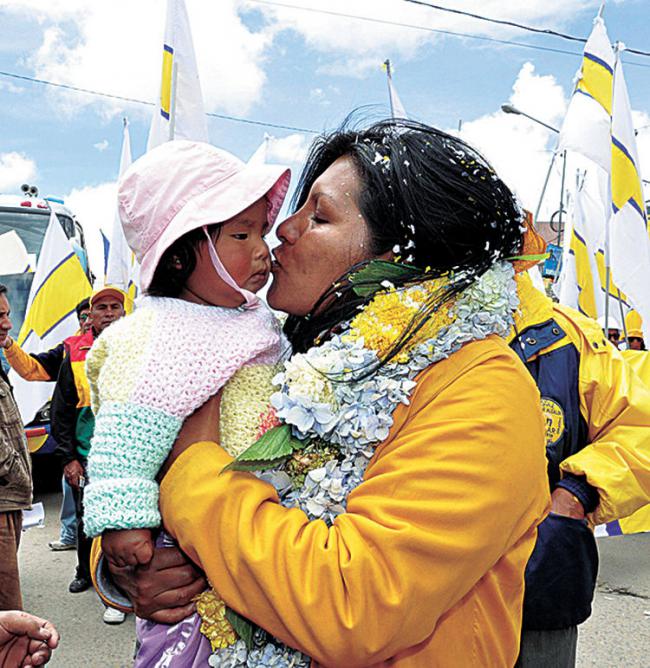 On March 29, Bolivians went to the polls to choose a new slate of departmental and municipal officials, in the country’s second “subnational” election since the new Constitution was adopted in 2009.

At the departmental level, Evo Morales’s ruling MAS (Movement Towards Socialism) party won 4 of 9 governorships outright, down from the 7 it currently holds. The MAS was tentatively awarded a 5th governorship in a still-contested legal ruling, and lost 2 races to opposition candidates, including its former stronghold of La Paz. Two other gubernatorial contests will go to a runoff in May.

Locally, the MAS retained control of the mayoralty in 2/3 of Bolivia’s 339 municipalities, but lost 8 of 10 races in the largest cities, which contain half of Bolivia’s population. These include La Paz, Santa Cruz, Cochabamba, and, most importantly, El Alto, a city of indigenous migrants that has been a traditional bastion of MAS support. In the last (2010) municipal contest,  MAS mayors were elected in 5 major cities, including El Alto.

These results, which are widely viewed as at least a partial setback for the MAS, come less than 6 months after Morales’s landslide re-election victory in October, when MAS delegates also won 2/3 of the seats in the Plurinational Legislative Assembly. What accounts for this sudden and seemingly paradoxical shift, and what does it portend for the future of the MAS party and for Morales?

For starters, some MAS candidates were clearly tarnished by corruption scandals. Edgar Patana, the incumbent MAS mayor of El Alto, was defeated after a leaked video showed him, as a regional labor leader, receiving a mysterious packet from a former mayor. Felipa Huanca, a national peasant leader and MAS candidate for governor of the La Paz department, was trounced by ex-MASista (and former Morales cabinet member) Félix Patzi, after she was implicated in a scandal involving the diversion of funds destined for indigenous community projects.

The anti-MAS vote can also be seen as a backlash against the party leadership for imposing unpopular candidates, and for using manipulative tactics in an effort to steer voters away from formidable challengers. For example, Patana was defeated almost 2 to 1 by Soledad Chapetón ("La Sole"), a dynamic young Aymará woman running on a center-right party ticket, despite Morales’s threats to deny state resources and projects to her administration.

In the city of La Paz, popular incumbent mayor Luis Revilla collected more than 50,000 signatures in a week to secure standing for the new center-left Sol.bo (Sovereignty and Liberty) party, after his former party (the MSM, or Movement Without Fear) was decertified due to a poor showing in the national elections. After Revilla was forced (by anti-incumbency laws) to step down before seeking another term, the MAS-backed interim mayor promptly alienated the electorate by seeking to undermine many of Revilla’s accomplishments. In March, Revilla defeated the MAS candidate by a margin of almost 20 points.

In the Chuquisaca department, a significant electoral controversy has arisen over a gubernatorial candidate (incumbent Esteban Urquizo) chosen directly by Morales himself, when internal MAS factions could not resolve their differences. Local campesino groups backing national peasant leader Damián Condori—who, only last October, famously ordered his constituents to “vote in line” for the MAS or face community justice—split to form a rival independent party, which garnered 42% of the vote vs. 49% for MAS.

Under the election rules, the close vote should have triggered a runoff. But a controversial ruling by the departmental TSE (Supreme Electoral Tribunal) invalidated the votes cast for a third-party candidate after-the-fact, handing the victory to MAS. Condori’s backers have appealed and mobilized to resist the ruling, which they characterize as an “attack on democracy.”

Other arbitrary and anti-democratic tactics by the MAS-controlled TSE have generated different forms of popular resistance and backlash. Nine days before the election, the Beni TSE decertified the entire 228-member slate of the rival center-right party—due to the party’s illegal dissemination of polling results—whose gubernatorial candidate was leading in a hotly-contested race. As a result, 20% of the voters failed to show up at the polls (although voting in Bolivia is compulsory), and the election was forced into a runoff between the MAS and a second-place candidate. The TSE’s punitive ruling, authorized by a law which many believe to be unconstitutional, was criticized by international electoral monitors as well as Bolivia’s human rights Ombudsman.

Earlier in the campaign, the candidacies of prominent ex-MAS deputy Rebeca Delgado and ex-MAS senator Eduardo Maldonado were derailed by another controversial TSE ruling that prohibited recent Plurinational Assembly delegates from running for local office because they allegedly lacked local residency. The popular Delgado transferred her support to a centrist opposition candidate for mayor of Cochabamba, who went on to defeat his MAS rival by 20 points.

In terms of governance, the practical consequences of MAS’s electoral losses at the departmental and local level are not immediately clear. As Richard Fidler notes, Bolivia is not a federal state with a clear division of powers among the various levels of government, and the complicated process of defining jurisdictional autonomies under the new Constitution remains incomplete. Still, important decisions will be made this year regarding the redistribution of hydrocarbons revenues to departments and localities (the “fiscal pact”), based on the 2012 census, in which the newly elected governors and mayors will participate.

Also, the fact that MAS controls a majority or plurality of the delegates in 8 of 9 departmental assemblies (excepting Santa Cruz) could create conditions of ungovernability where opposition governors have been elected. At the very least, the election results will complicate the administration of Morales’s third term.

At the same time, setbacks at the subnational level should not be read as a popular rejection of the MAS party’s national political project, or of the MAS government. As Kathryn Ledebur of Bolivia’s Andean Information Network has noted, local and regional elections in Bolivia tend to have a different logic than national ones, with voters favoring individual candidates (not party platforms) that directly address their immediate concerns. The same voter may have different priorities in different electoral contexts.

Despite its inability to capitalize on Morales’s October landslide, MAS was the only party with a true national presence in this election, running candidates in every department. Many of the opposition candidates who successfully challenged the MAS represent regional or local parties, with diverse perspectives across the political spectrum and limited prospects for national unity. While a few candidates with national political aspirations—such as Félix Patzi, Damián Condori, and perhaps Luis Revilla—may emerge from this election, at the national level political opposition to the MAS remains fragmented.

Still, the subnational elections reveal a disconnect between the MAS leadership and its base in some regions, perhaps reflecting the increasing diversity of interests that the party now represents as well as its growing concentration of power. Whether the party will recognize its misreading of the electorate and treat the election results as a “wake-up call” for more local accountability, as anthropologist Xavier Albó suggests it should, remains to be seen. While Morales has publicly acknowledged the problems of corruption and poor candidate selection in some cases, he has also appeared to blame the party’s setbacks largely on choices made by the social movements themselves.

Increasingly, Bolivian voters seem to be using the subnational elections as a means to effect checks and balances against the MAS party’s growing hegemony. This reflects the greater sophistication of the electorate after 30 years of democracy, and its resistance to being manipulated or taken for granted. The prevalence of cross-party voting in this election, with voters choosing mayors and governors from different parties, is further evidence of this trend. It is a reaffirmation of local democracy that bodes well for Bolivia’s political future.