In Bolivia and Honduras, ambitious presidents have aligned with the courts to overturn constitutional term limits. Is Honduras’s current electoral crisis a harbinger of Bolivia’s political future? 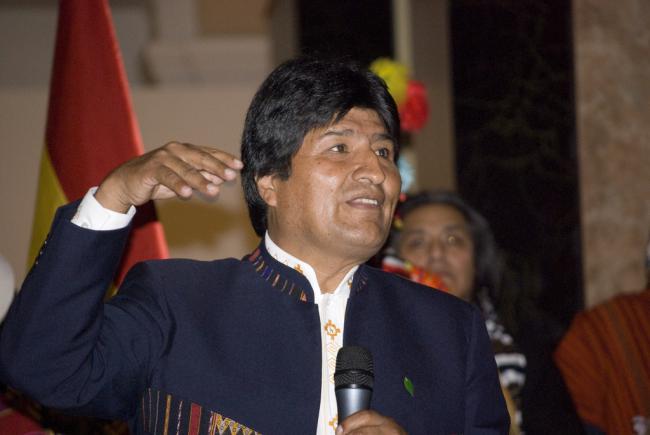 Last November, Bolivia’s Plurinational Constitutional Tribunal (TCP) set aside the term limits enshrined in the country’s recently-adopted 2009 constitution, paving the way for Evo Morales to run for a fourth consecutive presidential term in 2019. The controversial ruling, which defied the results of a binding popular referendum held in February 2016, when voters narrowly rejected Morales’s bid to run again, has continued to roil Bolivia’s political landscape.

At the same time, a similar court decision in Honduras led to a successful reelection bid by conservative incumbent President Juan Orlando Hernández, after a bitterly contested vote with widespread evidence of state-sponsored fraud. Massive protests have persisted through Hernandez’s inauguration, leaving more than 30 dead, hundreds wounded, and thousands detained.  The opposition coalition has refused to recognize the election results. The country seems to be tottering on the brink of a constitutional crisis or, perhaps, civil war.

Some critics of Morales have seized on these events as a harbinger of Bolivia’s electoral future. “What the avowed socialist president of Bolivia and the conservative, iron-fisted president of Honduras have in common,” writes political analyst Chris Sabatini, “is a shared thirst for power and disregard for institutions and constraints on their authority….Any future election [in Bolivia] will likely follow the Hernández playbook of securing electoral victory [at any cost].”

Could an electoral crisis like the one in Honduras unfold in Bolivia? To be sure, there are obvious parallels, beginning with the controversial court rulings that invalidated constitutional term limits in each country, each fraught with political maneuvering and based on highly dubious legal grounds.

Prior to 2015, Honduras had perhaps the most rigid presidential term limits provisions of any constitution in the world: a single-term presidency, a non-amendable ban on reelection, and a provision that any official who attempted to alter the ban could be removed and barred from office for 10 years. This last “poison pill” clause was used to justify the ouster of former President Manuel Zelaya in a 2009 military coup—on the grounds that his efforts to poll citizens on the question of calling a new Constituent Assembly represented a disguised and unconstitutional attempt to do away with term limits.

Just before his own inauguration in 2013, Hernández, then-president of the national Congress, and a strong coup supporter, illegally replaced four of five justices on the Supreme Court’s Constitutional Chamber with ruling National Party stalwarts. Two years into his first term, the Court overturned all three term limits provisions, as an “unconstitutional constitutional amendment” and a violation of free speech rights. As legal scholars have noted, these claims are extremely dubious since the provisions in question were not amendments to, but central features of, the 1982 Constitution. Free speech claims, while relevant to the onerous “poison pill” provision, hardly provided a justification for the wholesale elimination of constitutional term limits.

In Bolivia, following Morales’s surprise referendum defeat—a huge blow, after three consecutive electoral victories with margins exceeding 60%—the ruling Movimiento Al Socialismo (Movement Towards Socialism, MAS) party became obsessed with securing his reelection another way. Blaming the loss, by a margin of only 136,000 votes, on a well-timed scandal-mongering conspiracy orchestrated by right-wing opposition forces and the U.S. Embassy, the MAS openly debated alternative reelection strategies. These included: a second constitutional referendum, triggered either by a vote by the Plurinational Assembly or a citizens’ initiative; a renunciation of office by Morales 6 months before the elections; or a judicial ruling to reinterpret the Constitution inaugurated by Morales and the MAS less than a decade earlier.

In the current case setting aside term limits, the Constitutional Tribunal found that the inalienable right of citizens “to elect and be elected,” derived from the Inter-American Convention on Human Rights—the main human rights treaty in the hemisphere—supersedes the Bolivian Constitution. According to Human Rights Watch director Jose Vivanco, this interpretation is a gross misreading of a clause designed to prevent abusive governments from arbitrarily barring opposition candidates, not to impede constitutional term limits. Morales himself has frequently invoked national sovereignty against international human rights claims asserted by indigenous and environmental groups that oppose his government’s extractivist policies, and has threatened to withdraw Bolivia from the Inter-American Human Rights Court (IACHR).

For legal scholar David Landau, these rulings are examples of “abusive constitutionalism”—the misuse of human rights doctrine to help erode, rather than safeguard, democracy. While the manipulation of constitutional principles is not new in Latin America, he argues, the use of high courts to legitimize political maneuvers is a relatively recent, and growing, phenomenon.

Despite these similar judicial precedents, it’s unlikely that Bolivia’s next presidential contest will resemble Honduras’s stolen election, with its blatant vote-rigging and seeming complicity of an electoral branch that is constitutionally controlled by the executive branch. In Bolivia, the Supreme Electoral Tribunal (TSE), though elected by the MAS-controlled Congress, constitutes a fourth arm of government with independent legitimacy. Even Morales’s most persistent detractors concede that electoral fraud has been negligible under the MAS regime, although some caution that Morales could seek to have the courts suspend, postpone, or even annul the election if an unfavorable outcome is anticipated.

Interestingly, Bolivia’s TSE, which organized the 2016 referendum and is responsible for enforcing its results, recently grabbed headlines by seeming to question the compatibility of the Constitutional Tribunal's ruling with the referendum. While the judicial ruling makes no reference to the referendum, the TSE insists that it is “mandatory, binding, and currently in effect”—raising the improbable hope in some opposition quarters that the TSE could ultimately refuse to qualify Morales as a candidate.

The more likely scenario is that Morales will run and prevail again in 2019 through “legitimate” means, including the vast advantages of incumbency provided by MAS control of the state apparatus and resources. While there is little doubt that Morales has suffered a loss of legitimacy from the Constitutional Tribunal ruling, his support in most opinion polls still hovers around 50%, with a hard core of 30% representing his rural peasant base. And while the 51% “null vote” in December’s judicial elections—encouraged by five former presidents and opposition politicians—has been celebrated in some quarters as evidence of an anti-Morales groundswell, past experience shows that Bolivians vote differently in judicial and municipal contests (and referenda) than they do in selecting a national leader.

A fourth Morales win will also be due in no small part to Bolivia’s still resilient economy. Thanks to Morales’s aggressive state-led economic policies and prudent fiscal management, Bolivia has sustained one of the highest growth rates in Latin America for the past several years. Bolivia has also experienced the largest reduction in income inequality—in contrast, for example, to Honduras, which has the most unequal income distribution in the region.

What’s more, as political scientist Jorge Lazarte has noted, Bolivia has perhaps the weakest political opposition of any Latin American country, with no candidate available to compete with Morales’s power, charisma, and appeal to the country’s majority-indigenous population. Left and right opposition forces remains fragmented, with little potential for unity. The main opposition leaders, still with roots in elite sectors, have been unable to generate a discourse that appeals to a broad popular base.

As in Venezuela currently, the loss of government legitimacy in Bolivia has not produced a revitalized opposition. This also contrasts with Honduras, where progressive indigenous, campesino, and urban popular sectors joined with center-right anti-corruption forces in a broad front coalition to challenge the incumbent president.

Meanwhile, as Pablo Stefanoni observes, the hyperbolic discourse among some opposition groups that denounce the Morales government as worse than the 70’s dictatorship—or, for that matter, as similar to the Hernández regime in Honduras—undermines the potential for opposition unity. In the large cities,  Stefanoni notes, progressive opposition forces are increasingly alienated by the divisive social media commentary that “combines a legitimate critique of [the government’s] institutional deficits with evident doses of social racism.”

In short, despite the widespread mistrust in Bolivia of leaders who maneuver to remain in power, it’s unclear that a majority of voters want, or are ready to accept, an alternative to the status quo.

A final point of contrast between Honduras and Bolivia is evidenced by the hypocritical response of the U.S. government and the Organization of American States (OAS) to the revocation of term limits in the two countries. In Honduras, the 2015 judicial ruling abolishing term limits evoked no reaction from the Obama administration. Two days after the recent election, amidst growing evidence of fraud and violent police repression of protesters, the U.S. State Department certified that Honduras had made sufficient progress on improving human rights and fighting corruption to receive millions more in security aid. Subsequently, the U.S. government was one of the first to formally recognize Hernández’s stolen victory.

For its part, the OAS also declined to investigate Hernández’s manipulation of the judiciary for political ends, despite repeated requests from popular opposition forces. OAS Secretary General Luis Almagro, who has often allied with rightwing regimes in the region, reversed course on Honduras last December after receiving a surprisingly critical report from his on-the-ground electoral mission, and even initially called for a new presidential vote.

In addition to recounting gross anomalies in the electoral process, the report strongly condemned Hernández’s efforts to rewrite the Constitution through the courts. The electoral mission was headed by none other than Jorge "Tuto" Quiroga, a former conservative Bolivian president who has denounced Morales as a dictator before the IACHR. Quiroga was one of the five opposition leaders who actively worked to undermine Bolivia’s judicial elections in an effort to delegitimize the Morales government. Ironically, by using the Honduras report to advance his own domestic political agenda, Quiroga succeeded in partially restoring the OAS’s credibility in the region—albeit temporarily, since Almagro has since announced his “firm intention to work in the future with the elected authorities of Honduras.”

In contrast, within days of the Constitutional Tribunal ruling invalidating term limits in Bolivia, Almagro registered his strong disapproval, while the U.S. State Department expressed its deep concern with the court’s “disregard [for] the will of the Bolivian people.” Morales declared that the U.S. reaction convinced him to run again, and petitioned the TSE to condemn the U.S. for meddling in Bolivia’s internal affairs—just as it had in 2002, when Ambassador Manuel Rocha threatened to withhold U.S. aid to Bolivia if Morales won the election.

In 2002, voters responded to the unwelcome U.S. advisory by boosting Morales to an unexpectedly strong second-place finish.  A similar backlash in 2019 could be just what Morales needs for a fourth-term victory.