The State of What Union?

In the context of the border wall debate, politicians and pundits across the political spectrum conveniently omit the grim realities millions of migrants face. 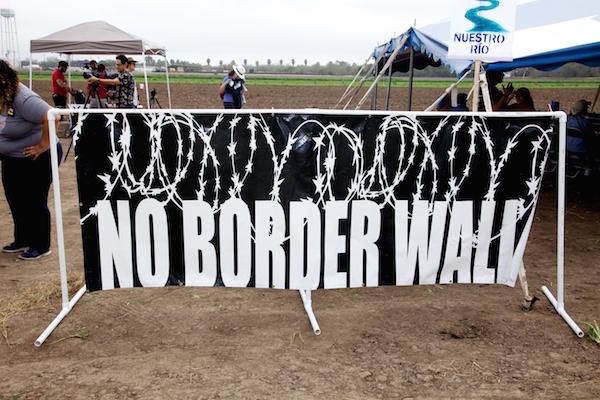 At the precise moment in his State of the Union address when President Donald Trump was reassuring the U.S. public yet again that he would build a border wall, I arrived at the San Juan Bosco shelter in Nogales, Sonora, Mexico with a group of students from Prescott College. We were about to a face a completely different interpretation of the very same “union.” In the shelter’s chapel, people who had been recently deported, banished from, or repelled by the United States sat on folding metal chairs. After the students introduced themselves a woman sitting towards the front asked, “Why are you here? What benefit does it bring us?”

A long uncomfortable pause followed, partly because I interpreted the question from Spanish to English, and partly because the students had no immediate answer.

“Have you come,” the woman asked interrupting the silence, “to tear down that Berlin Wall?”

Indeed, with one swift question the woman exposed the most glaring omission by politicians, policymakers, and the media around the U.S. southern border debate: that a colossal border enforcement apparatus has already been built, and it is causing immense and visible suffering. But her message revealed something deeper, another understanding of the very “union” in discussion only a few miles away in the United States. Trump very clearly defined the union by its hardened, well-defined borders. The people in the shelter, however, had another story that challenged the legitimacy of that exclusion: they were making a declaration of belonging to the same so-called union.

In fact, before the students could muster an answer to the woman’s question, another man in the chapel stood up and told the student group without preamble: “We do all your labor. All of it.”

And since many in that room had longtime ties as residents of the United States, the message imparted at the State of the Union—even with the faraway pomp and circumstance—impacted their families and livelihoods directly, painfully, and sometimes violently. In 2009, anthropologist Josiah Heyman posed the question, “What if we think of Mexico and the United States as one country, unified, rather than divided by the border?” Here in the San Juan Bosco shelter, this blueprint of a new type of union was not hypothetical, but a lived reality.

Meanwhile in Washington D.C., Trump laid out what he called his “four pillars” of immigration to a rousing applause from Republicans. While suggesting that there would be a legalization process for Deferred Action Child Arrival (DACA) recipients, he simultaneously called for more border and immigration enforcement build-up—something that many DACA recipients vehemently oppose.

It only took a few minutes in the shelter to turn the U.S. immigration debate on its head, for us to see that significant dynamics, and wide sectors of people, are left out. Indeed, before our eyes on the country’s fringes, those who were normally excluded from the conversation were giving a more real and raw State of the Union.

“Why is it so hard for us and so easy for you to cross the border?” another man from the back of the chapel asked us. There was another pause while the students contemplated their relative freedom of mobility and all the heavily policed divides across planet earth that separate the rich from the poor, disproportionately white people from people of color.

“Did Mexican officials,” the man continued, “ask you for papers when you crossed the border?” One student answered no, and it came out rather reluctantly, almost as if she wished that they had.

The people in the shelter were not repelled by the figurative border wall that Trump discussed that night, and so consumes the D.C. circles, but at least partly by the actual towering border wall that snakes up and down through Nogales’ hills and canyons. This existing $4 million per mile wall is only the most prominent symbol of a much more expansive and expensive U.S. enforcement regime with jurisdiction that extends 100 miles inland from all borders and coasts. In the U.S. Southwest, and increasingly throughout the country and the world, these are zones filled with heavily-armed border agents who run roadside checkpoints and lead roving patrols, places where overhead drones embark on surveillance missions and facial recognition cameras transfer pictures to Homeland Security databases.

As what happened to many people in the Nogales shelter, if you are caught in this thicket of surveillance—that very much extends further into the interior of the United States with Immigration and Customs Enforcement (ICE) operations—it means incarceration and formal expulsion from the country. This was not something that was simply conceived that January night in Washington, or even since Trump took office in 2017. It was a fortification that had been built up significantly over several decades, with billions of dollars and bipartisan support.

For example, the actual, physical wall just down the road from where we were in the San Juan Bosco shelter was not a “14th century solution” to a “21st century challenge,” as Henry Cuellar, a Democratic representative from southern Texas, penned in a January article for CNN titled “The answer to border security is technology, not wall.” Indeed, that wall was actually a late 20th century “solution,” part of Operation Safeguard under the Bill Clinton administration, implemented and deployed just when the North American Free Trade Agreement (NAFTA) created conditions that would displace millions of small Mexican farmers in the mid 1990s. Then, just like now, the wall itself represented just one part of a larger exclusionary system and strategy, hardly able to stop people on its own, a “speed bump,” as one Border Patrol agent put it to me.

That wall was fortified again after the Secure Fence Act of 2006, and while Cuellar’s article did recognize that there were 654 miles of existing walls and barriers in his CNN article, it did not mention that top Democrats such as Hillary Clinton and Barack Obama voted for it, nor that the wall strategically blocked off traditional crossing points in urban areas and rerouted unauthorized border crossers to dangerous and desolate parts of the 2,000-mile U.S.-Mexico border. Politicians and the media rarely mention this strategy—known as Prevention Through Deterrence—which has been in place for more than 25 years, nor do they speak of the more than 7,000 people who have died because of it. However, the people in the shelter that night knew all about the dead. Only a week before, in that very chapel, there was a funeral for a six-week-old from Honduras, who had died, like many other migrants, from exposure to the elements. 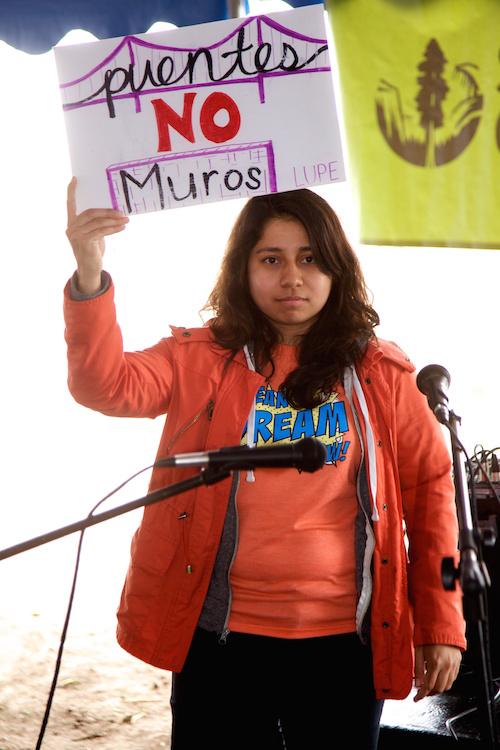 Although Cuellar’s point appears “progressive” and defiant of Trump, like most, he doesn’t mention the dead anywhere in his piece. Instead, in what has become a standard, though debated, position for the Democrats, he calls for a “use of modern technology, increased border personnel and better coordination with our southern neighbor,” as if such strategies haven’t always gone hand-in-hand with wall building. Cuellar suggests simply another version of what Trump demands—a union based on hardened, militarized borders meant to exclude and expel the very people in the chapel. Whether it be Trump or Cuellar’s prescription, they are both building upon the same deterrence border system first developed in the 1990s: a confluence of wall, technology, and more Border Patrol, an agency whose ranks have increased five-fold from the Clinton operations of the 1990s, from 4,000 to 21,000.

The combined annual budgets of Customs and Border Protection, the largest federal law enforcement agency in the United States, and ICE reached $20 billion in 2017, a number that has skyrocketed since the early Clinton years when border and immigration enforcement budgets totaled 1.5 billion per year. These massive increases of technologies and personnel have not only been a windfall for corporations in high-tech, big brother surveillance, and the business of incarceration, but have also produced the most massive apparatus of exclusion and expulsion in U.S. history, a grimacing fact that you would never deduce from today’s watered down and highly-limited debates.

Today, politicians debate only the smaller details of this exclusion: its extent, how quickly it expands (it is always expanding), and who it impacts. For example, political scientist Victoria Defrancesco Soto, in a January piece for NBC titled “Democrats should give Trump his wall if it means Dreamers can stay,” wrote that the wall was “an expensive and useless toy that [Trump] desperately wants,” so the Democrats should just hand him $20 billion in order to negotiate. In The Washington Post, global strategist Zachary Karabell echoed Soto’s message. “Schumer and Democrats should just write Trump a blank check for border security, and then focus their energy on preserving legal immigration,” he wrote.

In both cases, not one word addressed the implications of death and damage from the current border strategy. To many politicians and pundits, the border structures stand in an empty land affecting nobody, literally dehumanized. This takes the people at the San Juan Bosco shelter out of the discussion completely. It is, however, “pragmatic.” As Soto wrote, politics “in reality is about horse trading.” Despite some resistance from members of the Progressive Caucus, all signs are showing that this “horse trade” will happen: prominent Illinois Democrat and immigrant champion Rep. Luis Gutierrez said, “It's an awfully wasteful burden on the taxpayers to build a wall, but I've come to a conclusion that lives are more important than bricks.”

At the chapel in Nogales, when another man began to speak, he told the group that English was his stronger language. Like many DACA-recipients today, he came to the United States at a young age. He had lived there for decades, he was married, had a child, and a business. His expulsion was so fresh that he showed us the red gashes from where handcuffs cut into his wrists.

But that was the least of his worries.

“Will I ever see my child again?” he asked the group, unable to hide his tears.

There was something about that initial question about the Berlin Wall when we first arrived. It implicitly addressed the violence and artificiality of the ever-growing, rarely unpacked nor debated, border enforcement apparatus. It understood an entirely different state of the union than Trump’s, the connection of people in multifaceted ways across a political, and ultimately imaginary line. The real question, for the people in the shelter, was not whether a wall should be constructed, but rather how it should be torn down.

As that man told us before we left the chapel that cool January night in Nogales, “I will do whatever it takes to see my child again, whatever it takes.” These words should have also been broadcast too that night across the United States; there might not be a better rebuttal.

Todd Miller is a journalist and the author of Storming the Wall: Climate Change, Migration, and Homeland Security and Border Patrol Nation: Dispatches from the Front Lines of Homeland Security. He is on the editorial board of NACLA and resides in Tucson, Arizona.