At a national convention for gun rights activists, a public official from the Brazilian Secretariat of Culture pledged state resources to arms lobbyists. 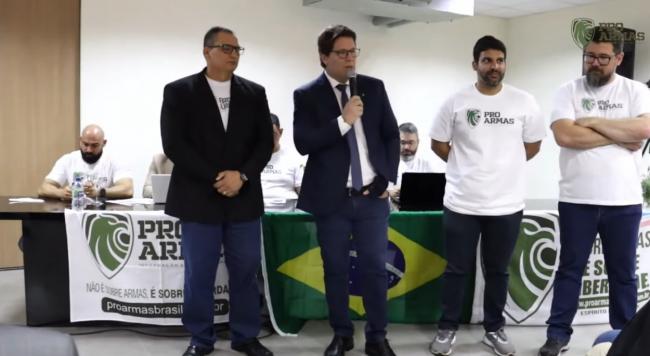 An earlier version of this article was published in Portuguese by Agência Pública.

Translated to English by Matty Rose from the Latin America Bureau.

“For the first time, we’re going to give Rouanet [Law] money to firearms events, and it’s going to be awesome.” These were the words of André Porciuncula, the then National Secretary for the Incentivization and Promotion of Culture during the national convention of PROARMAS, Brazil’s largest gun rights lobbying group, on March 28. At the time of the event, Porciuncula was still the second most important figure within Brazil’s Special Secretariat for Culture, having occupied the role since September 2020. During his tenure, Porciuncula was responsible for analyzing and approving proposals that sought funding from Brazil’s Law for the Promotion of Culture, widely known in the country as the Rouanet Law.

According to Porciuncula, the government had made R$1.2 billion ($230 million) available for two “mega-events”—money which, he claimed, could be used for pro-gun content creators. “We are in the process of launching an audiovisual package that you can use to make documentaries, films, webseries, podcasts. Why?…to make films about weapons, about the importance of arms for society, the importance of arms in guaranteeing human freedom,” he said.

The “mega-events” Porciuncula referred to will mark the bicentenary commemorations of Brazil’s independence, which will be celebrated in September—just a month before the October 2022 elections. “Firearms were fundamental in guaranteeing our independence. So [let’s] put on an event in which firearms are the star of the show, so we can show the public a different way of looking at [the issue of] firearms,” Porciuncula said.

The “strategy,” according to Porciuncula, is to shape the collective imagination regarding firearms, with the aim of changing public opinion and winning support for pro-arms causes. To do this, Porciuncula stated that he had put a team of people and resources from the Secretariat of Culture at the services of pro-gun organizations, despite the fact that he would soon need to leave his governmental role in order to run for re-election in the October elections. “I’m here for you guys, for any doubts [that you might have], for the duration of my time in the Secretariat —which I have to leave this week in order to run—but we’re going to leave a team behind who are totally aligned with the Special Secretariat for Culture.”

During the March 28 event, Porciuncula spoke alongside his then boss, Culture Secretary Mário Frias. Like Porciuncula, Frias defended the use of funds for audiovisual content for the pro-firearms movement. “It’s really important for us to work on the audiovisual side of things. If we are believers in firearms, then we need to create heroes. We need to understand that narratives, especially for young people, are not about statistics. You’re not going to convince these guys that you want a better Brazil by using numbers, but by using culture.”

Both Frias and Porciuncula have since left their government roles to run for office in this year’s elections as part of President Jair Bolsonaro’s party, the Partido Liberal (Liberal Party). Frias was exonerated from his role on March 30 with Porciuncula following suit a day later, just a few days after the PROARMAS national convention.

Officially, the Secretariat for Culture announced R$30 million ($5.8 million) in funding for audiovisual productions to mark the bicentenary. According to the Secretariat’s policy document, documentaries, fiction films, or long and short-form animations that engage with the theme of independence all qualify for the funding. The Secretariat has not responded to a request for comments on the R$1.2 billion ($230 million) that Porciuncula promised in his speech at the PROARMAS convention or claims made by the former secretaries.

Once Criticized by Bolsonaro, Rouanet Law Now Used To Publish a National History of Firearms

The Rouanet Law has been a constant target for criticism from Bolsonaro—who has called the law “a disgrace” and an “obvious waste of resources”—and his supporters, who claim it has been used by previous governments to “buy the support” of the creative class and celebrities.

The Rouanet Law is the main mechanism through which the arts receive public funding in Brazil. The Law allows cultural producers to apply for private funding to finance cultural initiatives that have been approved by the Secretariat for Culture. In exchange, companies can deduct part of their investment from the total income tax that they owe. Funding can be awarded via donations or sponsorship; the latter means allowing the funders to appear in advertising for the project. 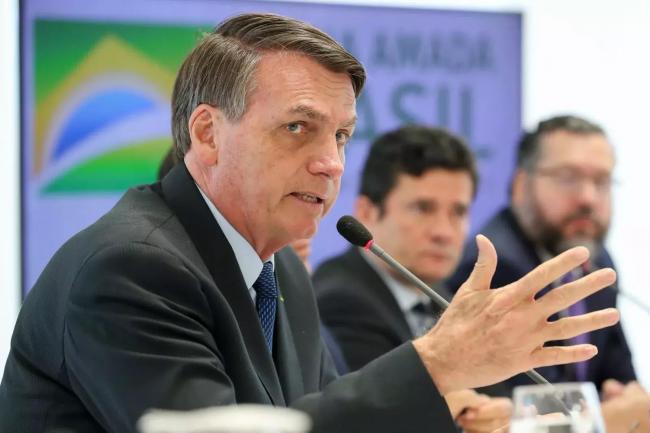 This same mechanism was used recently by Bolsonaro’s administration to finance the publication of a book about the history of firearms in Brazil, approved by the federal government’s Special Secretariat for Culture. Taurus, the largest manufacturer of light firearms in Brazil and one of the largest manufacturers of revolvers in the world, is behind the book’s funding and will receive the tax benefits laid out in the Law for the Promotion of Culture. The company has invested R$336,000 ($65,000) in the book’s production.

The project, which Porciuncula approved last December when he was still the Secretary for the Promotion of Culture, involves the production of a book entitled Armas & Defesa: A História das Armas no Brasil (Arms & Defense: A History of Firearms in Brazil), which is 120 pages long and whose first print run will consist of 3,000 copies. According to its own description, the book will be “about the history of firearms in Brazil with a focus on major historical events right up to the 21st century.” The book will be distributed to Brazil's public library system and ebook and audiobooks will be freely available on the project's website.

In total, Taurus has contributed R$2.6 million ($500,000) to Rouanet Law projects during the Bolsonaro government. This figure went towards six different projects, all of which were approved in 2021 by the Secretariat for Culture. Before the Bolsonaro administration took office, the company had only ever financed one project using the Rouanet Law, in 2009, at a cost of R$15,000 ($2,900).

After the publication of this report in Portuguese, Taurus’ press secretary responded with the following statement: “Taurus, a Strategic Defense Company, wishes to state that it did not fund a book about firearms. The book that is being sponsored via process no. 01400002533202119 of the Law for the Promotion of Culture, which concerns historical and culture facts, such as the first referendum carried out in Brazil in 2005 [regarding the prohibition of the commercialization of firearms and ammunition], which reflected society’s attitudes towards the firearms market.”

The issue of gun rights is a key priority for Bolsonaro. In addition to openly encouraging Brazilians to arm themselves, his government has taken a number of measures since 2019 to increase the general population’s access to arms and ammunition  and weaken control mechanisms and regulations. These changes have particularly benefited what are known as CACs, or groups of individuals registered as hunters (caçadores), target shooters (atiradores esportivos), or collectors (colecionadores), who are authorized to buy firearms. Such groups have exploded in number over the last three years. In 2020, a record number of licenses were granted: more than 100,000—a 40 percent increase compared to the year prior, which had already been a record year. Before Bolsonaro came to power, the average number of CAC licenses granted per year was around 15,000. In 2019 and 2020, this average shot up to 89,000. Between January and April 2021 alone, there were a total of 48,000 new registrations, taking the total number of CACs across Brazil past 362,000.

Alice Maciel is a reporter for Agência Pública in Brasília focusing on politics, human rights, and the environment.

Bruno Fonseca is a multimedia reporter with Agência Pública who works with infographics, data, videos, and animation.