After vowing to do things differently, the Boric administration has invoked a familiar playbook in Mapuche territory. The difficult of breaking with the status quo speaks to the entrenched power of the Right. 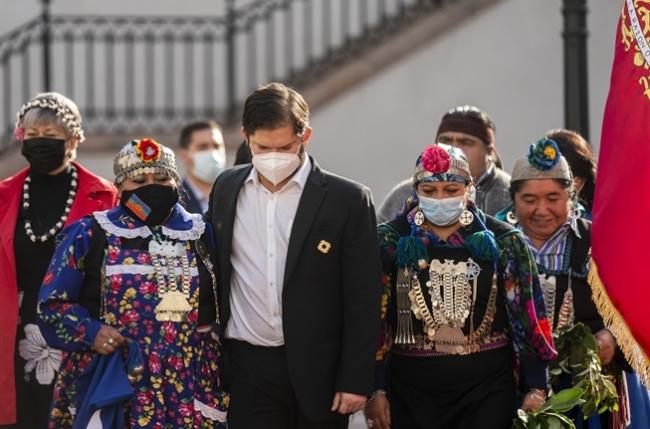 Days after Chile released the draft of the new constitution set to replace the one drafted in the dictatorship-era, President Gabriel Boric’s government declared a state of emergency in the so-called conflict zone in Araucanía. Indigenous Mapuche communities that have long resisted the dominance of extractivist multinational forestry companies in the region have increasingly laid claim to ancestral land, including with demands for autonomy.

In his first address to the Chilean people in March, President Boric directly addressed the “problem” in southern Chile. "The conflict…used to be called ‘the pacification of La Araucanía’—what a crude and unfair term! Later, some people referred to it as ‘the Mapuche conflict,’” he said. “No ladies and gentlemen, it’s not ‘the Mapuche conflict.’ It’s the conflict between the Chilean state and a people who have the right to exist. And there, the solution is not and never will be violence.”

Following the announcement, human rights groups confused by Boric’s U-turn have demanded a coherent explanation. Various Mapuche media outlets echoed Llanquilleo’s dismay, with independent media outlet Werkén calling the measure a “failure” of the Boric government. The move begs key questions. Is this a new era of the pacification of Araucanía? And ultimately, has Boric betrayed his electoral promises?

During Boric’s campaign, rallies were awash with the Mapuche flag—Chile’s new symbol of resistance that rose to prominent display during the historic 2019 uprising—and his platform promised a new approach to the centuries old dispute between the Chilean state and the Mapuche. Then, in a positive move for Indigenous rights, the Constitutional Convention approved language for the draft new constitution to declare Chile a Plurinational and Intercultural State.

But since Interior Minister Izkia Siches’ ill-fated visit to Araucania on March 15, relations with community leaders have deteriorated. During that visit, gunshots were fired, forcing the ministerial contingent to retreat. Mapuche representatives claim that they were not consulted about the visit and were alarmed when the ministerial contingent arrived at Temucuicui with a full military entourage, disregarding Indigenous protocol.

“Minister Siches had no intention of listening to the Mapuche people, her aim was solely to strengthen her ministerial position without tackling Mapuche issues,” Mapuche leader Victor Queipul commented. “In that case, we are unwilling to welcome her. If the ministry wants dialogue, they must follow the correct protocols.”

Queipul continued: “I am also calling for an uprising to defend ourselves by any means necessary. We are fighting for our rights. This government said it has a historic debt to us, but this should be through a political route, not military.”

The Mapuche are right to fear further military presence. A week into the Boric presidency, Rubén Collio, a prolific Mapuche environmental campaigner, was killed in a suspicious car accident on a remote highway. He was the husband of Macarena Valdés, an activist who led a campaign against Austrian company RP Global’s hydropower dam on the Tranguil River in southern Chile. After complaining of harassment by employees in an RP Global vehicle, Valdés was found dead in the family home by her adolescent son in 2017. Most recently, on May 5, a Mapuche activist taking part in a land reclamation action in Casa Piedra, Tirua was killed by a spray of bullets shot from the window of an unmarked car. 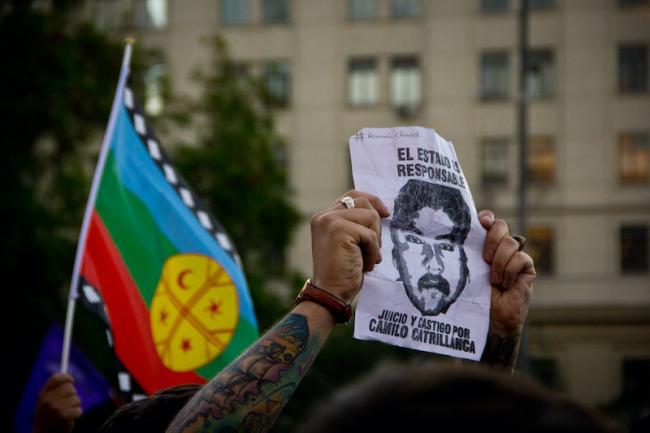 Despite Chile being signatory to the 1989 Indigenous and Tribal Peoples Convention of the International Labour Organization (ILO Convention 169) and the United Nations Declaration on the Rights of Indigenous Peoples, requiring that national governments consult Indigenous peoples “whenever legislative or administrative measures affect them directly,” the Chilean state continues to make decisions on security without adhering to such consultation processes.

“Rather than further militarizing an area with an already heavily militarized, corrupt, and violent police force, President Boric should honor his promise of providing restitution for Chile’s Indigenous population,” said Atus Mariqueo, press officer for the Mapuche rights organization Mapuche International Link. “It is these promises that won him the Presidency and the support of hundreds of thousands of Mapuche voters. Yet today he is taking the decisions that are functionally indistinguishable from those that he criticized his right-wing predecessor for.”

In the weeks leading up to the state of emergency, the government sought to approve a bill in Congress that would have permitted an intermediate state of emergency limiting the powers of the military to highway controls, as opposed to placing the region under full military control. The bill was rejected not just by conservative elements in Congress, but inexplicably by members of Boric’s own coalition.

Less than a week after the state of emergency went into effect, a death in the conflict zone at the hands of unknown killers sparked fresh alarm. Juan Segundo Catril Neculqueo was at work in Lumaco when he was shot in the head. Four other workers were badly hurt; all the victims are Mapuche. Speculators pointed the finger at radical Mapuche elements; however, the Coordinadora Arauco Malleco (CAM), an organization that is open about its militant actions in defense of Mapuche land, rejected accusations. “We categorically deny any part in the in the attack against workers in the Capitan Pastene area,” CAM said in a statement. “CAM carries out sabotage on forestry machinery and the output of big business. CAM does not attack workers, much less Mapuche workers.”

Catril was a leader of the Indigenous community Humberto Millahual and believed in a peaceful solution to the conflict. At the time of his murder, he was replanting native trees in a bid to restore the environmental damage caused by commercial plantations.

On Twitter, President Boric condemned Catril’s killing and vowed to catch the perpetrators. However, finding the culprits in the dirty war against the Mapuche may be an impossible task. The modus operandi of the murder fits the recent spate of attacks against Mapuche activists carried out by local police and security firms working for forestry and salmon companies, along with supremacist groups such as the Asociación Para la Paz y Reconciliacion en Araucania (APRA), a far-right group that claims to represent local business interests. APRA was behind a mob attack on peaceful Mapuche protesters in 2020.

Following the latest violence, ex-police captain Miguel Ángel Toledo went public with allegations that the “state of emergency only serves the interests of forestry companies.” He alleged widespread corruption among police deployed in Mapuche territory and claimed that there are security firms contracted by the forestry industry that are composed of police officers and detectives still in active service. As this is an illegal practice, fake companies are set up to hide their identities. He also claimed that two police officers from Santiago who did not get involved in these schemes were killed, yet again with shots to the head, presumably for opposing this practice.

Between a Rock and a Harder Place

For some, the declaration of a state of emergency can be construed as a continuation of hardline conservative policy, inherited from the old regime. The move has caused alarm in a country emerging from decades of state terror at the hands of the army and as yet unreformed police force. But the limited political arena within which Boric must operate is complicated. Mounting pressure has come from groups with vested interests in the “Mapuche conflict.” For instance, the trucker’s federation—which during Salvador Allende’s presidency in the early 1970s wreaked havoc on the economy by refusing to distribute vital goods, in effect causing artificial food shortages—have been one of the main agitators in the lead up to the state of emergency by once again blocking highways and causing public disorder, conflict, and scarcity.

It’s feared that as the referendum for the implementation of the new constitution nears, political murders and violence will increase, as those who stand to lose their privileges granted by the dictatorship resort to desperate measures to maintain their power.

Admiral Miguel Angel Vergara made a veiled threat within the context of the annual May 21 naval commemorations: “The country is not only threatened by eternal forces, but also most critically, from within. That is why, all true navy men, if necessary, are willing to do what it takes.”

The political panorama in Chile is confusing. While there is a clear progressive push propelled by the new administration, prevailing impunity upheld by the current constitution and the might of the business and dominant political sectors contradict this sentiment.

The inability of the new administration to respond to these challenges indicate how powerful those shadowy right-wing forces still are in Chile. Unreliable reporting by a biased concentrated media, the racist narrative that criminalizes the Mapuche quest for sovereignty, and a recent spate of insidious murders clearly demonstrate how sorely Chile needs a new constitution to begin the arduous task of breaking free from the shackles of the dictatorship.