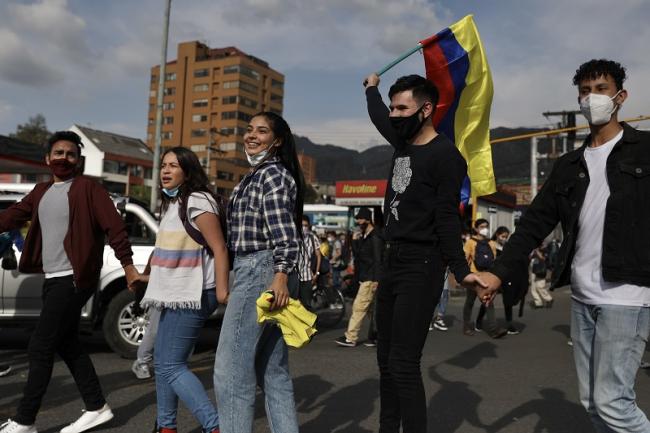 On May 12, marches in the Colombian capital of Bogotá that kicked off with a procession of brightly colored balloons ended by nightfall with violent clashes between police and demonstrators. Terror-stricken residents gazed motionless as tear gas and stun grenades, launched by militarized police against protesters, soared outside their homes.

As Colombia enters its third week of unrest, there are no signs that protests will let up soon. What started off as a rebuke of an unpopular tax reform has evolved into a broad-based movement, organized at the granular level by grassroots groups, each with their own demands and grievances. Heavy-handed police repression and fruitless dialogues have exacerbated citizen outrage.

Critics of the tax reform said it intended to close a pandemic-induced fiscal gap at the expense of the poor and middle class. A national strike that started on April 28 successfully pressured President Iván Duque to rescind the proposal. But with their initial goal now met, protests have expanded to include larger demands that reflect a pervasive discontent with President Duque and his governing Democratic Center party, founded by ex-president Álvaro Uribe, who faces strong allegations of paramilitary collusion. Along with escalating the armed conflict with leftist rebels, Uribe implemented neoliberal reforms that opened up the country to multinational extraction of natural resources, privatized national industries, weakened worker protections, and implemented tax policies that benefited elites.

Leading the protests and negotiations is the national strike committee, comprised of Colombia’s biggest trade unions, including the Central Union of Workers and the Colombian Federation of Education Workers. Their ample demands include calls for a universal basic income, free college education, the withdrawal of a health reform bill, the suspension of a forced coca eradication program, support for national industries and economies, an end to racial and gender discrimination, the dissolution of Colombia’s riot control police, and the reversal of a presidential decree that paves the way for hourly wages without benefits.

Many of these demands were initially set forth in a national strike in 2019, when a series of anti-government protests brought tens of thousands of people to the streets. Colombia seemed on the cusp of change then, but the onset of the pandemic stalled negotiations. As talks resume, strike leaders have once again voiced concern over Duque’s reluctance for dialogue. 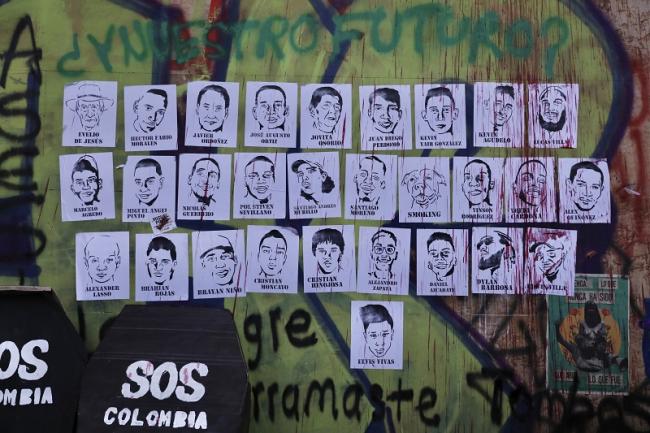 On the first day of talks on May 10, the strike committee chafed at the Duque administration’s disregard for their demands and for the lives lost during the strike. “There was no empathy with the victims of the violence that has been employed disproportionately against the demonstrators who protest peacefully,” said Francisco Maltés, president of the Central Union of Workers (CUT), in a press conference. “We demand that the massacre end.”

In 15 days of protests, police have reportedly killed 39 people, physically assaulted 362, and sexually abused 16 protesters. Viral videos show police opening fire at crowds of protesters and firing U.S.-made tear gas directly at protesters. Reports that a 17-year-old committed suicide after suffering an alleged case of sexual assault by police officers on May 12 have added fuel to the ongoing outrage at the excessive use of police force.

Negotiations resumed on May 16.

In advance of their meeting, some headway was made on a few demands. The health reform bill that critics said would weaken the public health system in favor of private insurance companies appears to have lost the political backing it needed to pass through Congress. In another victory for the strike, the Duque administration partially ceded on demands for free college tuition. The government announced that poor and middle-class students in public universities and technical schools would be exempt from paying tuition this fall semester. 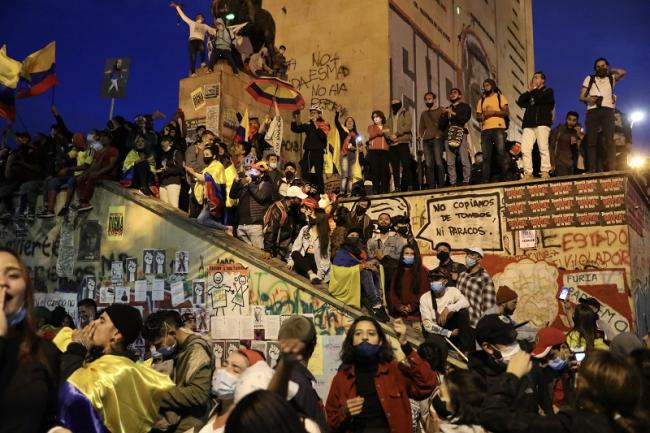 The strike committee is likely to push further and request permanent free tuition. Meanwhile, other demands, such as a universal basic income, will be harder to agree on. The committee calls for a minimum monthly wage (about $245) for poor Colombians while the pandemic continues to ravage the economy. But detractors believe its cost makes the program unviable.

Last year, the government launched a monthly “income solidarity” payment of about $43 for more than 3 million homes, a plan President Duque proposed to expand and pay for with his tax overhaul. The subsidies fell in line with the president’s conservative posture to restrain public spending.

But for many Colombians, the program has failed to protect them from hunger and poverty. More than 3.5 million Colombians were plunged into poverty in 2020, the unemployment rate soared to 16 percent as of March, and a study from the Andes University describes a 10-year setback in social progress due to the economic fallout of the pandemic.

Colombians like 20-year-old Leidy Torres report cutting back on meals after her and family lost their jobs. “Whereas before we ate meat, now we eat eggs,” said Torres at a peaceful roadblock last week, adding that her family no longer eats three meals a day.

Yet, concessions made so far signal the mounting pressures Duque is facing. The international community, including the United Nations and the European Union, has condemned the police’s excessive and sometimes lethal use of force and urged the administration to meet with strike representatives. More than 50 U.S. Congresspeople are calling for a freeze of sales of U.S.-made crowd control equipment, a suspension of U.S. aid to Colombian National Police, and an end to sales of weapons to Colombia’s riot police until human rights protections are set in place to protect protesters. 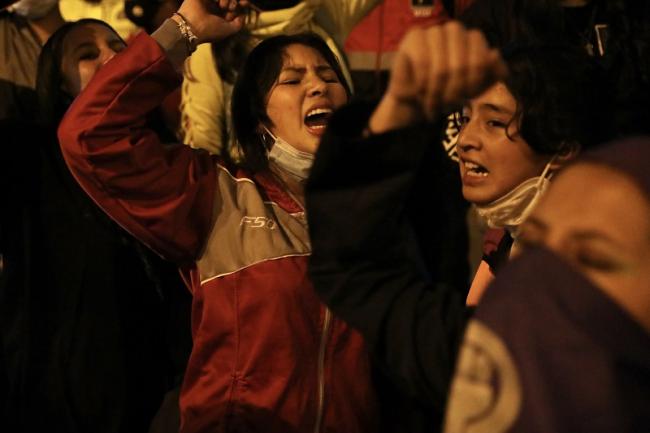 Resistance Will Not Be Silenced

The strike committee has requested an investigation into reports of police abuse and the dissolution of the ESMAD riot police, which is allegedly responsible for the majority of the killings. Despite being designed as a non-lethal force, the ESMAD has been accused of 34 killings between its founding in 1999 and 2019. These cases rarely reach a conviction because the ESMAD, along with the rest of Colombia’s police force, sits under the Ministry of Defense and is tried by military courts notorious for impunity.

On top of the demands made by the strike committee, local organizations also insist on being heard. In a recorded video, representatives of Puerto Resistencia, a poverty-stricken Cali neighborhood and one of the epicenters of police violence, requested greater social investment in youth programs, subsidies for students, lower taxes on small businesses, an investigation into the alleged police killings, safety guarantees for protesters, among other demands. “We won’t be excluded, we’re going to be heard,” said a masked protester in a video last week.

At a humanitarian space in the south of Bogotá, where locals have blocked police from accessing a bus station plaza, residents are organizing assemblies to decide on their own list of demands. At a recent assembly, community members gathered in groups to discuss and debate different policy proposals at the national and local level. 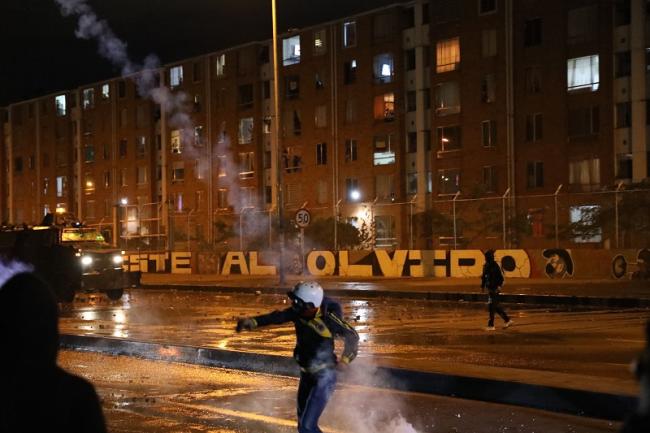 “We’re not willing to remain silent about the violence we’ve received historically from the government,” said Laura, a 26-year-old organizer who asked to remain anonymous. “Currently, President Iván Duque and his entire cabinet represent politics of death, politics against life.”

Inequality is a deeply rooted issue in Colombia, where poor farmers armed themselves in 1964 and waged war against state violence and land concentration by powerful elites. The rebel group known as the Revolutionary Armed Forces of Colombia (FARC) laid down its weapons following a peace deal with the government in 2016. But some of the most important points in the deal, which sought to address the underlying causes of the war, remain poorly implemented. The Comptroller’s Office reported it would take 10 additional years to fulfill the main objectives outlined in the deal, including rural investment and a coca substitution program.

For many protesters, a national dialogue is long overdue. But Duque will have to widen negotiations to include various sectors. Otherwise, there is a chance that protests will continue even if a deal is reached with the national strike committee. Grassroots groups that emerged in the 2019 strike are active once again and unwilling to back down on long-standing demands.

“Outcry will continue as long as we don’t receive a convincing response from the government,” said Laura. “The pandemic forced us to stay home and instilled fear in us, but neither the virus nor the lethal force of the police are going to silence us now. Our voices are as loud as ever.”

Christina Noriega is a journalist based in Bogotá, Colombia. Her work covers human rights, gender equality, the environment, culture, and social movements.