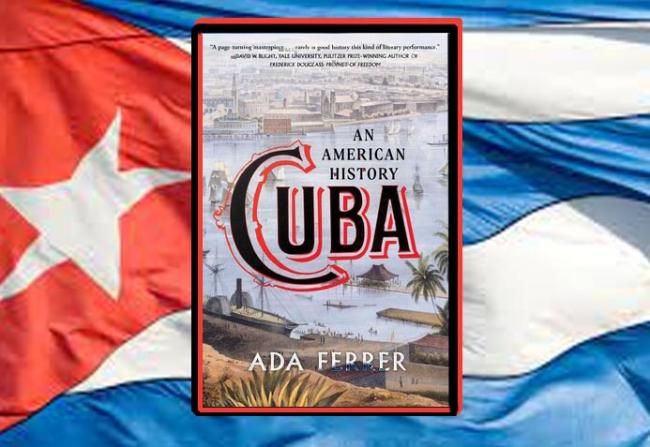 The Cuban flag—red, white, and blue, with five stripes and a star—displays the dreams of nineteenth-century criollo elites. The resemblance to its North American cousin was not accidental. First flown by criollos in Lower Manhattan in 1850, the newly-designed Cuban flag flaunted two related aspirations—to become part of the United States and to protect the institution of slavery.

In Cuba: An American History, Ada Ferrer tells the story of the island’s relationship with the United States from the colonial era to the death of Fidel Castro. Over the course of 470 pages, she relates the countries’ cooperation and antagonism, giving new importance to race and slavery—subjects whose impact has been marginalized in general-interest books about Cuba.

Whereas the U.S. role in Cuban independence is often overstated, Ferrer demonstrates that Cuba played a vital and underappreciated part in the American Revolutionary War. Cuban soldiers fought the British in North America and the Caribbean and, most importantly, raised funds for the Patriot army. Ahead of the decisive battle of Yorktown in 1781, Cuban money allowed General Washington to pay—and feed—his mutinous troops.

The wealth that made these gestures possible was generated by exports like coffee, tobacco and sugar, and sustained by a precious import: slaves. Money that helped liberate the United States was founded on racial subjugation. Strong ties between colonial Cuba and the United States continued throughout the nineteenth century, often driven by a mutual interest in defending slavery.

At the same time, the United States enviously beheld Spain’s Caribbean jewel. Many U.S. statesmen, including Thomas Jefferson, advocated buying the island. In 1820, Jefferson told John C. Calhoun that the United States should purchase Cuba “at the first possible opportunity.” Less than two decades earlier, the United States had bought 530,000,000 acres of land from France, and it was conceivable that Spain—whose regional hegemony was receding due to the vast independence movements across the continent—would also sell. Cuba, which was strategically located in the Gulf of Mexico, and the world’s leading sugar producer following the Haitian Revolution, seemed like the logical next acquisition.

The project had local support. Cuba’s landed elite worried that the wave of revolutions sweeping Spanish America would come to the island and abolish slavery. Annexation by the United States would safeguard the elite’s assets from the British who, having banned the slave trade in 1807, were trying to police the Middle Passage. Spain had outlawed slave trading in 1820, but it persisted via a thriving contraband market. As Ferrer writes, “of all the Africans forcibly transported [to Cuba] over three and a half centuries, more than 70 percent arrived after Spain illegalized the trade.”

Instead of buying Cuba, the United States found another way to assert itself in Spanish America: using the threat of force. In December 1823, President James Monroe announced that the United States would not intervene in the region provided that European powers stayed clear. Given that Spain still held Cuba and Puerto Rico, the Monroe Doctrine sought to limit Spanish influence in its Caribbean territories. As John Quincy Adams wrote, the belief was that in due course “the laws of political gravitation” would inexorably pull Cuba towards the United States, just as “an apple severed by the tempest from its native tree cannot choose but fall to the ground.” Cuban elites, who were concerned about abolition and sought closer alignment with the United States welcomed the policy. As Ferrer writes, “the Monroe Doctrine kept Great Britain—at once the globe’s greatest naval power and the world’s new crusader against the slave trade—out of Latin America.”

But the United States did more than just protect slavery in Cuba—it enhanced it. U.S. insurance and capital undergirded the trade, and North American ships and agents facilitated it. As Ferrer writes, “Instead of policing the illegal trade the U.S. consul in Havana helped run it.”

During the U.S. Civil War, Cubans fought on both sides, but predominantly for the South. The Confederacy sold cotton in Cuba, and bought wholesale goods like tobacco and rum, which helped fund other purchases including weapons and munitions. The Cuba–Southern connection was so strong that—with the approval of the authorities—Southerners shipped their slaves to the island, either for sale or for safekeeping.

The story of U.S.–Cuba interconnectedness is well known: Félix Varela and José Martí in New York, the United States’ opportunistic entrance into Cuba’s war of independence and subsequent neo-colonial rule, the revolution, the Bay of Pigs and the missile crisis. Where Ferrer’s history makes its mark is with regard to race—not just slavery but also racial policy in independent and revolutionary Cuba, as well as in the United States. She describes how the first wave of exiles from Castro’s regime—even the nonwhite ones—were granted many more state privileges in Miami than the city’s long standing Black community. Under Eisenhower and then Kennedy, Cuban migrants received “all kinds of resources: work permits, job training, English classes, small loans, subsidized child care, housing assistance, and job referrals.” As Ferrer explains, “Access to those benefits allowed Cubans to work for lower wages than others—sometimes for as little as half the wage garnered by their Black counterparts. One report estimated that between 1959 and 1962, twelve thousand African Americans lost jobs to Cubans.”

On the island, the revolution of 1959—in particular its educational policies, agrarian reform and the fact that so many of the exiles were white and upper class—transformed life for Afro-Cubans. With Jim Crow still in place in the American South, and other forms of discrimination outside it, Castro became a vocal champion and practical supporter of African Americans. He invited African American intellectuals to Cuba and, on a visit to the United Nations in 1960, he eschewed diplomatic custom by staying not in the plush hotels of Midtown Manhattan, but in Harlem’s Hotel Theresa. Three decades later, Cuban troops in Angola helped end Apartheid.

But these efforts overseas often contrasted with the situation at home. By 1961, Castro refused to acknowledge any vestiges of racism in Cuba. As Ferrer explains, “Castro deemed that two years of government action on the issue had successfully eliminated racial prejudice and discrimination.” This was inaccurate and suppressed public discussion of important questions. According to Ferrer, “Once the state declared the problem solved, talking about discrimination became more difficult. To point it out was ostensibly to threaten national unity and implicitly to accuse the state of lying or failing.”

Cuba: An American History is a nuanced study that highlights the vast connections between the island and the United States. In particular, Ferrer, a nineteenth-century specialist, superbly describes the importance of slavery to U.S.–Cuba relations between American independence and the Civil War. Throughout, Ferrer writes with clarity and passion. Her book is likely to become the definitive history of Cuba for this generation.