After a life of power behind the scenes, Pinochet’s wife recently died at 98. 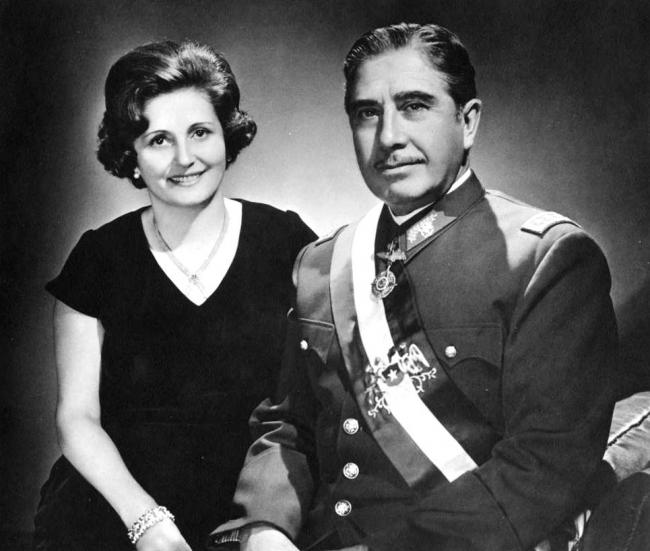 On December 16, María Lucía Hiriart Rodríguez passed away at Santiago's Military Hospital due to heart failure where she had been a regular visitor for the past few months. Also known as Lucía Hiriart de Pinochet, Lucía was the wife of Augusto Pinochet Ugarte, the brutal Washington-backed dictator who ruled Chile from 1973 to 1990. Since Pinochet’s death in 2006, Hiriart had rarely been seen in public.

“At the age of 99 and surrounded by family and loved ones, my beloved grandmother passed away,” wrote her granddaughter Karina Pinochet on Twitter. Many wondered whether the right-wing administration of President Sebastian Piñera would give the former first lady an official state memorial, but Hiriart’s funeral was held in private. Meanwhile thousands of Chileans took to Santiago’s Plaza Italia to celebrate the death of “la vieja” (the old woman), as she was called by her opponents.

While outside the country little attention was given to the passing of the general’s wife, she played an important role in Chilean politics, specifically in influencing her husband to support the September 11, 1973 military coup against the country’s socialist president Dr. Salvador Allende Gossens.

Hiriart was born on December 10, 1923 into a wealthy family in the north of Chile in the city of Antofagasta. Her father, Osvaldo Hiriart Corvalán was a lawyer, a former senator for the Radical Party and the ex-Interior Minister for president Juan Antonio Ríos. Hiriart’s family looked down upon Augusto Pinochet who she married in 1943 and who, as a then Chilean army Infantry School lieutenant, they considered beneath her class.

While Pinochet and Hiriart would eventually have five children together and become the most powerful couple in Chile, Hiriart initially struggled in the marriage. During one period, she suffered from depression due to the hardships of motherhood and the fact her husband’s income did not meet her perceived material needs. According to Chilean journalist Alejandra Matus in her book Doña Lucía: La biografía no autorizada, Hiriart’s home was derelict as it “was always dirty and in the bathtub of the bathroom the unwashed, soaked cloth diapers accumulated, flooding the house with a nauseating smell to which Lucía had become immune.”

When Pinochet was sent on a military mission to Quito, Ecuador in the mid 1950s, Hiriart was further hurt when she discovered that her husband was having an affair with the Ecuadorian pianist Piedad Noé.

Pinochet’s promotion to General Commander of the Santiago Army Garrison in January 1971 changed Hiriart’s fortunes. She had long pushed her husband to rub shoulders with the upper echelons of the military—often breaking military protocol—while being careful to hide his own reactionary stripes. When Hiriart’s husband was again promoted to commander-in-chief of the army on August 23, 1973 by president Allende, most accounts report Pinochet debating whether to join the coup the following month.

According to Pinochet’s own memoir, “One evening, my wife took me to the bedroom where our grandchildren were sleeping.” There, Pinochet said, Hiriart turned to him and stated: “They will be slaves because you haven’t been able to make a decision.” In 2003, according to Matus, Hiriart herself confirmed Pinochet’s anecdote.

By 1974, the coup against the Popular Unity government had succeeded, and fascism was firmly in place. For her duties as first lady and head of the charity Centro de Madres Chile (Center of Chilean Mothers, or CEMA), Hiriart organized an entire floor in the Diego Portales building where Pinochet then ruled. There, according to Matus, Hiriart had a staff of close to one hundred women, mostly volunteers, which included a press secretary, a hair stylist, a makeup artist, and a photographer. She also had a vast wardrobe of dresses, and she was known to wear several each day to different functions.

While Hiriart's public role was one of social functions and charitable acts, she was informed, and likely connected in the dictatorship's dirtier acts. Pinochet and Hiriart were interviewed together by journalist Malú Sierra for the magazine Paula in 1974. Sierra asked the couple light questions like, “What do you think may be the secret to happiness?” Sierra was then kidnapped by the Dirección de Inteligencia Nacional (Directorate of National Intelligence, DINA) and taken to the torture centre Villa Grimaldi where the journalist claims she was interrogated over the interview. By the end of the military regime in 1990, according to the Commission of Truth and Reconciliation (Rettig Report), some 40,018 Chileans had been tortured and 2,279 executed.

Hiriart is also said to have developed a friendship with Manuel Contreras who headed the DINA and would inform her of imagined or real threats. When the wives and relatives of people who were arrested or kidnapped wrote to CEMA asking for any information of their whereabouts, Lucía simply repeated explanations that Contreras provided.

Hiriart also obtained information—either from Contreras or others in the intelligence community—concerning which members of the regime were disloyal to their wives. Since she was unable to curtail Pinochet’s infidelities, other members of the regime were said to have been demoted or dismissed for theirs. Only Contreras was given a pass when he left his wife for his secretary. After the DINA assassinated Allende’s former Minister of Foreign Affairs Orlando Letelier in Washington, D.C. in 1976, Pinochet dismissed Contreras due to pressure from the United States. Displeased with Contreras’ dismissal, Hiriart left Pinochet for several weeks, the largest crisis in their marriage since his affair in Ecuador.

Throughout the remaining years of the dictatorship, Hiriart continued to head the CEMA, promoting her version of conservative Catholic values. These were in sharp contrast to those of the feminist movements that had surfaced prior to 1973 and have resurfaced even more strongly in recent years. Merging her views on politics and gender, Hiriart argued that a woman’s place was in the home and that mothers had the responsibility to provide a firm hand over their children who should grow up within the order established by the military regime.

In 2005, fifteen years after Hiriart’s husband stepped down from power, over $21 million were found in 125 accounts at Riggs Bank in Washington under a variety of aliases used by her children. That same year she was sued by Chile’s Internal Tax Service for tax evasion over $2.5 million and was arrested with her son Marco Antonio. In 2007, along with all of Pinochet’s children and 17 other people that included two generals, one of Pinochet’s ex-lawyers, and his secretary, Hiriart was arrested in relation to the Riggs case on the charges of embezzlement and use of fake passports. In October of that same year, the court of appeals ruled in favor of the general's widow and 14 other defendants while in November the Supreme Court ratified the sentence.

According to Middlesex University lecturer Francisco Dominguez, an expert on Leftist governments and Right-wing reactions in Latin America, “The Concertacion's shameful cowardice prevented Chileans from prosecuting Pinochet and indict the whole junta, and led them to turn the blind eye on the Pinochet's family, including Lucia's proven and colossal levels of corruption," he wrote in an email.

When Hiriart’s charity terminated its operations in 2019, it handed over 108 properties worth 7.6 billion pesos to the state. By this stage, a disgruntled Lucía only had three full-time staff to attend to her personal needs because the military could no longer justify her previous entourage of sixty staff members.

Commenting on Hiriart’s life in his 2002 book Wives of the Dictators, the Argentine journalist Juan Gasparini considered Hiriart narcissistic, fickle, and relatively uncultured for her position as first lady. In his view, the human rights violations committed by the Pinochet dictatorship were by no means softened with Hiriart’s presence within the regime.

After a church service on September 11, 2012, Hiriart was surrounded by angry protesters that called for her death and had to be escorted by police to safety. Since then, Hiriart rarely left her place of residency.

Recently, on December 20, Leftist candidate Gabriel Boric won the Chilean presidency by a 12 percent margin, after running on the promise of dismantling Pinochet’s neoliberal economic legacy. Just a few days before he won, Boric commented on Hiriart’s death, tweeting, “Lucía Hiriart dies in impunity despite the deep pain and division she caused our country. My respects to the victims of the dictatorship of which she was a part. I do not celebrate impunity or death, we work for justice and a dignified life, without falling into provocations or violence.”

Rodrigo Acuña is an independent writer on Latin American politics and host of ALBORADA’s Indestructible Podcast. He holds a PhD from Macquarie University. You can follow him on Twitter at @rodrigoac7.