Ecuadorians Seek Truth and Justice, While the Government Prepares a New IMF Deal

New truth and justice reports document the brute force the government unleashed against protests in October 2019, as the country prepares to vote for a new president in February. 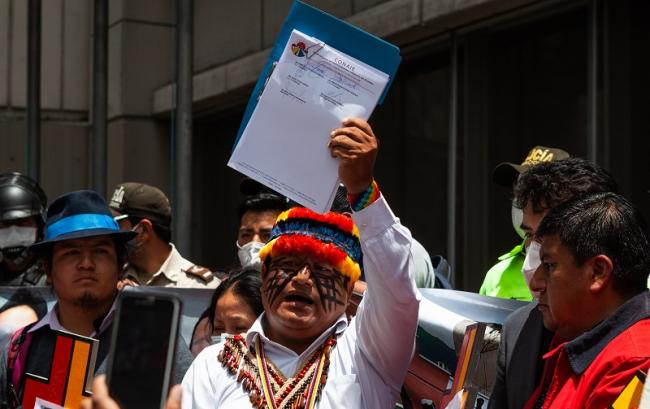 Over one year after the popular uprising of October 2019 in Ecuador, both social organizations and the national government are promoting their own interpretation of the events. How the episode will be remembered is up for debate: whether as a rebellion against an unpopular government or an affront to democracy.

Several truth and justice reports have emerged offering new perspectives of how last year’s protests will live in memory. Entities, including the Inter-American Commission on Human Rights (IACHR), have recommended that the national government investigate those responsible for the violence. Others, including the report by the Alliance of Organizations for Human Rights made up of partners like Amazon Frontlines and Extinction Rebellion, lambaste the government’s use of excessive force to repress demonstrators, escalating the situation rather than using mechanisms for a national dialogue.

In October 2019, the government of Ecuador used a presidential decree to agree with the International Monetary Fund (IMF) to cut decades-old fuel subsidies. Large-scale demonstrations engulfed Ecuador in October 2019 in response. The backlash began with transportation sector workers and then the Confederation of Indigenous Nationalities in Ecuador, or CONAIE, mobilizing their bases and converging on Quito. They forced President Lenín Moreno’s government to relocate to Guayaquil by a state of emergency decree. The country was brought to a halt for nearly two weeks. Subsequent negotiations compelled the national government into backing out of the fuel subsidy cuts.

The coronavirus pandemic has only emboldened the national government's agenda to land a deal with the IMF before February's presidential elections. A new 27-month agreement between Ecuador and the IMF was announced on September 30 for $6.5 billion, to be delivered in $2 billion increments. If the goals in the program are met, the next scheduled disbursement will be this month

As a result, Ecuadorians took to the streets in peaceful marches and sit-ins in October 2020, rejecting the current government’s policy of economic restructuring under the guise of the pandemic and the IMF agreement.

Now labelled the “month of resistance” by CONAIE and other social organizations such as the Unitary Front of Workers, known by their Spanish acronym FUT. These groups held different actions throughout October.

CONAIE held an ancestral ceremony on Indigenous People’s Day, October 12, in the Parque del Arbolito, ground zero of where police and protesters clashed a year prior, to remember the valorous acts that were made during the demonstrations.

“We are commemorating our fallen brothers,” said Piedad Ushiña of the Quitu Cara Indigenous group, describing the process of the ceremony and the importance in their culture. Participants created an Andean cross with each of the points representing the four elements: water, earth, fire, and air.

Alongside the Association of Victims of the National Strike Inocenio Tucumbi, named after an Indigenous leader killed in the protests, CONAIE then marched to the national prosecutor’s office in downtown Quito to submit a lawsuit seeking answers from the Ecuadorian government over the deaths and injuries.

For Jaime Vargas, President of CONAIE, the fight is not over. He has hinted numerous times that the Indigenous movement will return, exemplified by the near toppling of the Queen Isabel statue that day. Police eventually dispersed the crowd with tear gas. Addressing reporters at the ceremony, Vargas said, “we are people with rights, and we are going to fight for the freedom of the Ecuadorian people. That’s why we are present today to commemorate the historical actions of [last] October.”

To protest the government’s recent deal with the IMF, FUT organized a peaceful demonstration on October 22 rejecting the government’s economic reforms and high unemployment, further exacerbated by the pandemic. However, in the days leading up to the march, authorities expressed concerns that it would turn violent, prompting now former Interior Minister María Paula Romo to suggest in an October 21 press conference that the police could quell any “violence.” Organizers felt the minister preemptively labelled the demonstrators as violent, despite their repeated assurances the march would be peaceful. They said this set the stage for a heavy-handed police response.

Despite a few incidents involving protesters throwing rocks and police shooting tear gas to disperse the crowd, the demonstration remained peaceful after arriving in the Santo Domingo square. A dozen protesters danced to traditional Ecuadorian music ending the protest on a slightly higher note than what the government had anticipated.

The Alliance of Organizations for Human Rights released a truth and justice report in October. Along with the IAHCR report, it recommended that the government open investigations into those responsible for “all acts of violence committed during the protests” and respect the rights to protest and expression.

The recommendations have largely been ignored and the public officials who repressed the protests have not faced legal consequences. That was until the Minister of the Interior Romo was dismissed on November 24 for security forces using expired tear gas and the launching of tear gas into designated humanitarian and peace centers at nearby universities, an act the minister later apologized for.

The human rights alliance stated on social media before the hearing that Romo’s removal was “a necessary step towards the search for truth, justice, and reparations.”

The Alliance concluded President Lenín Moreno’s government signed a letter of intent with the IMF in March 2019 without constitutional rulings or ratification from the National Assembly, also noted in the IAHCR report for lack of citizen participation. This ultimately violated the Constitution and lead to discontent that impacted economic, social, and cultural rights.

Instead of holding a dialogue with sectors of the protest movement, Moreno’s government escalated the situation last October by using excessive force to suppress demonstrations. The report states the protests were within legitimate rights to peacefully gather over the administration's relations with the IMF.

Over a thousand people were injured and eight killed in the fray, according to the Alliance’s report. However, the total number varies between the human rights ombudsman, CONAIE, and the Ministry of Government.

Even though multiple truth reports have recommended that President Moreno’s government popularly consult with citizens before implementing vast austerity measures, Ecuador’s push to solidify ties with the IMF before the new administration enters office has continued.

The IMF describes its latest deal with Ecuador as an opportunity to “advance the structural reform agenda initiated under the previous [agreement]” through ambitious fiscal consolidation. While the new agreement allows for additional funds to stabilize the impacts of Covid-19, most likely making up for previous budget cuts in public health, austerity remains front and center. The deal calls for a lower minimum wage, higher sales taxes, labor reform, and limited public investment.

The wage bill rationalization is proposed as one mechanism to suppress wages in the agreement, claiming it would “strengthen Ecuador’s competitiveness” but “would compromise a mix of employment reduction and lower salaries.”

A temporary framework passed early in the pandemic by the National Assembly is currently being implemented “to reduce labor market rigidity.” A controversial Humanitarian Law was put into law in June, infuriating unions for its flexibility in the labor market. One of the main components allows employers to reduce work hours and weeks by equally cutting the employees pay. The law is being challenged in the Constitutional Court after 20 lawsuits have been submitted over its constitutionality.

Some members of President Moreno’s cabinet are reaping the benefits. Most recently, Former Finance Minister Richard Martínez was named Vice-President for Countries at the Inter-American Development Bank, securing an important position in Washington on November 13, and was named “Latin American Finance Minister of the Year” by GlobalMarkets. A IMF-World Bank-backed editorial boasted his achievements of paying debt instead of defaulting on international loans early in the pandemic, a move which was harshly criticized within Ecuador.

Most Ecuadorians are looking to the February election, in which the IMF will be a topic of concern, especially for the previous center-right presidential candidate and former Guayaquil banker Guillermo Lasso who has tried to distance himself from the current government. “We will clearly tell the IMF that this path they suggested is recessive, and after the pandemic, not one sensible person can think of raising taxes,” Lasso said on October 14 in a press conference, distancing himself from Moreno's commitments.

Economist Andrés Arauz is another frontrunner in the Correist party, also known as Union for Hope. He announced his candidacy as an outsider serving in Former leftist-President Correa’s government, but was absent from the inner-circle who has largely fled or has been prosecuted under Moreno. Correa currently lives in Belgium and his return to Ecuador would send him to prison for eight years under the current government.

With the worst approval rating in the region among Latin American heads of state, at 9 percent, according to Directorio Legislativo’s November report, President Moreno will be sitting the next election out.

A November poll by Ecuadorian pollster Clima Social found Arauz leading by a narrow margin of 3 points, with 13 percent of voters undecided. In a likely second round, Arauz’s margin over Lasso grows at 33.4 versus 27.7 percent with nearly the same number of unsure voters.

Ecuador’s next election is widely seen as a referendum on Moreno’s time in office. After a tumultuous period of protest, public health crisis, and economic difficulties, the election will be decisive for the next four years.

Vincent Ricci is a freelance journalist and photographer currently based in Ecuador. He covers human and Indigenous rights, social movements, and environmental issues. Follow him on Twitter at @vincent__cr.