The Long Coup in Ecuador

Elected on a progressive platform, the Moreno government has resorted to the politicization of justice and the militarization of politics to repress its former allies and constituents. 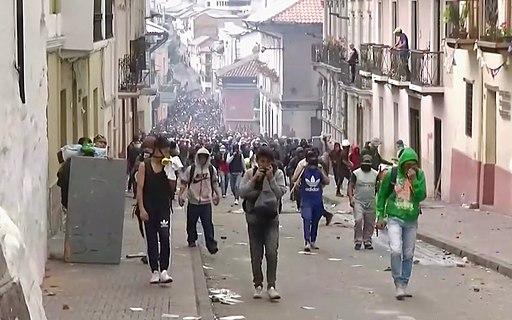 Ecuador is facing some of its darkest days. The country is trapped with a highly unpopular president who has betrayed his mandate and proved his willingness to shed blood to implement a conservative economic agenda. Last October, the Moreno government unleashed a wave of repression to stifle widespread opposition to IMF-dictated policies.

Since taking office and after forcing a split within the ruling party Alianza País, Lenín Moreno has handed the state back to the powerful left-outs of Rafael Correa’s government. He used his mandate to subvert democratic institutions, persecute the opposition, and bring back the old neoliberal model to Ecuador, all in the name of the descorreización of the country. This has gained him the support of big business, the right-wing sector, the private media, and the U.S. government, who are not willing to let him go easily.

The Rule of Unconstitutionality

The capture of the judiciary did not rid the political system of all the obstacles to a neoliberal restoration. For this reason, the agreement signed with the International Monetary Fund was riddled with unconstitutional details. Apart from contradicting domestic regulations on monetary policy and fiscal deficit, the agreement bypassed the Assembly and the Constitutional Court. This violates articles 419 and 438 of the constitution and deprives the agreement of any democratic legitimacy.

The Moreno government employed unconstitutional measures to meet the protests against the economic policies imposed by the IMF. The state of exception that the government declared on October 3 and October 8 presented a number of serious legal flaws. Most importantly, it lacked constitutional backup for four days. This legal vacuum exposed the citizenry to a worrisome state of defenselessness and gave the government leeway to crack down on the protesters.

Repression, Militarization of Politics, and Delegitimization of Protests

For 12 days, Ecuador witnessed extensive repression by state forces. Official numbers of the Ombudsman Office talk about eleven dead, 1,340 wounded, and 1,192 arrested—96 of which were below 15 years of age. Eighty percent of all detentions was said to be arbitrary and illegal. Data on missing persons was not made available.

Brutality from the police and the armed forces was systematic and widespread. Repression targeted hospitals, universities, and shelters, where children and elders were resting at night. Armed forces used live ammo, grenades, and expired tear gas bombs. Citizens have denounced torture, illegal detentions, and trials in military quarters. The night of October 11, explosions around the El Arbolito park, where the vast majority of protesters gathered, were heard all over northern Quito. The next day, the exasperated population took to the streets in all neighborhoods and the government called a curfew at 3 PM. When the protesters defied the measure, the level of state violence increased. Protesters were shot at and some reported the presence of snipers. All of this while the government insisted that it was open to dialogue.

The official narrative centered on the denial of the reasons of the protests and the normalization of state violence. The president on different occasions accused Correa, Maduro, the ELN, the FARC, and the Latin Kings—a former gang that evolved into a legalized cultural organization in Ecuador—of being behind the demonstrations in an attempt to overthrow the government. Anti-Correa propaganda was transmitted on mandatory nationwide broadcast with the double aim of reducing the protests to acts of vandalism and blaming the opposition of golpismo.

Various actors used media exposure to directly threaten the population and call for more heavy-handed use of force. Minister of Defense Oswaldo Jarrín on national television warned that the armed forces would use lethal weapons and reminded everyone that they had experience in war-like scenarios. One journalist from the TV channel Teleamazonas reinforced this narrative and asked for the use of the whole military arsenal to quash the protests.

Politicians close to the government added fuel to the fire. Former presidential candidate and banker Guillermo Lasso, defeated by Moreno in the 2017 elections, complained of the excessive softness of the police and armed forces in dealing with the protesters. Similarly, former Guayaquil mayor Jaime Nebot and current mayor Cynthia Viteri resorted to war-like racist rhetoric to call for the defense of the city from a supposed invasion.

Throughout the protests, traditional media outlets combined echoing of the official discourse with blatant censorship. The blackout on the events was near complete, and the scant coverage obscured anti-government, anti-IMF socioeconomic nature of the protests. While the country was in turmoil, TV channels offered entertainment programs. There have been various instances of journalists in the streets abruptly cutting off the interview when citizens expressed views not aligned with the government.

The government also cracked down on the few outlets detailing the protests. Public radio Pichincha Universal was pulled off-air and all its equipment was confiscated on accusations of inciting unrest. The next day, it was shut down and forced to retransmit the programming of the government’s public radio. The radio station had been denouncing harassment before. Telesur’s signal was also cut off without notice during curfew in Quito on October 12. The government had also been accused before of harassing other non-aligned outlets, such as Ecuadorinmediato.

The siege was partly broken by the excellent work of digital outlets such as Voces, Wambra, La Kolmena, KolectiVOZ, and many others, who helped disseminate information about the protests online. They are now the target of government harassment. Furthermore, the activist group critical of the government, La Kolmena, has also experienced anonymous threats. Unable to censor social media and limit the influence of independent media participation, the government appeared to engage in the disruption of mobile internet in crucial moments of the mobilizations.

The sociopolitical chaos and the ensuing truce have given the government the chance to further damage the correista opposition. Selective political persecution of the previous government began two years ago with the removal from office and incarceration of vice-president Jorge Glas through faulty process. Since then, other important figures such as Rafael Correa, former minister Ricardo Patiño, and legal adviser Alexis Mera have been put on trial with various accusations.

Hours after Moreno reached an agreement to end the protests, Paola Pabón, governor of the province of Pichincha—where Quito is located—was taken into custody. The police raided her house at dawn without court order, and she was incarcerated without any evidence supporting detention. She was later accused of supporting armed rebellion together with two assistants. The offices of the Pichincha government were also raided a few days later. The Attorney General formulated the same charges against former congressman Virgilio Hernández.

Other political figures of the opposition were detained during the mobilizations and another seven of them, including former President of the Assembly Gabriela Rivadeneira, have received asylum in the Mexican embassy.

These cases demonstrate a lack of respect for due process. The Attorney General’s office is currently tweeting pictures of the supposed evidence found in police raids in complete violation of the principle of objectivity and the presumption of innocence. Through its Twitter account, the Attorney General’s office has also announced that it is working together on these cases with the U.S. Embassy in Quito.

The activism of the Attorney General against corruption, disruption of public service, and incitement to violence has been focused on the opposition. The evidence for corruption against Moreno and the block of public transit ordered by Guayaquil mayor Cynthia Viteri have not yet led to charges.

The Government That Won’t Fall

Considering the betrayal of its mandate and massive popular rejection, it is striking how the Moreno government has managed to hang onto power. This is all the more unusual in a country like Ecuador, where—before Correa’s tenure—presidential removal was routine.

This, however, is a different story. While in the past presidents were removed largely as a result of oligarchic infighting with limited redistributive consequences, this time the oligarchy is united behind Moreno. The restoration of the old economic model benefitting the few, largely dismantled by Correa during his presidency, is now at stake.

In addition, Moreno has found an important ally in the U.S. government. The permission to use the Galapagos Islands as a U.S. military airfield, the finishing blow to UNASUR, the delivery of Julian Assange, and the agreement with the IMF were all appreciated in Washington. Most importantly, the United States knows that the return of Correa would mean losing their influence in the country.

For these reasons, Correa is still considered a threat. He is yet to be defeated at the polls and received a high level of endorsement in the last provincial and municipal elections. That is why the constitutional solution to the crisis—the so-called muerte cruzada with anticipated elections—was always available but never pursued.

Moreno is now doing the dirty work with tax waivers and reckless economic reforms accompanied by extensive repression and annihilation of correista forces. He is unlikely to run again and therefore has no political capital to safeguard. Moreno is disposable, but in the middle of this process of reform and repression, absolutely irreplaceable. His fall would mean going to elections while the extinction of correismo is far from over.

Fabio Resmini is a PhD Candidate in Political Science at the University of British Columbia in Vancouver. In his doctoral research, he examines the communication policy challenges of left-wing governments in Latin America.