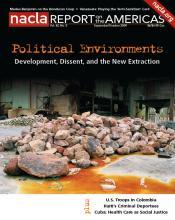 Conflicts over natural resources are on the rise in Latin America. In June, for example, at least 33 people were killed, including civilians and police, after shooting erupted at a road blockade set up near the Amazonian town of Bagua, Peru, to protest the government’s plans to ease private investment in the countryside. Such conflicts are likely to recur. Even with a global downturn in foreign investing, capital has been flowing steadily into the region’s growing mining and hydrocarbon sectors, as governments push the extraction agenda. Indeed, the presidential decrees that touched off the violence in Peru were “only the most brazen” expression of a new continent-wide push to open up frontiers to various extractive industries, as noted in this Report. As the articles in this issue make clear, conflicts in the region over natural resources occur in a variety of “political environments”—from neoliberal Peru to anti-neoliberal Bolivia. The aim of this Report is thus to showcase examples of natural resource conflicts in which development projects and environmentalism collide, in the context of the region’s “new extraction.”

U.S. Troops in Colombia: A Threat to Peace
Gregory Wilpert
In August, a deal was announced in which the U.S. military will be granted the use of five military bases in Colombia, in addition to the two it already uses, to fight drug trafficking and guerrillas. The increased U.S. military presence will likely exacerbate tensions between Colombia and its neighbors.

The Honduran Coup: The Specter of Democracy, and of the Past
Medea Benjamin
Soon after Honduran president Manuel Zelaya was deposed, the country’s elite declared Honduras safe for democracy. Yet the nonbinding poll he had called represented a push, coming from the grassroots, to transform Honduras from merely an electoral to a participatory democracy.

No Mercy: Haitian Criminal Deportees
Amy Bracken
In April, the U.S. Immigration and Customs Enforcement (ICE) agency recommenced the forcible deportation of Haitians, which was suspended on humanitarian grounds after Haiti was devastated by storms in August 2008. As of July, more than 450 Haitians had been deported, 363 of them with criminal convictions, and at least 29,000 more were slated for removal. For those once locked up in the United States, freedom can be an exciting prospect. But liberation in Haiti also means “freedom” from guarantees like food, shelter, clean water, and health care.

Bajo fuego: Acción Ecológica de Ecuador
Paul Dosh y Nicole Kligerman. Traducido por César Flores Unzaga
Battle in Bahia: A New Port Faces Growing Resistance
Colleen Scanlan Lyons
In the last year, diverse communities and organizations in the southern region of Bahia, Brazil, have joined together in an unprecedented show of cross-movement solidarity against a government-supported infrastructure project known as Porto Sul. The project poses a threat to sensitive forestland and water resources, as well as locally defined plans for development through ecotourism.
Bolivia’s Dilemma: Development Confronts the Legacy of Extraction
Linda Farthing
The social pressure to satisfy Bolivia’s immediate economic needs through extractive industries remains as strong as ever. If the Evo Morales government can move beyond rhetoric to significant action in favor of the environment, it will be an impressive accomplishment.
Confronting Goldcorp: An Interview With a Guatemalan Activist
James Rodríguez
In May, independent photojournalist James Rodríguez interviewed Guatemalan grassroots leader Gregoria Crisanta Pérez during a march on the Canadian Embassy.Pérez has been accused by the Canadian mining company Goldcorp of sabotaging its electric lines.
Correa vs. movimientos sociales: conflicto en Ecuador
Paul Dosh y Nicole Kligerman. Traducido por César Flores Unzaga
Correa vs. Social Movements: Showdown in Ecuador
Paul Dosh and Nicole Kligerman
Although the passing of Ecuador’s new constitution represented a moment of unity between popular movements and the electoral left, they have clashed recently over the question of environment protection—showing that they are hardly synonymous and sometimes not even allies.
Fish, Wildlife, and Bombs: The Struggle to Clean Up Vieques
Katherine T. McCaffrey
Cleaning up Vieques Island, Puerto Rico, contaminated by decades of the U.S. Navy’s training exercises, has become the focal point of residents’ efforts to reclaim their home. But it has been stymied by the former base land’s designation as a wildlife refuge under the control of the U.S. Department of Fish and Wildlife.
The New Extraction: Rewriting the Political Ecology of the Andes?
Anthony Bebbington
In June, Peruvian president Alan García’s decrees easing private investment in the countryside triggered a violent confrontation with indigenous people. The decrees were only the most brazen expression of a new continent-wide push to open up frontiers to various extractive industries. As different Andean governments promote extraction, they show little sympathy for those who question such policies. Dissent, however, is not going away.
Under Fire: Ecuador’s Acción Ecológica
Paul Dosh and Nicole Kligerman

Playing the ‘Anti-Semitism’ Card Against Venezuela
Eric Wingerter and Justin Delacour
The U.S. press tends to portray left-leaning Latin American governments as hotbeds of anti-Semitism. In the case of Venezuela, this storyline has been promoted in three key ways: (1) attributing anti-Semitic acts or statements by private citizens to the government, (2) conflating legitimate criticism of Israeli policy with anti-Semitism, and (3) relying on press statements by U.S.-based Jewish organizations at the expense of Venezuelan Jewish organizations.