Throughout Chile’s constitutional process, right-wing rhetoric has rejected Indigenous recognitions and representation in defense of the status quo. 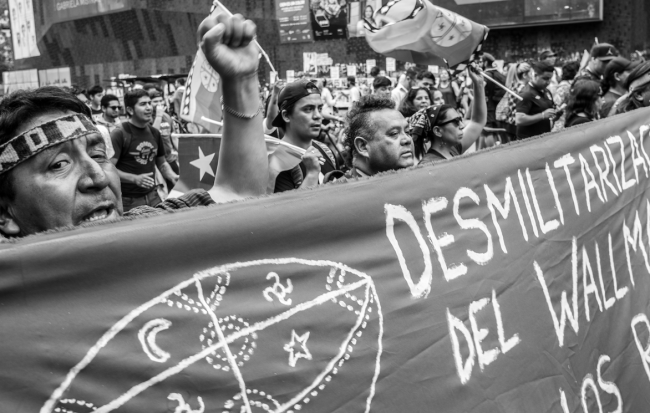 Beginning in October 2019, the Mapuche flag became a regular fixture at the mass protests known as the estallido social across Chile. In multiple cities, demonstrators toppled statues of colonizers, rejecting the symbols of centuries of colonialism and oppression. Since the uprising, Indigenous rights have become an increasingly prominent part of Chilean political conversations. When 155 delegates began drafting a new constitution in 2021, 17 were Indigenous representatives, and Mapuche scholar Elisa Loncon served as president of the Constitutional Convention for the first six months. Together with other representatives, their work led to the inclusion of many Indigenous rights and recognitions in the draft constitution.

In a plebiscite on September 4, 2022, 62 percent of voters rejected the draft constitution. According to a poll by Cadem carried out days after the vote, plurinationalism and Indigenous autonomy were the second most referenced reason for voting “Rechazo” (reject); 35 percent of survey respondents listed it as one of their reasons, and 16 percent mentioned it first.

Indigenous rights, and particularly plurinationalism, figured prominently in analyses of the plebiscite result. In the wake of the vote, right-wing politicians and those in the Rechazo camp repeated campaign language that implied that a vote against the draft constitution was a vote against Indigenous rights: “Chile is one,” “Thank you for defending Chile,” and “We want peace.” Right-wing former presidential candidate José Antonio Kast said the plebiscite highlighted the “failure” of current President Gabriel Boric’s government and called on the administration to “stop the advance of terrorism and violence in rural areas, in Arauco, Araucanía, and the north.” Deflecting from addressing rights recognitions and Indigenous demands, this strategic language called for immediate responses to concerns about insecurity, selectively naming locations many Chileans would associate with the so-called “Mapuche conflict” in the south (and with migrants in the north).

Boric, for his part, called in a speech on September 4 for building on existing consensus around women’s and children’s rights; Indigenous rights were noticeably absent from this call to action. Two phrases implicitly communicated that the government would move forward with a muddled approach to Indigenous rights. First, in a passage reminiscent of “Chile is one” rhetoric from those opposing the constitution, Boric said: “We … know that we have one culture, traditions, and symbols that we must respect and honor.” Then, discussing the government’s “obligation to meet the demands of our compatriots in their daily lives,” Boric listed “insecurity” and “violence in the south” as areas where Chileans “expect strong answers and solutions.” While ambiguous, these statements suggested to voters that the government would significantly scale back their work to promote Indigenous rights recognitions to appease concerns about division and security.

Snapshots of Chilean history from 2019 to 2022 reveal two concerning trends in how Chilean political elites justify their opposition to Indigenous rights and demands. First, critics equate Indigenous rights recognitions with the absence of the state and explicitly link recognizing rights to preventing the state from responding to security concerns. This logic calls for prioritizing security claims over rights demands. Second, critics frame Indigenous rights as antidemocratic. They claim Indigenous rights recognitions violate the principle of one person, one vote by denying the will of voters who elect politicians whose platforms call for strong policing to address insecurity attributed to Indigenous activists, as in the case of recent right-wing platforms calling for militarization in southern Chile.

Both arguments leverage the language of stability, peace, democracy, and development within the power and structure of the existing state to oppose Indigenous rights recognitions. The Rechazo campaign capitalized on these arguments, activating underlying insecurities among non-Indigenous Chileans. Of course, the inability of the existing Chilean model of inequality and exclusion to respond to citizen demands was a root cause of the 2019 uprising. First in the streets and then at the ballot box—in the October 25, 2020 vote overwhelmingly in favor of drafting a new constitution as well as in the 2021 presidential election—many Chileans have expressed that reforms are not enough. Concerningly, however, arguments to preserve the existing model of Chilean governance gain traction when discriminatorily deployed in opposition to Indigenous rights.

As protests continued in late 2019, politicians negotiated a possible process of rewriting the constitution. A November agreement ensured that the body charged with drafting the new charter would have gender parity, but Indigenous representation remained unaddressed. After a year of debate, Law 21.298 established that 17 of the 155 seats in the Constitutional Convention would be reserved for Indigenous representatives, relatively matching the percentage of Chileans who identify as Indigenous. This agreement was reached in December 2020, after nearly 80 percent of Chileans voted in October 2020 in favor of rewriting the constitution via a Constitutional Convention.

The legislative debates over this law previewed the misunderstandings about and opposition to Indigenous rights that later appeared in the run-up to the September 4 plebiscite. Right-wing representatives framed the reserved seats as antidemocratic, claiming that recognition of collective rights would come at the expense of individual rights. The right-wing Renovación Nacional (RN) party went so far as to equate reserved seats with appointed senators, a legacy of General Augusto Pinochet’s dictatorship that remained in place until 2005. Opposing the legislation, Senator Jacqueline van Rysselberghe of the right-wing Unión Demócrata Independiente (UDI) argued: “I deeply believe in representative democracy, and I believe that everyone’s vote is worth the same. Therefore, generating reserved seats for different groups, however valuable they may be, seems to me to distort that.” She later made headlines for claiming that if Indigenous groups would have reserved seats, so too should other “interest groups,” such as Christian communities.

Right-wing politicians frequently approached Indigenous rights conversations with a protectionist logic, framing Indigenous representation as compensating for prior wrongs. Senator Francisco Chahuán of RN said: “We have an outstanding debt, and we have to start paying it.” Framing Indigenous rights through this logic of payment and compensation situates Indigenous discrimination and exclusion in the past, as finite, and as possible for the existing state to resolve in the present. And while the state management of Indigenous identity rejects international standards of self-identification, many politicians called for the state to define, manage, and oversee which Indigenous communities would have reserved seats, who could run for those seats, and who could vote for those candidates. In an article for the Center for Investigative Journalism (CIPER), Antonia Rivas Palma, a lawyer, academic, and adviser to the Constitutional Convention on Indigenous rights, critiqued this state control: “The strategy was to only recognize the ‘authentic’ Indigenous, who is not mixed nor has migrated to the city; one who does not belong to the modern world and therefore complies with the stereotypes that those of us who are not Indigenous have about how an Indigenous person should be.”

In contrast, Indigenous rights activists, policy experts, and many left-wing legislators spoke of reserved seats as a power-sharing measure that would support the broadening and strengthening of democracy. This position suggested an ongoing, active commitment to the recognition and exercise of Indigenous rights as integral to the larger project of undoing and remaking democracy. In justifying his vote in favor of the legislation, Senator Francisco Huenchumilla, a prominent Mapuche politician of the center-left Partido Demócrata Cristiano (PDC) noted that reserved seats would ensure the Constitutional Convention process “had a high degree of legitimacy through the participation of the different sectors that make up our pluralistic and diverse Chilean society.”

Kelly Bauer is Associate Professor of Political Science at Nebraska Wesleyan University and a member of the Red De Politólogas – #NoSinMujeres. Her recent book analyzed how Chilean governments responded to Mapuche territorial demands through land policy.