Fighting for Food Sovereignty in Guatemala

The rising costs of consumer goods has stoked the country’s peasant movement. 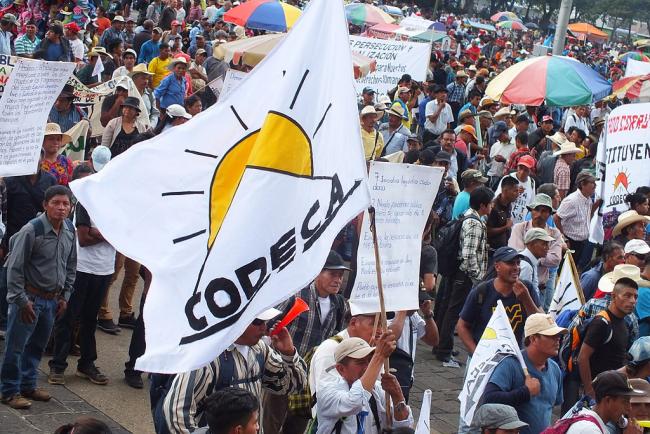 On April 26 and 27, Guatemalans demonstrated throughout the country, blocking roads and demanding an end to high food and fuel prices, as well as calling for government accountability and the resignation of President Alejandro Giammattei. Protesters carried signs stating “we are the generation that will no longer remain quiet before injustice,” and “if there is no justice for the people, there will be no peace for the government.” Above all, the Paro Multinacional (multinational strike), organized by the Comité de Desarrollo Campesino (Campesino Development Committee, CODECA), demands that the Guatemalan government give voice and recognition to the country’s more than 24 Indigenous nations. A member of CODECA, who preferred not to be named to emphasize the collective nature of the group, claimed that the organization’s fight is one of the right to territory, which goes beyond land and encompasses the right to resources, culture, and history. “It is about more than land to harvest,” he stated, “it is about the people who inhabit it and, above all, the natural resources, which is what the Indigenous communities in Guatemala protect.”

Over the last few years, food prices in Guatemala have risen as a result of factors related to the Covid-19 pandemic and the Russian invasion of Ukraine. In 2021, the cost of corn and beans rose by 25 and 34 percent, respectively, and prices are only expected to get higher. These issues exacerbate a decades-long increase in food prices resulting from inequality in access to land and an emphasis on export crops over food staples. Due to the dominance of government-supported major agricultural businesses, Guatemalans are forced to pay import prices for food that was once grown domestically. Because most Indigenous Guatemalans do not make a wage that covers these costs, the issue of how land is used and by whom has greater urgency. The minimum wage for agricultural workers is Q2,872.55, yet as of February 2022, the cost of the basic basket—the minimum amount of food needed to sustain a family of five—was Q3,134.40.

According to CODECA, the Giammettei administration has aggressively combated the peasant occupation of territorial lands, burning the homes and belongings of communities it refers to as “invaders.” This process is referred to as “cleaning,” and the land is ultimately given to large landowners. In the last three years, according to the CODECA member, 23 activists in the movement for territory have been murdered, and there have been 270 cases in which activists have been criminalized for their activities.

State Violence and Rights to Territory

Land and territory have long been central to the rights of Indigenous Guatemalans. In 1954, a CIA-sponsored coup overthrew the democratically elected President Jacobo Árbenz, who intended to redistribute unused land owned by the United Fruit Company to landless peasants. A long period of state-sponsored brutality followed, leading to a 36-year long civil conflict in which over 200,000 individuals were killed and nearly one million more displaced, the majority of them Maya. According to the 1998 report "Nunca Más," the post-conflict truth commission published by the Catholic Church, over 90 percent of the atrocities were carried out by the Guatemalan military or the associated paramilitary Civil Defense Patrols (PACs).

The legacy of the conflict deeply impacts Indigenous Guatemalans' contemporary struggle for territorial rights. Historical demands for land were met with such brutality that many fear being associated with a leftist insurgency. Indeed, a common governmental tactic has been to label ongoing movements for transparency and against corruption as such. As Paula Flores Arroyave, who was member of CODECA and other Guatemalan Indigenous movements for years but now lives abroad, stated: “with the post-war context, civil society in general was very afraid of speaking out, of being repressed, of being disappeared.” This has made it difficult for a continuous movement to emerge. While the government has, in theory, complied with the peace accords by resettling some campesinos who were impacted by the conflict, the land can rarely be used to sustain themselves and their communities. “In the end,” Flores Arroyave continues, “who does the peace accord serve?”

Now, the current government is striving to expand its export commodities, such as sugarcane and African palm oil. President Giammettei claims that the crops are key to reducing poverty. However, for Indigenous Guatemalans, large agricultural businesses are among the primary drivers of inequality and food insecurity. Monoculture plantations occupy much of the country’s most cultivable land, meaning that there is little opportunity for campesinos to practice milpa, a self-sustaining agricultural practice that has historically been used by Indigenous Maya. Through this method, staple crops such as beans and corn are cultivated simultaneously. Farming subsistence oriented crops through milpa is a way to sustainably feed families and communities, while also contributing to global food stability through the organic maintenance of crop diversity. Monocultural farming, on the other hand, lessens soil fertility while contributing to deforestation.

Due to the lack of fertile land for small farmers, many Indigenous Guatemalans are forced to work on monoculture plantations for meager wages. Even before rising food prices, the minimum wage for agricultural workers did not cover the basic basket. According to a report produced by CODECA, the minimum wage law is frequently ignored, with only 10 percent of agricultural workers earning this amount. For many employees, the end of their workday is contingent upon completing a specific amount of labor, which is quantifiably measured dependent upon the crop. This means that employees frequently enlist the help of their children and rarely work less than 10 hours per day.

During her time working with an agricultural community in Guatemala’s south, Flores Arroyave noted the severe human rights abuses that occurred. Landowners sprayed chemicals on their crops from helicopters without providing employees in the fields with the proper protective gear; chemicals damaged their skin and their lungs. With sugarcane crops, burning the fields before harvest is a common agricultural practice in Guatemala, but one that leads to significant air pollution and health issues. The ash in the air is often so thick that community members cannot wash or dry their clothing outside.

As part of the peace accords signed in 1996, some campesinos were entitled to land transfers and food assistance. But often the provided land had become unusable due to past over-farming and contaminated soil. Some campesinos occupy land but do not have certificates of ownership, making eviction an ever-present threat. While small farmers occasionally rent the land from large landowners, exclusionary conditions and financial limitations make this difficult. Landlords are less likely to rent land to families using it to sustainably produce food because it does not yield a substantial profit. Due to the demand for land, landlords frequently rent at inflated prices, forcing campesinos into a pattern of debt.

CODECA has been gaining support beyond its typical Indigenous and campesino base, achieving an ideological following from urban communities, students, and even the middle class. According to Flores Arroyave, this is due to a widening frustration with the political class: “The politicians are robbing us, are looting the country, and we can see how they have started to steal more brazenly, to repress us.” It is likely that, as prices continue to rise and government corruption grows more apparent, mobilizations will only continue. Citizens are realizing, more and more, that protest is, as Flores Arroyave states, a “valid path, and not only valid, but necessary, because otherwise, nobody would listen to us.”

As the CODECA member explains, last month’s demonstrations were ultimately about the fight for food sovereignty, or the right to cultivate and consume food produced through traditional, Indigenous methods. In this case, the right to the land is intimately tied to deepening poverty and the fact that many in Guatemala do not have the right to cultivate their own food during times of global scarcity. Instead, they are forced to pay ever higher prices for basic foods they have long demanded to grow themselves.

“The people in the countryside, the campesinos and Indigenous people, they live on what they sow,” said the CODECA member. “If the campesinos have their needs met, they will not only have the will, but also the space and the possibility to strengthen their struggles.”

Chelsea Carrick is a freelance writer based in Mexico City. She holds a Master's Degree in Political Science from the CUNY Graduate Center, where she focused on post-conflict politics in Latin America.