Mexican protesters share the story of illegal detentions in the aftermath of a police killing. 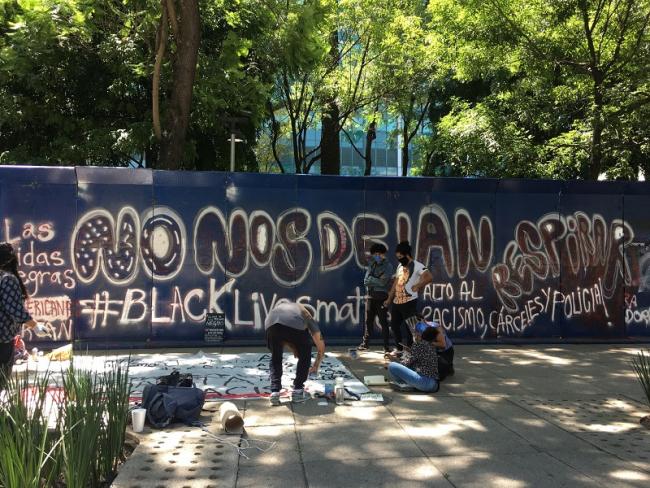 Paco and Tania, whose names have been changed, still do not know what happened to them that night. It was Friday, June 5 when hooded people carrying improvised weapons seized the couple, along with dozens of others, off the streets of Guadalajara, Jalisco. Most of those detained were students and young people in their teens and twenties, on their way to a protest against police brutality. The masked interlopers took them to the state prosecutor’s office, where they were illegally held for hours.

The mass disappearance sent horror through Mexicans all too familiar with this kind of targeting, like the 2014 disappearance of the 43 students from the teachers college in Ayotzinapa, Guerrero. Reports indicate that all those illegally detained that night, and others attending protests the the nights of June 4 and 6, were released. The Jalisco-based human rights organization Centro de Justicia para la Paz y el Desarollo, A.C (Justice Center for Peace and Development, CEPAD) estimates that at least 90 people were detained, though they acknowledge it may have been more. Some, like Paco and Tania, have filed criminal reports. Others, facing threats and harassment, have desisted. The incident has brought local and national attention to human rights violations committed by the Jalisco police.

Late on the afternoon of June 5, Paco and Tania biked to join the second night of anti-police brutality protests in Guadalajara. News had broken of the death of Giovanni López, a bricklayer killed by police a month before for not wearing a face mask, just as massive Black Lives Matter protests were beginning in the United States. In Guadalajara and throughout Mexico, protesters turned out in the names of both George Floyd and Giovanni López. The couple had been working on a research project about political protests, so they decided to attend the demonstration outside the Jalisco State Prosecutor’s Office (FGE), as participant-observers.

The two traveled light through the scorching Guadalajara afternoon, with only their bikes, bike locks, and cell phones. As they traversed the low-slung industrial neighborhood near the Prosecutor’s Office, they saw a white van at a distance. People with hoods seemed to be forcibly taking a girl and a boy in their late teens. The girl cried out for help.

Paco approached the hooded people and asked them why they were taking her. One of the men told him not to interfere, and that if he did not leave, they’d take him too.

Moments later, three more trucks arrived. More hooded figures disembarked, carrying pipes, hammers, and ax handles. Some wore police badges, while others barely concealed them. Most wore bulletproof vests and carried handcuffs. Someone grabbed Paco from behind and another hit him in the nose. They knocked him onto the ground and beat him.

Tania tried to record what was going on, but she noticed the hooded people were watching. A man approached and demanded she turn over her cell phone. She refused, and she was forced into a navy-blue pickup truck.

Meanwhile, the hooded people continued to beat Paco. They handcuffed him and placed him face-down in a separate truck. “This one’s getting fucked over for sedition,” he heard one say.

Two women in plain clothes shared the truck with Tania, their faces covered, both holding makeshift weapons. As the truck drove, the women pointed out groups of protesters along the road to target.

Both trucks arrived separately at the state attorney general’s office. A man helped Tania down from the truck and led her into a patio with two cells. The area was full of kidnapped young people, she says, some of whom were being brutally beaten. She was led into a cell with about 20 others; she was frisked and handed over her phone to be checked.

Paco arrived separately, along with two other vehicles full of people. As the victims got out of the vehicles, their captors yelled and insulted them. Paco was led into the same patio, which he says was full of people with badges of investigative police and ministerial police. Some had their badges covered by their bulletproof vests. He was relieved to notice Tania in one of the cells, and he was led into the other. Next to him stood a terrified teenager with a bloody nose. Paco could hear people being beaten; he heard some people crying.

“If you don’t shut up, we’ll cut you into pieces,” Paco remembers the police yelling. “Nowadays it’s really easy to do that and disappear you and no one will find out.”

At some point, Paco remembers, a man who seemed to be a high-ranking official entered the patio. He told the captives that this was happening because a police officer had suffered burns in the protest the previous day. He emphasized that the captives were not being arrested, and that if they did not misbehave, they would be released.

After a while, Paco and Tania noticed that the captors began to take people away in vans. They were told that they would be able to go. Paco asked for his belongings but was refused.

Tania was loaded into a truck with a group of women, accompanied by two police officers. As they drove, the police officers threatened to leave the women far from the city. Eventually, though, the officers told the women they would let them out two by two. Tania and one other woman were the first to be released.

After Tania was taken away, Paco was loaded into a van with several other men. A group of men with their faces covered climbed in after them.

The men continued threatening Paco and the other captives. “They told us that if we did anything, ‘they were going to do something really bad with us,’” Paco recounts. “That they already know who we were, and they could identify us.”

After about an hour, Paco and the other captives were thrown out of the van in an alleyway in the south of the city.

Until mid-afternoon the following day, lists of names circulated on social media of victims who had not been located. Anna Karolina Chimiak, the director of CEPAD, the Jalisco-based human rights organization, says the following days were characterized by uncertainty. “The principal problem in those days was the lack of public information about the magnitude of the acts that occurred, and the number of people detained and disappeared,” she says. “One of our main tasks was to create a registry, along with other human rights organizations, which we updated in real time with information about the people who were disappeared.”

Almost immediately, Jalisco governor Enrique Alfaro publicly condemned the use of force by police. He claimed that the police officers involved in the illegal arrests had been acting under orders from organized crime.

To Chimiak, the occurrences on June 4, 5, and 6 demonstrate the weakness of the government’s ability to guarantee rights. Recent memory in Jalisco is replete with incidents of abuse by security forces, including the murder of Giovannii López. She notes that public officials have a long history of blaming external actors for abuses by state forces. “It’s been a practice for many years, even more in recent years, when they tend to blame organized crime for serious violations,” she says, “and the government tries to wash its hands and avoid responsibility.” An exhaustive, independent investigation is necessary to determine what happened on June 4, 5, and 6.

Regardless of whether the police officers were obeying internal or external orders, she notes, the state’s inability to assure basic rights is deeply concerning. “It’s very serious that the government itself recognizes the lack of control over the prosecutor’s office,” she says. The case is now in the hands of the federal prosecutor.

On July 9, the Jalisco Human Rights Commission began a series of five dialogue sessions with some of the victims, most of whom were young people or students. Representatives from the state government, the state prosecutor, student activist groups, and university worker groups also participated.

Paco says that the attendance of victims varied. “Sometimes there would be eight, sometimes 12, sometimes 10,” he remembers, a small fraction of the number of those detained that night.  “We were all really scared… We found out about many who were victims but didn’t even want to make a report in the Human Rights Commission.” Some victims’ families, he says, have received harassment and threats over the phone.

In the weeks since the incident, some of the victims have formed a collective, Somos 456, in reference to the protests on June 4, 5, and 6. They have struggled to develop a cohesive analysis. “We’ve talked about it a lot, and we’re still not really sure what happened to us,” Paco says. The police officers came prepared with the hooded faces and ad-hoc weapons typically ascribed to shock groups infiltrating protests. The simplest explanation, according to Paco, is that “The FGE worked as a shock group against us, although the state will not recognize it.”

In the weeks since, 14 officers who were presumed to have been involved in the illegal arrests have been suspended. To Paco, though, the magnitude of the operation troubles the state’s story of bad actors. “When we were in the prosecutor’s building, there was a lot of movement, people around,” Paco says. “More than 60 to 100 people were kidnapped. Sixty to 100 people were involved in disappearing us.” Paco points out to coordinate the operation, arrest, and hold so many people in the very heart of the state justice system’s headquarters would be hard to pull off without official sanction.

After meeting with some of the victims in late July, Jalisco governor Enrique Alfaro announced he would promote reforms to police forces in order to prevent the repetition of such incidents. The government is hosting a series of virtual forums, the first one held on August 15, with victims, human rights experts, and authorities to develop proposals for justice system reform.

Anna Chimiak of CEPAD was one of the experts to present at the virtual forum. In her speech, she called for the state to recognize and create legal frameworks around torture and disappearance, rather than considering them as mere abuses. She also called for the creation of better investigation methods and accountability mechanisms.

Paco says that the victims who have self-organized would like to know what really happened. “We want the right to the truth, we want to know what happened, who gave the order,” he says.

They are asking for reparations of damages, including the replacement of physical property that was taken that night, like Paco’s bike and many victims’ cell phones, and psychological and medical treatment for injuries sustained. Paco, for instance, will soon have surgery for his nose fractured that night. Above all, they demand the right of non-repetition. “This cannot be repeated again in future generations,” he says.