U.S. Archeologist Seeks to Privatize Maya Historic Sites in the Name of Conservation 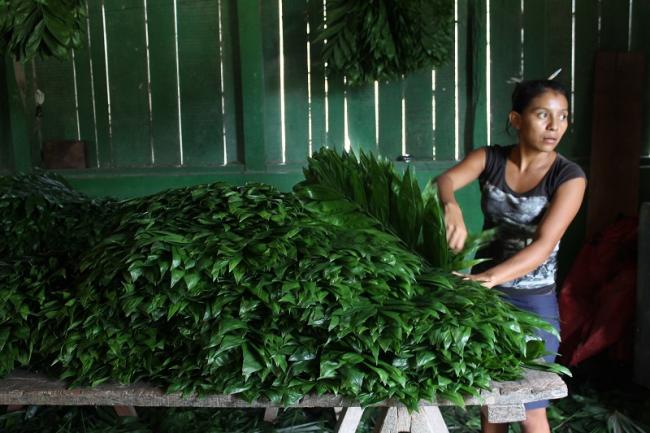 A proposed bill in the United States Senate has communities and experts concerned in Guatemala. The bill highlights the ongoing threat that misguided archaeological and conservation schemes pose to forest communities in Guatemala.

El Mirador is a remote national park at the furthest northern point of the Guatemalan department of Petén, deep in the tropical jungles of the Maya Biosphere Reserve. It is one of hundreds of pre-classical Maya cities in the Petén. It is considered one of the largest complexes in the region, along with the nearby Nakbe and La Florida historical sites, with structures that tower above the jungle canopy. They are said to rival nearby Tikal in their grandeur.

The region is rich in biodiversity, with thousands of unique species of plants and animals, including jaguars, a dozen species of parrots, and other animals on the verge of extinction.

Richard Hansen, an archeologist from Utah who has worked in El Mirador for over 40 years, wrote Bill S.3131. Hansen’s proposal is the latest green land grab in the name of conservation, which does not take into account current efforts in the region to protect the rainforest. Community leaders and scientists have spoken in favor of existing community forestry initiatives in Petén, contesting Hansen’s claim that his tourism development project would better protect the forest.

Hansen has argued that the forests are “unprotected,” threatened by illegal logging, drug trafficking, and deforestation. But the forests have protectors: the communities with concessions from the Guatemalan government. The proposal represents Hansen’s latest attack on the land rights of communities living within the Maya Biosphere, especially the village of Carmelita, which sits closest to the El Mirador historic site and has successfully protected the surrounding forest.

“For years [Hansen] has been against what the Carmelita Cooperative has done. He has criticized the cooperative and the [forest] concessions,” says Maynor Zapata, a community leader from Carmelita. “It is a sad history.”

The bill came as a surprise to the Guatemalan archeological community. “We were all surprised by this proposal,” says Dr. Ernesto Arredondo, Sub-director of the Guatemalan Archaeology Association, and investigator and professor of archaeology at the De Valle University of Guatemala. “But this is a problem that has been going on for 20 years.”

This is not the first time that Hansen has sought legislation that would give him more control over the archeological site and region. Hansen has grown close to the Guatemalan economic and political elite. Since 2000, he has made at least four attempts to get legislation passed that would impact the region and annul the concessions. One proposal during the administration of Alfonos Portillo (2000-2004) was taken to the Guatemalan Constitutional Court, which ruled against his development project as unconstitutional. 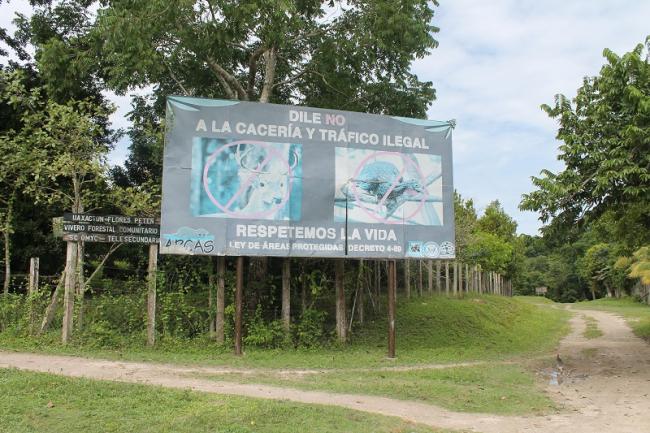 The proposal has been denounced by not only the communities, but Guatemalan archeologists, conservationists, and public officials, especially as it bypasses official channels to develop such initiatives.

“This country has a constitution, laws, and norms. They should respect the laws,” says Salvador López, an archeologist who served as the Director of Heritage and Culture in the administration of Oscar Berger (2004-2008). “The Ministry of Culture and Sports is the one who is charged with conservation and protection of archaeological sites and parks and who approves all investigations in the country. All national and international archaeologists must respect this.”

He adds that in Guatemala, “[Hansen] is only authorized to carry out investigation, nothing more.”

While Hansen has become an internationally known “expert” on the pre-classical era of the Maya, consulting on the Mel Gibson movie Apocalypto and appearing on many TV shows, he is a controversial figure in Guatemala. Many Guatemalan archeologists reject Hansen's findings and accuse him of racism. Added to this, both López and Arredondo point out that the proposed bill contains numerous factual errors that are not generally agreed upon in the academic circles, including Hansen's assertion that the Maya Biosphere Reserve is a basin.

“Today the consensus is that there is no basin,” Arredondo says. “There are lowlands, but it cannot be considered a basin.”

The Protectors of the Forests

At the core of the criticisms of the proposed U.S. Senate bill is that Hansen’s efforts look to undo community conservation efforts that have proven to be successful in the biosphere.

Carmelita is one of 11 communities within the Maya Biosphere with 25-year forest concessions from the Guatemalan government. The community is the closest to El Mirador and has lived from the jungle since it was first founded in the 1920s, says Zapata.

“The jungle to us is everything,” Zapata says. “We have lived for nearly 100 years from its renewable resources.”

Carmelita is the northernmost village in the middle of the biosphere reserve that is made of a variety of micro-climates. Take 50 steps and the surrounding micro-climate changes. The communities with concessions live from the products of the jungle, including the responsible harvesting of tropical woods, latex, and other products. All the while they protect the vast biodiversity of the region through sustainable management plans.

Through the 1960s and 1970s the communities that lived within what is today the Maya Biosphere negotiated timber concessions to maintain their way of life. This was especially important when, beginning in the 1970s, the Guatemalan government launched a campaign to colonize the Petén as a means of relieving the country’s land problem. 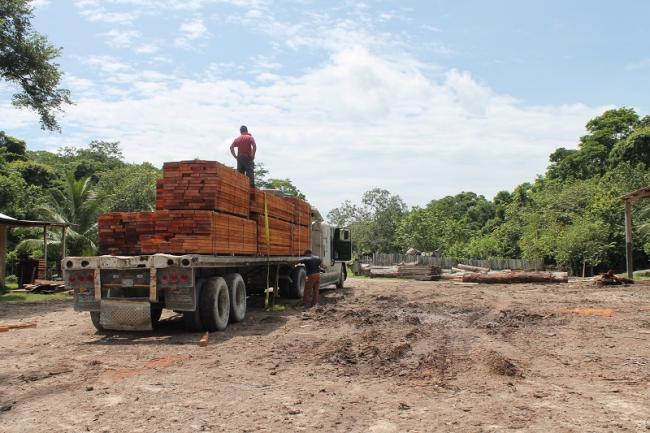 When the Maya Biosphere Reserve was created in 1990, the communities protested for the establishment of the forest concessions so that they could continue their way of life, relying on the products of the jungle. By 1998, the Ladino community, a term commonly used for Guatemalans of European descent, of Carmelita was issued a concession totaling nearly 133,436.91 acres of the biosphere by the National Council for Protected Areas, known as CONAP. The project also included funding from the United States Agency for International Development

The concessions ushered in the communal management of the jungle. And after 25 years, the jungle has seen a far lower rate of deforestation than other parts of the country. The community is dedicated to protecting the forests, especially as other regions, including the Laguna de Tigre region to the west, have been devastated by the expansion of the production of African oil palm, cattle ranching, and oil production.

Hansen has accused the community of being responsible for deforestation and for other crimes, but the evidence has shown that the region has maintained forest cover and has suffered fewer forest fires. The community’s proximity to El Mirador has provided the opportunity to develop tourism, which assists in their protection of the jungle.

Senator Tim Kaine (D-VA), who serves on the Senate Foreign Relations committee, was contacted for comment, but was unavailable.

“He should respect what we are doing,” Zapata says, referring to Hansen. “He is a foreigner. I cannot go to the United States and say what they should do. That is what he is doing here.”

The proposal of S.3131 represents the struggle in Guatemala over who controls development strategies. This is the latest front in a battle between top-down and bottom-up models of development.

“How are we going to carry out tourism development in the Mirador park?” asks López, the archeologist. “Will it be a sustainable tourism development that includes the communities? Carmelita has been there for over 100 years.  They have experience, they’ve been trained, they are in charge [of the site]. You cannot change something by law that the Guatemalan state has established.”

Carmelita’s proximity to El Mirador has provided the community with a means of development. Beginning in 2013, the community began to organize a tourism cooperative to provide guided expeditions to the historical site. Since 2015, the community has operated a cooperative tourism center on the heavily-touristed Island of Flores, which is a jumping off point for historic sites across Northern Petén, including the famous Tikal site. The center has attracted more people into the community.

Zapata, the community leader, estimates that today at least 90 percent of the community benefits directly from the tourism that they themselves developed. This includes guides, cooks, and those who rent equipment and animals for the journey to Mirador. At least 40 young residents have obtained degrees in tourism to improve the quality of the experience for those who trek through the jungle to El Mirador.

Hansen has long been a critic of the community’s efforts, and according to Zapata, has stoked divisions within the community.

“He was part of the problem in the community,” Zapata says. “He strengthened a small group that didn’t allow us to operate an organized tourism where the benefit was for the majority of the community. But he called [this alternative] ‘community tourism’.”

The proposed bill would create an industrial form of tourism that bypasses the community’s conservation efforts and local tourism initiatives.

“The advantage that Hansen has is that he has support from the economic elite,” López says. “He has sold them the tourism project in El Mirador. It is the control of territory; to carry out tourism development projects for the elite, to build their grand hotels. For the communities, they will just be seeing the tourists pass by without the benefits.”

For the affected communities, the stakes of development are high. Local economic development allows them to remain on their historic lands. Otherwise, they may be forced to migrate to Guatemala’s cities or the United States to survive. Hansen’s intentions for the region threaten communities like La Carmelita that have proven locally led conservation and forest management programs are effective.

“We know that El Mirador has to develop, but they have not taken into account our community development,” Zapata says. “What good will it be if we don’t have work in Carmelita? We would have to search for new horizons in the United States.”

Jeff Abbott is a freelance journalist based in Guatemala. He covers social movements, human rights, and politics in Latin America. You can follow him at @palabrasdeabajo.