To Save Haitian Lives, Global Health Leaders Call for Solidarity 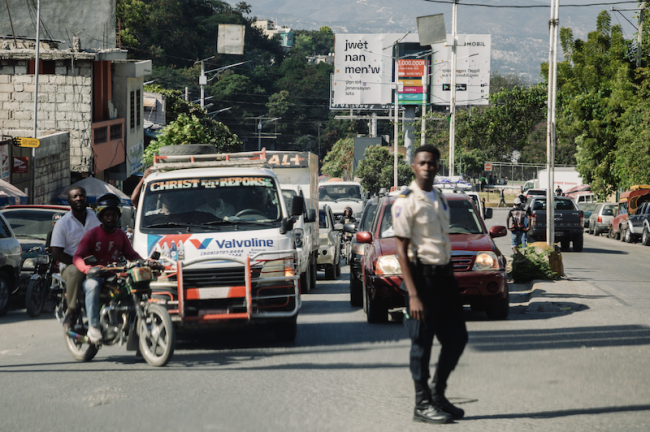 Over the past few months, Haiti has struggled to cope with a chain of devastating human-made and natural catastrophes, including the brutal July 7 murder of the U.S.-backed and controversial president, Jovenel Moïse; the violent August 14 earthquake; and the ongoing Haitian refugee crisis. These recent events add to the burdens of Haiti’s cumulative crises that long predate the global Covid-19 pandemic and have been exacerbated by arrested infrastructural development. According to reports from the United Nations Development Program (UNDP), Haiti saw no progress in infrastructure or quality of life between 2015 and 2020.

Indeed, Haiti’s human development index has been in decline since the 1990s, ranking in recent years at 170th. For two years, the country has experienced a protest-driven national lockdown, known as peyi lòk. At the same time, Haiti continues to struggle with the lasting harms of colonialism, the continuous damage of neocolonialism, and the impacts of cumulative personal trauma. These experiences have had devastating effects on the overall health of Haitian citizens and the country’s healthcare systems. The sheer scale of sociopolitical disaster that has gripped the nation since the U.S.-backed Haitian Tet Kale Party (PHTK), the slain president’s political party, took office in 2011 raises alarm about the consequences for Haitians’ mental and physical health and well-being. This urgent situation demands sustained international support for solutions that center the will, leadership, and expertise of Haitian people, while prioritizing social peace as a foundation for overall health.

In 2018, as mistrust of the political process and disgust with the lack of political accountability drove anti-corruption protests in Haiti, the country scored 4.90/10 on The Economist Intelligence Unit’s Democracy Scale. This scale is based on an assessment of factors such as the freedom of the electoral process and political pluralism, government functioning, citizen political participation, democratic political culture, and civil liberties. In 2020, the country’s rating fell even further to 4.22/10, with its government functioning index hitting a dismal 1.71/10. 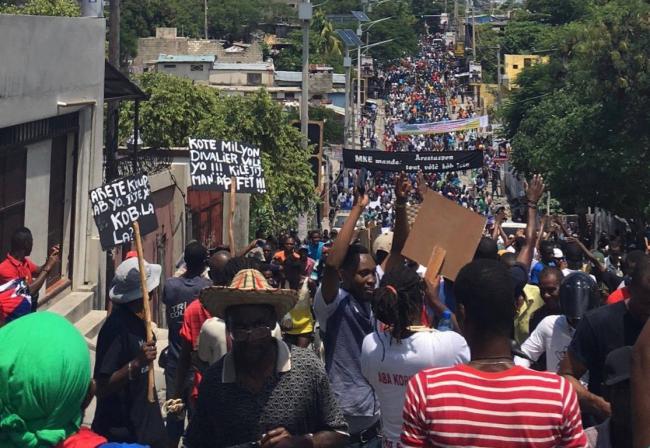 Meanwhile, multiple national and international organizations have documented an increase in organized crime in recent years, including murders, kidnappings, armed robberies, illegal arms trafficking, and paramilitary and/or gang activity. Between 2017 and 2019, homicides increased by 42 percent nationwide and by 66 percent in Port-au-Prince, according to the United Nations Integrated Office in Haiti (BINUH). The numbers continue to rise: in the first four months of 2021, intentional homicides increased by 17 percent compared to the last four months of 2020.

The incidence of abductions has also spiked sharply. BINUH reported 234 cases of kidnapping in 2020, triple the 78 cases recorded the previous year. However, the Center for Analysis and Research on Human Rights (CARDH) paints an ever graver picture: 796 kidnappings in 2020 and 782 in 2021, as of October. Many of these kidnapping cases occurred in the metropolitan area of Port-au-Prince. According to UNICEF’s regional director, Jean Gough, “Criminal gangs use children as bargaining chips and earn money from the love of parents for their children.”

An increase in illegal firearms has accompanied this precipitous rise in violence. In 2015, the director-general of the National Police of Haiti, Godson Orélus, reported that 250,000 to 260,000 illegal weapons were circulating in the country. But by 2020, this number had doubled to 500,000, according to the Haitian human rights organization RNDDH. In the same report, RNDDH identified 96 gang leaders. Based on these numbers, our statistical analysis suggests that 44 percent of people in Haiti are at risk of becoming victims of armed violence. The United States is the source of the majority of illegal firearms in Haiti.

The impact that this pervasive violence has on the overall well-being of Haitians, especially youth, is highly concerning. According to a report by Médecins Sans Frontieres, more than 83 percent of patients the organization treated in Haiti between 2015 and 2017 were victims of rape, and among them 60 percent were under the age of 18. The threats of violence against youth continue: on October 30, 2021, unidentified assailants carried out an armed attack in the courtyard of Collège Saint-Louis de Bourdon, a private Catholic girls-school in Port-au-Prince. Four people were injured: two parents, a student, and a security guard.

Psychologists and education professionals are alarmed by the adverse nationwide impact the present crisis has had and will continue to have on learning abilities and psychological distress among school-aged children and students. In 2019, studies conducted by Margaret McNairy of Weill Cornell Medical College and the Group on Kaposi’s Sarcoma and Opportunistic Infections (GHESKIO) showed that young people in disadvantaged Haitian neighborhoods are especially plagued by psychological distress and high blood pressure. The researchers linked this high burden of psychological distress with the participants’ precarious living conditions.

Economic instability adds to the precarity. From 2010 to 2020, inflation in Haiti increased from 4.8 percent to 22.7 percent, according to World Bank figures. A climate of fear grips the population and signs of distress are noted on social media every day, such as the loss of desire to live and the inability to sleep or go out. Leaving the country remains the only choice for those who have the means to seek a better quality of life. But many who undertake these perilous journeys only find themselves forced to return. The International Organization for Migration (IOM) recently reported 6,095 repatriations to the country since 2018, including 4,103 from June 2020 to June 2021, of which 3,807 or about 93 percent were classified as forced.

Amid this multidimensional crisis, another humanitarian emergency has emerged. On October 24, 2021, the Haitian national newspaper Le Nouvelliste reported the hostile takeover of the fuel sector by paramilitary forces/armed gangs. Days later, these groups seized multiple fuel trucks, kidnapping the drivers and their assistants and demanding a ransom. If such demands go unmet, these groups sell the fuel on the black market.

At the onset of this forced shutdown of the fuel sector, the 40 members of the Association of Private Hospitals of Haiti, an association of all non-state hospitals (private and charitable) in the metropolitan area of Port-au-Prince, raised alarm. Without the creation of an emergency corridor, they warned, the gasoline crisis could immediately impede their abilities to provide services to the population. On December 14, 2021, as fuel distribution resumed in the country, a gas truck explosion in Cap-Haitien in northern Haiti killed 75 and wounded dozens of others. Officials say this tragic health outcome is a direct consequence of residents approaching the truck in a desperate search for fuel. Doctors are scrambled by the scope of the explosion’s devastation, given that the country’s most important hospital lacks facilities to care for burned patients.

The worsening socioeconomic crisis has led the U.S. and Canadian governments to urge their citizens to promptly leave Haiti. To mitigate the devastating effects of this crisis on an already weakened Haitian healthcare system, and to reduce its adverse impact on Haitian lives, domestic and international political leaders must recognize the urgency being vocalized by Haitian mental and physical health professionals throughout the country and the diaspora.

Haiti’s vulnerable political and socioeconomic situation is well documented. According to the Centers for Diseases Control and Prevention (CDC), social organization, healthcare infrastructure, and political and sociohistorical contexts collectively offer the greatest insight into understanding overall health. And numerous studies have shown that chronic stress is associated with catastrophic mental and physical illnesses, such as hypertension, diabetes, depression, and anxiety. While such data is scarce in Haiti, the impact of chronic stress has manifested in a stark rise in suicide. This year, one private university of 3,000 students in Port-au-Prince lost three by suicide. Data from the World Health Organization indicate that the suicide rate increased from 9.5 per 100,000 population in 2005 to 12 per 100,000 population in 2016.

There is a clear and desperate need for Haiti to leverage the solidarity of allies and the strength of the Haitian communities across the globe to comprehensively attend to this health crisis. Indeed, the lasting effects of these crises tend to be rendered invisible once the immediate tragedies fade from news cycles. Haitian people require sustained support that adheres to the will of Haitian peoples. Despite the urgency, there has largely been silence among the global health community.

Given the historical roots of the ongoing sociopolitical conflict that is seriously impacting the lives of Haitians in Haiti and abroad, the global health community should rally Haitian population health experts to tackle the physical and mental health consequences of this violent crisis. This requires supporting Haitian hospitals and health care professionals’ calls for immediate support and sponsoring the organization of an evidence-based, culturally-tailored peace-building program that brings together Haitian scientists, academics, scholars, intellectuals, professionals, grassroots leaders, human rights advocates, political activists, religious leaders, and a council of elders. Such a program would provide a platform to amplify diverse Haitian voices and to brainstorm scientifically and culturally sound solutions to systematically address the deleterious health outcomes of the ongoing sociopolitical crisis. Such efforts should also support an action plan that integrates evidence-based Indigenous and African-centered best practice models.

The succession of crises in Haiti—political unrest, gang violence, and natural disasters, among others—have weakened the country’s healthcare system and have placed an inhumane and unprecedented burden on Haitian hospitals, doctors, and medical staff. Haitian children and adults continue to experience traumatic events that impact their mental and psychological well-being, cause medical conditions such as high blood pressure, and impact their schooling and academic performance. The siege on the fuel sector, kidnappings of medical personnel, intentional roadblocks, and limited supplies put patients at constant risk of death or not having their medical needs met.

We call on the global health community to be our allies as we demand that the political leaders in Haiti and abroad bring about changes in the country that will increase the safety of our first responders and ultimately that of Haitian citizens and patients in our hospitals, homes, and clinics. Through increased awareness, evidence-based Indigenous and African-centered peace-building education, and political pressure, Haitians, the Haitian diaspora, and allies of Haiti throughout the international community can lend tremendous support to our medical communities on the ground in Haiti and improve health outcomes for the Haitian population.

Judite Blanc is a Behavioral Scientist, assistant professor in the Department of Psychiatry and Behavioral Sciences at the University of Miami’s Miller School of Medicine, and a member of the Society of Haitian Neuroscientists, Inc. She is the Principal Investigator of a new longitudinal study, which aims to investigate multilevel determinants of Haitians’ well-being in the United States and Haiti.

Evan Auguste is a doctoral candidate in clinical psychology specializing in forensic psychology at Fordham University, a member of the Association of Black Psychologists, and a member of the Society of Haitian Neuroscientists, Inc.

Dorothy Gaspard-St.Cyr is a speech-language pathologist, clinical instructor at the University of the District of Columbia’s Speech-Language Pathology program, and a member of the Society of Haitian Neuroscientists, Inc.

Guerda Nicolas is a psychologist, professor at the University of Miami’s School of Education and Human Development, and a member of the Society of Haitian Neuroscientists, Inc.

The authors would like to acknowledge the following individuals who have directly endorsed the above article by requesting to be named as signatories: