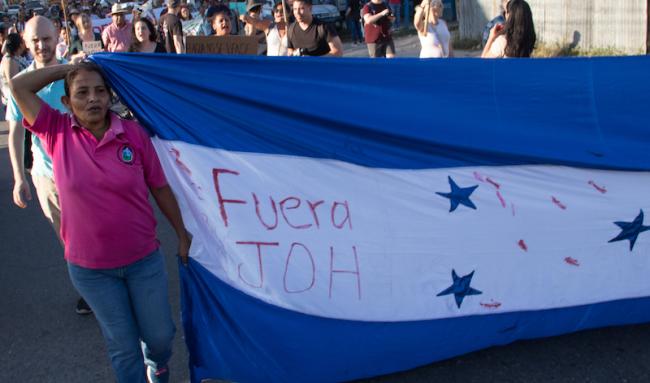 This article was originally published in Spanish on Nueva Sociedad.

Honduras is headed into one of the most important and polarized elections in its history. The old two-party system, useful for certain sectors of the Honduran bourgeoisie, ruled without opposition for nearly a century. After the 2009 coup against Manuel Zelaya’s government, the Libre Party was born. Along with the National Party, Libre is leading the polls ahead of the November 28 general election.

A Restructuring of the Honduran Elite

After the 2009 coup, Honduras was forced down an increasingly neoliberal path. Organized crime infiltrated public institutions and society grew more authoritarian and militarized. The corollary of this process was a restructuring within the Honduran elite. Sectors linked to the banking system, telecommunications, energy, and services quickly came to the fore, maximizing their power in alliance with the country’s kleptocratic political elites. For many, the political class has been operating in the service of this business sector.

Economic growth rates show that, between 2006 and 2019, the manufacturing sector associated with the coup experienced an unprecedented boom. The financial sector, as well as communications, transportation, storage, electricity, and the water utility, grew at a rate of approximately 100 percent while also consolidating the largest flows of foreign investment. If you also include recent reports placing the cost of corruption at around 12 percent of Honduras’s GDP, it appears that the realignment in economic policy is aimed at benefiting the manufacturing and political sectors. The main agreement between this emerging elite sector and political elites has weakened public institutions. Corruption and impunity have overtaken the political and social landscape.

Benedicte Bull, director of the Norwegian Research Network on Latin America, asks, “What is strong when institutions are weak?” And she argues, “In the Northern Triangle, in particular, the answer is networks of elites and their dominance, as well as the competition among them for this dominance.” To this we must also add the growing presence of organized crime. As Darío Euraque asserts, “In the decade after the coup, it seems that the weight of the most powerful traditional segments and their influence on the concessionary state was assumed instead by transnational drug trafficking networks.” This pact is boosted by the promotion of plunderous economic policies, extractivism, and profit for these sectors, with the military and the Evangelical church defending and promoting this model.

The most evident political mark left by this pact between elites has been the consolidation of power in the executive and the democratic setbacks associated with it. With the Covid-19 pandemic, this process strongly intensified. The public health situation has served as a justification for greater doses of authoritarianism, an increase in military presence, restrictions on rights, and the closure of democratic spaces, among other human rights violations.

Opinion polls show a persistent and growing distrust in public institutions, political parties, and the judicial system. Similar attitudes are also seen toward other social actors such as private companies and nonprofit organizations. Nevertheless, the population seems to maintain hope in a transformative future. Opposition to Economic Development and Employment Zones (ZEDEs) shows the existence of a powerful land-based movement that resists neoliberal policies and authoritarianism. Similarly, important—albeit partial—political and electoral reforms have been achieved, such as securing the participation of the main opposition party in various electoral bodies and the passage of a new Electoral Law. In light of this situation, the forces that seek to continue the neoliberal-authoritarian project stoke violence and political tensions to foment instability, or perhaps even a coup. Between December 2020 and May 2021, the Institute for Democracy, Peace, and Security (IUDPAS) at the National Autonomous University of Honduras documented 35 cases of political violence.

Two large disputing blocs represented by the main contenders, the National Party and the Libre Party, make up the landscape ahead of the November elections. The “continuity bloc” of the neoliberal-authoritarian project is led by the National Party, an expression of the kleptocratic elite serving as a political tool for the emerging elites that consolidated politically and economically after the 2009 coup. This bloc is strongly supported by the Armed Forces, Evangelical churches, and mainstream media—i.e. those that have benefitted throughout the last decade. To exert its influence, the National Party relies on public and private resources—money, favoritism and political patronage, public institutions, legal services—as well as U.S. support. Despite the fact that both the current president and the National Party’s presidential candidate, Nasry Asfura, have been named in corruption cases and large-scale drug trafficking schemes, they have not received condemnation nor sanctions, as has been the case  in countries not in line with U.S. regional policy.

The opposition bloc—or the "bloc of rupture from neoliberal authoritarianism"—is composed of social actors affected by the model installed after the coup. It has been organized, fundamentally, within social and territorial movements that maintain a temporary alliance with the Libre Party, founded by Manuel Zelaya after he was deposed in 2009. With Xiomara Castro as its candidate, Libre proposes a “new economic model” and what it calls a “refounding of the state.” However, within this bloc, made up of social and popular movements, there are differences of opinion regarding how to execute this new model. Broad sectors including members of civil society, public intellectuals, and grassroots Catholics have gathered around this bloc to fight to reclaim public institutions. Their resources, however, are limited. Their power depends in large part on territorial organization and access to alternative media.

Finally, there is also a third bloc that functions as a pivot in a possible negotiation scenario. This bloc is made up of traditional elite sectors close to opposition parties—mainly the Liberal Party and the Salvador de Honduras Party—that are vying to regain control over public institutions and the rule of law as means to restore the profitability of their businesses. However, these sectors oppose a project that implies an “alternative economic model” as proposed by the “bloc of rupture.” This places them in a middle ground position from which they could negotiate electoral or institutional support in the event of conflict or a transition.

There are two probable scenarios. The first would be a repeat of what happened in 2017: a fraudulent victory for the National Party, eventually imposing the governing party despite broad national mobilizations rejecting the outcome and calls from the international community to redo the elections. The other scenario would be a victory for Libre, but without a majority in the legislature. This would provoke serious challenges to its institutional refoundation agenda and would allow the National Party to systematically boycott Libre from within Congress and from within different public institutions, since the next Congress will elect officials to diverse institutional bodies. This does not mean we should rule out other possible scenarios of extreme polarization and political violence that could lead to a coup d’etat or suspension of the electoral process.

Monitoring respect for the popular will, supporting the restoration of democratic spaces, and bolstering reforms that improve the democratic electoral system and confidence in public institutions will be key for all sectors that seek to reclaim democracy and institutions in Honduras.

Christian Duarte is an economist from the National Autonomous University of Honduras (UNAH) and a graduate student in government and public affairs at the Latin American Department of Social Sciences (FLACSO). He is a member of the Libre Party.