From Housing to Homespace in Bolivarian Caracas

For Venezuelan grassroots housing activists, brick and mortar structures are only one step in the daily struggle to build community and belonging. 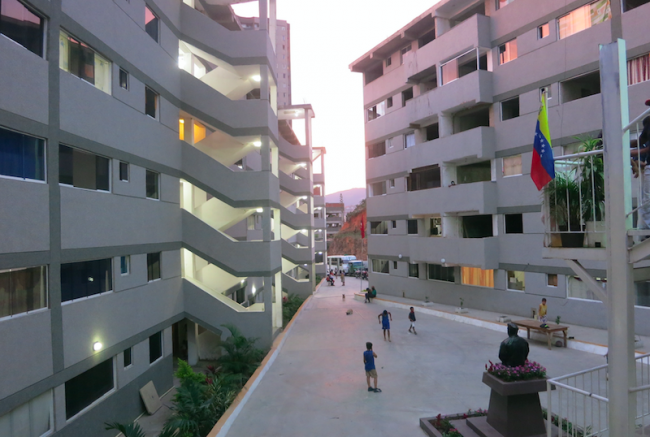 “Este no es un movimiento viviendista.” I heard this phrase many times in the assemblies of Venezuela’s Movimiento de Pobladores y Pobladoras (MPPV) in Caracas: this is not a housing movement. Although the MPPV is a movement demanding greater access to urban land and housing, not being “viviendista” expresses that their end goal has never been to build houses, but to build communities. The phrase also differentiates the movement from other groups and housing initiatives that emerged in the context of what is now known as the Bolivarian Revolution.

The MPPV is an agglomeration of grassroots housing organizations with roots in anti-eviction and barrio-based struggles. In recent decades, these groups have organized against the devastating effects of the 1980s debt crisis, the deepening inequality brought by neoliberal restructuring in the 1990s, and the further exclusion of low-income residents from the “formal” housing market during these periods. Despite some significant efforts to build low-income housing between the 1970s and 1990s, governments primarily invested revenues from the national oil industry in the private housing market to promote homeownership among the middle and upper classes. Except for the self-built homes of the barrios, access to housing and homeownership were elusive goals for low-income urban residents, particularly in densely populated centers such as Caracas. After Hugo Chávez was elected president in 1998, grassroots organizations fighting for social justice—such as the movements of tenants, residential workers, squatters, and others making up MPPV—sought to advance their demands within the Bolivarian project.

In 2002, Chávez created Urban Land Committees (CTU), one of the government’s first experiments with participatory democracy. As Andrés Antillano asserts, the CTU’s creation was the result of activists and urbanists lobbying for greater inclusion of impoverished urban populations in the Bolivarian project. CTU were predominantly barrio-based organizations in charge of implementing a state-led land-titling program to grant tenure security (seguridad de la tenencia) to those who had built homes on lands they did not own. Based on communal censuses carried out as part of the land-titling effort, activists identified the need to occupy land and build housing for those who would not benefit from the titling process. These projects were called Pioneer Camps or New Socialist Communities. Many MPPV members participated in the CTU and later became leaders or members of Pioneer Camps, one of the movement’s most vibrant currents.

In 2011, after many years of CTU activity, leaders of the MPPV presented their proposals to President Chávez in a televised meeting, during which he approved land occupations and funding for 11 pilot Pioneer Camps. This important milestone for the MPPV coincided with the launch of the nationwide housing program that became the government’s most ambitious state-funded social program: Gran Misión Vivienda Venezuela (GMVV). The mission initially promised to build two million new homes in seven years to relocate families living in precarious conditions as well as those displaced by landslides in 2010. While MPPV benefited from the legal and institutional infrastructure created to implement the GMVV, it also tried to position itself as a movement working toward a profound societal transformation. It aimed to offer an “urban revolution” through a network of self-governed communities connecting different parts of the city and potentially the country. 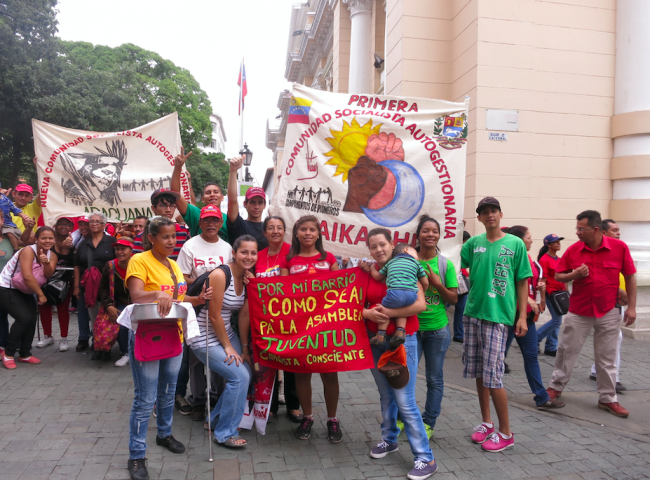 As the most important and visible state-funded effort to solve housing inequality in Venezuela during the Bolivarian period, the GMVV has been the subject of severe criticism and increasing scrutiny. However, much can be learned from how urban residents attempted to find solutions to their housing problems at the grassroots level while claiming to be part of the Bolivarian project. Although the MPPV gained strength and public recognition—through funding and legal backing—when Chávez was in power, it remained marginal within state-led housing policies. Yet, a closer look at everyday micro-dynamics shows how grassroots organizations like Pioneer Camps used housing as an opportunity for community-building. They challenged not only socioeconomic exclusion but also interconnected forms of discrimination such as racism, xenophobia, homophobia, and sexism.

Bell hooks writes that domestic spaces constitute homeplaces insofar as they can provide refuge and safety from racist and sexist oppression. Historically, Black women globally have been at the forefront of building homeplaces where people can recover their dignity lost in a world dominated by white supremacy. Claiming to build communities that differed from dominant middle-class forms of dwelling, the MPPV and especially the Black and mestiza women who participated actively in the movement engaged in a form of homeplace-making by turning housing projects into collective homespaces.

Between 2014 and 2016, I conducted research at the Pioneer Camp Kaika Shi located in La Vega parish in Caracas. Everyday intra-camp dynamics illustrated how these organizations wrestled with the challenge of building more inclusive communities where participants could not only have access to a house but live better lives. Critical of state- and market-led solutions to housing issues in the highly segregated capital city, the MPPV was not interested in building houses to distribute for “free” without building organizational capacities, as it claimed the government was doing through the GMVV. Pioneers attempted to build a homespace through discussions about childcare, conviviality, and “integration,” as well as efforts to bring a feminist consciousness into camp activities. Making their political vision a reality required painstaking daily work and a trial an error approach to community-building. The case illustrates the vibrancy of grassroots organizations that grew within the bounds of state-led housing policies, as well as the multiple diverse outcomes of housing initiatives propelled as part of the Bolivarian Revolution. Moreover, highlighting how residents of Pioneer Camps moved from building housing to building a homespace brings to light issues otherwise left unexplored in the many analyses of the Bolivarian Revolution centered on the Chavista-opposition divide.

Drawing from the experience of autoconstrucción in the barrios or so-called informal settlements, Pioneer Camps occupied centrally located land in Caracas to collectively build housing complexes in the “formal” parts of the city from which they had formerly been excluded. Relying on state and family support and the work of volunteers, the camps leveraged an assembly system and an intricate organizational structure to carry out ambitious construction projects.

In 2011, the first members of Pioneer Camp Kaika Shi occupied government-owned land that had been leased to an individual who in turn subleased the space to a number of businesses. The land was located between the barrios of La Vega parish, where most members resided prior to the occupation, and the middle-class urbanizaciones, or planned urban developments, of El Paraíso and Montalbán. For MPPV leaders such as María, an Afrodescendant woman who grew up in La Vega and became the main leader of the camp, this plot of land and its uses represented the latifundio urbano, or the historic misappropriation and concentration of land in the hands of a few landowners for private gain. María was also the proud founder of the first CTU, located in La Vega. Kaika Shi represented what she called “la lucha histórica” (historical struggle), and she saw her efforts to build a new socialist community from scratch as an extension of her personal struggles as a Black single mother and barrio-based community leader. 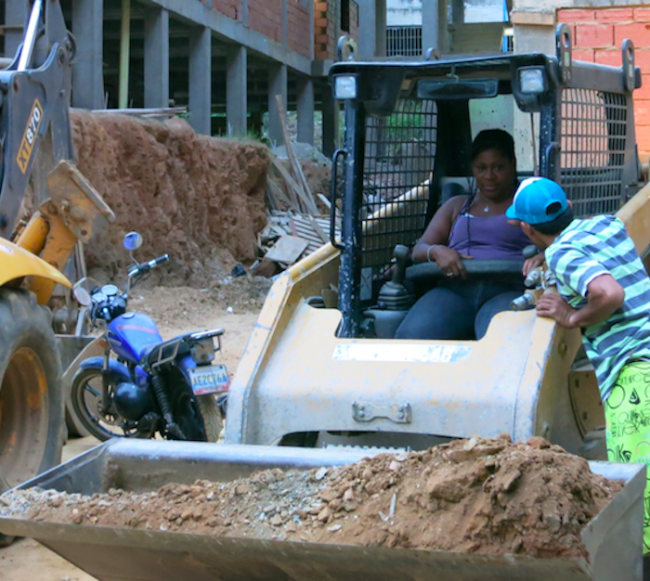 Between 2011 and 2015, the Kaika Shi pioneers, in coordination with MPPV leaders, collectively built a housing complex of 92 apartments organized in four six-story towers, following a participatory design process. It was important for the MPPV to incorporate ecological concerns into their housing struggle since there was a growing awareness of climate change's acceleration of housing inequality in Caracas and nationwide. The devastating effects of floods and landslides in 2010 had left thousands of Venezuelans homeless or damnificados.

The camp had collective spaces residents used for assemblies, food preparation, storage, offices, and other purposes. One of the MPPV’s goals was to build a collective property regime in which community members managed both apartments and collective spaces through decisions they made in the assemblies and according to by-laws. They also incorporated movement principles such as granting members use rights rather than exchange rights over the apartments. Since they used artisanal techniques and only hired a small crew of construction workers for specialized tasks, the construction phase consumed a lot of organizational and physical energy. Families were responsible for finishing the internal structures and fixtures of their apartments.

Between 2014 and 2016, the MPPV organized amid increasing political polarization. Confrontations between government supporters and opposition sympathizers had intensified after the failed 2002 coup that temporarily removed President Chávez from office. After 2005, the Chávez administration took a decidedly more socialist path, which included a thrust for more aggressive land expropriations and heavier involvement of the state in more sectors of the economy, creating conflicts with the private sector. Moreover, 2014 brought the beginning of an economic and political crisis caused in part by plummeting oil prices, increasing foreign debt, corruption, and growing inflation, which turned into hyperinflation in 2016. The crisis marked the end of the oil bonanza with which the government had funded its most ambitious social programs and consumption-based forms of inclusion in the early 2000s.

In this context, Kaika Shi shifted its focus from construction tasks to building “convivencia”—coexistence or living together. As a prominent political leader in the camp often told me, managing daily life at the camp, or what they called “integration,” presented great challenges. In a way, the construction phase was easy, mechanical; over time the camp functioned like clockwork. The problems they had to address once everyone lived in the same space were much more complex.

Andreina Torres Angarita holds a PhD in Anthropology from the CUNY Graduate Center and is a Research Associate at CUNY’s Center for Latin American, Caribbean and Latino Studies. Her specialties are gender studies and urban anthropology with a focus on housing, social movements, and state-citizen relations in Latin America.