“Housing is Only the Beginning”

For an Argentine activist, regional coalition-building offers a powerful tool to advance housing justice beyond borders. 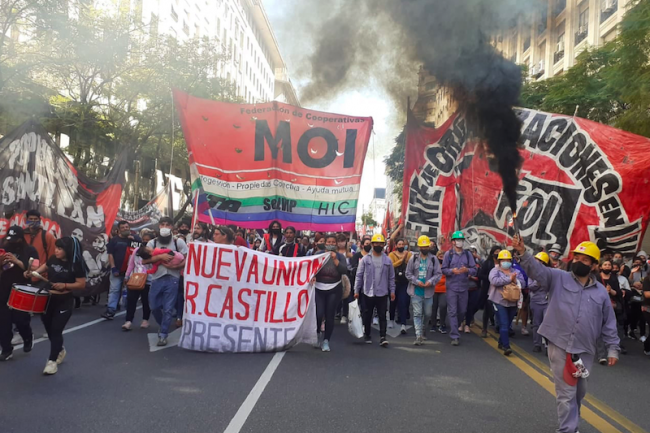 On May 2, 2022, Argentine president Alberto Fernández kicked off an international housing forum in downtown Buenos Aires. Local housing coalitions had called the gathering to garner support for proposed legislation aimed at advancing the right to housing. “One of the central elements to make human development possible is having a roof over our families’ heads,” Fernández said in his opening remarks. “If someone needs a roof, they have the right to have one.”

The gathering brought together a regional network of grassroots organizations, the Latin American Secretariat for Popular Housing and Habitat (SELVIHP). During the meeting, the Argentine participants presented a proposal that was recently introduced in Congress by lawmaker Mónica Macha. The bill seeks to create a national program that would facilitate access to land and financing and enable organized collectives to produce housing themselves, eschewing commercial developers. The proposal builds on the experience of a local program in the city of Buenos Aires, the Self-Managed Housing Program (PAV), which since 2000 has allowed low-income housing cooperatives to access government-subsidized loans to build their own permanent housing.

The common thread running through PAV and the proposal to Congress is the principle of self-management (autogestión). This is also the common motto of the member organizations that make up SELVIHP, who see the struggle for housing justice as a tool for popular empowerment and promote housing as a right instead of a commodity. During the forum, Argentine housing rights organizers shared experiences with activists from Brazil, Chile, Venezuela, and other countries, who also asserted support for the proposed legislation.

Local housing groups’ calls for such legislation have long met stagnation in Congress. A version of the proposal was first introduced in 2019 but did not move forward. Now, however, President Fernández has explicitly voiced support for the bill. This high-level recognition is arguably a triumph for grassroots organizations and underlines the importance of regional networking for activists to foster increasingly sophisticated programmatic proposals advocating the right to housing and habitat in Latin America.

Housing activist Leonor Rojas, an active member of SELVIHP and the Movement of Squatters and Tenants (MOI) in Buenos Aires, was one of the convenors of the event. Originally from Salta province, Rojas migrated to Buenos Aires as a teenager and resided in informal conditions for over a decade. She eventually joined MOI and organized her neighbors to legalize their housing tenure through a cooperative. In the wake of the forum, I spoke to Rojas in Buenos Aires about the power of regional grassroots coalitions and the goals of the housing movement in Argentina and beyond. Our conversation has been edited for length and clarity.

Valeria Procupez: What was the purpose of the May 2 event and how did the connection with SELVIHP make it noteworthy?

Leonor Rojas: This new proposal to Congress has a national scope and is more ambitious than PAV. It involves the use of federal funds; establishes mechanisms to facilitate access to land, tools, and materials; and covers professional fees and other services while keeping all decisions under control of residents’ collectives. We know from the experience in Buenos Aires and other places in Latin America that, through this bottom-up system, we can produce more, better quality, and cheaper popular housing than through commercial development. And we can empower grassroots organizations along the way.

We have been in discussion with representatives of various political parties, but we needed to have a more public presentation. SELVIHP was looking to finally have our first in-person event after two years of the Covid-19 pandemic and virtual calls. We suggested having the meeting in Buenos Aires to coincide with the submission of our proposal and other events.

SELVIHP meetings are usually planned this way to include a moment of mobilization—a public event or a demonstration—when visiting groups show support for whatever project the host organization is advancing. Events also involve a second moment of learning, sharing, and training, where we hold workshops or organize visits to housing projects. SELVIHP provides a forum for teaching and training, but it is also a demonstration to the authorities that we are not alone, that this is a long-term struggle, and that movements in other countries of the region have the same demands, often with better results.

On this occasion, there was not a massive presence of foreign activists. But it was enough to be noticed and give the event an international tenor, which along with the influence of some local social movement leaders, convinced the president to come. He was only there for the opening, but it was the first time that national authorities have agreed to support a bill for self-managed housing legislation. So the event went very well. Now we have to see what happens in Congress. We will keep insisting until they respond! 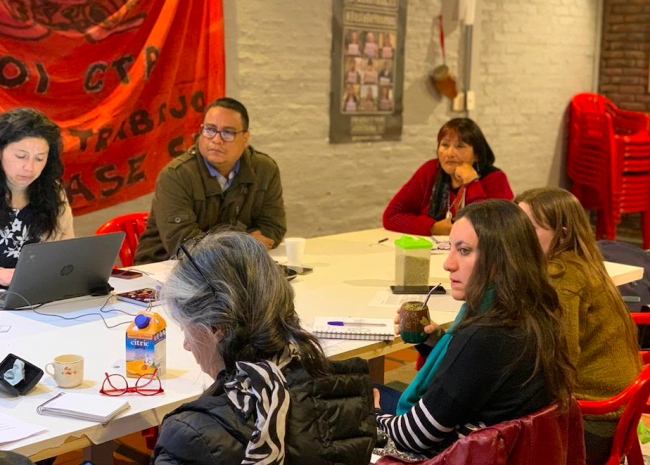 VP: How does SELVIHP work and what does participation entail? What organizations are members?

LR: SELVIHP is a network of grassroots organizations with on-the-ground experience in producing popular housing. So it is different from other organizations like Habitat International Coalition that include NGOs or academics. SELVIHP also seeks to influence public policy and push for legislation that strengthens grassroots development, but it does so by articulating actual organizations that are materially focused on housing.

The network has two key forums: yearly assemblies for training and exchange, and twice-a-year coordination meetings involving one or two activists per organization. The assemblies involve group travel, visits to settlements, as well as workshops and talks about construction, politics, forms of property, legislation, and on-site discussions to think collectively about our practices. During those trips, we lodge with host families and we spend a lot of time interacting, listening to one another, and working side by side. These are usually very intensive weeks.

There are some organizations that are always present, such as MOI from Argentina, the Union of Housing Movements (UMM) from Brazil, the Popular Habitat Network from Chile, the Movement of Settlers (MPPV) from Venezuela, and the National Communal Movement (MOCONA) from Panama. But, in addition, there are other organizations that participate as guests on occasion, such as the Uruguayan Federation of Mutual Aid Cooperatives (FUCVAM) or settlement groups from Peru and Argentina.

VP: How did the network start?

LR: In the early 1990s, FUCVAM invited grassroots organizations from different countries to a workshop in Montevideo to celebrate the federation’s 20th anniversary. Uruguay has had a National Housing Act since 1968 with provisions for construction by collectives—a victory of the unions—and FUCVAM had built lots of worker housing cooperatives in the outskirts of the city. The week of the workshop, there were visits to many housing projects and construction sites to show other groups the history of their struggle for the right to housing.

At the time, in Brazil, the Workers’ Party had won the administration of São Paulo and was implementing the self-managed construction of thousands of mutirões (co-ops). In Buenos Aires, there were scattered autonomous cooperatives forming in squatter buildings seeking to find paths to legalization. In Asunción, there had been land takeovers, and people were trying to assess what to do. It was then that the idea emerged of creating a network of grassroots housing organizations promoting self-management practices. In turn, the existence of a network sparked the creation of other groups.

There was also talk of beginning a Latin American housing court where organizations could denounce violations of the right to housing, but I don’t think that plan stuck.

VP: When you say these are all groups advocating self-management (autogestión), does it mean that organizations are involved in the whole process of housing production?

LR: Yes. Not only in construction, but also in the organizing and planning part. We want residents’ organizations to be active subjects in debates, policies, and decisions about property provisions. The consensus among SELVIHP organizations is that housing is a right and not a commodity—it is not something to profit from. We have to come up with a process that allows everyone access to adequate affordable housing. It can’t be left to the market or the government.

I’ll give you an example: in Buenos Aires during the 1990s, there were many evictions because money was being put into urban renewal, so the older neighborhoods where poorer people lived were being renovated for tourism. Housing in the city became more expensive, and both squatter buildings and tenements were threatened with evictions. There were protests, but the response from the city government was to throw money at the problem, giving those families subsidies to move to the peripheries or accept temporary accommodation in single-room occupancies. What this really means is that the money went to the landlords and the renovated central areas were left for other social sectors.

In the end, people were displaced. The single-occupancy hotels were not a real solution, because when the economic crisis came in 2000 and the government suspended subsidies, there was trouble all over again. Most people were not able to come together and organize or plan what they were going to do. And the problem, of course, is that when there is an emergency, like impending evictions, it is already too late. You run around to find ways to put out the fires, but that only postpones the problem. We need the government to work for us, not for the market.

VP: It must be very hard for grassroots organizations to work on proposals and interact with the government and at the same time maintain a level of autonomy.

LR: It is. And that is a problem for all groups that are against receiving subsidies and being co-opted. We tend to grow in quality—in that we develop better ideas, training, and capacity—but we don’t grow as much in quantity; we remain small. It is a difficult balance, because when you accept assistance from the government, you might become compromised. It is true that immediate needs must be met. But then how will participants realize that they can generate tools with their own hands and their own heads? That they do not need leaders or owners but that the only way to real change is for everyone to mobilize, to learn, to debate, to participate?