Rhythms of the Left in Latin America

For the latest wave of the Left in power sweeping the region, the challenges are steep. Radical politics will continue to emerge from the streets. 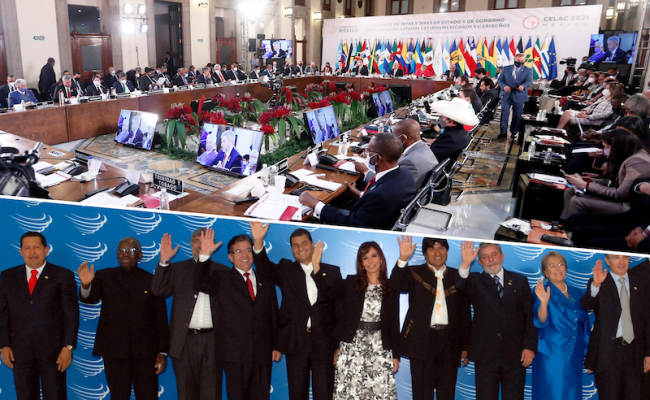 There are signals to support a certain kind of story of left revival: the return of Peronism in Argentina and the Movement Toward Socialism (MAS) in Bolivia, the election of Andrés Manuel López Obrador in Mexico, and, most recently, the rise of Gabriel Boric in Chile, Pedro Castillo in Peru, and Xiomara Castro in Honduras. Until recently, trends in Colombia also suggested the likely addition of Gustavo Petro to the list. Petro came out on top in the first-round presidential election in May but now appears set to lose the runoff in June to Rodolfo Hernández, an upstart right-wing populist who has unexpectedly risen from nowhere. And although in Brazil the elections are not until October, polls at the time of this writing indicate the likely return of Luiz Inácio Lula da Silva to the presidency. In some accounting practices, at least, the continuity of Nicolás Maduro and Daniel Ortega in the respective presidential palaces of Venezuela and Nicaragua are added to the ledger.

Without denying these and other novel developments in the regional political scenario, the underlying motifs of exhaustion and impasse that some of us identified around 2014-2015 seem to retain much of their value. In those countries where a new electoral Left seems indeed to have emerged—Chile, Mexico, Peru, Honduras—it has done so in national contexts that were by and large outside of the earlier left cycle. Meanwhile, in Argentina and Bolivia, where traditional Pink Tide coalitions have returned in new iterations, or in Venezuela and Nicaragua, where Pink Tide governments never left office, they now wrestle with a much more challenging political and economic situation, made gravely worse by the relentless pandemic and accelerating ecological decline, not to speak of rapid internal political degeneration in the latter two countries.

Condemnatory or laudatory, most inquiry into the ostensible new turn to the left in Latin America tends to restrict itself to the electoral terrain, pursue evidence selectively, minimize contradiction, and exaggerate the centrality and feasibility of political change from above. A more capacious view of the Left offers a helpful window into the tendencies and countertendencies now sweeping the region. 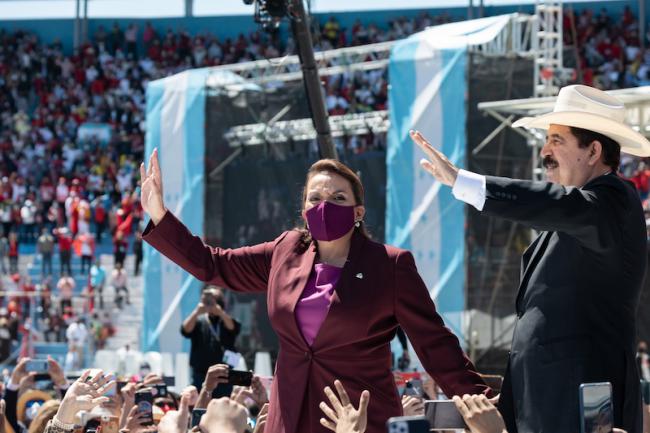 What happened to the political formations at the heart of this century’s original left turn in Latin America? Three exemplary pairings of the Old Pink Tide (OPT)—Brazil and Ecuador, Argentina and Bolivia, Venezuela and Nicaragua—help explore the question.

In Brazil, the Workers’ Party (PT), first under Lula and later under Dilma Rousseff, ruled from 2003 until 2016, when Rousseff was ousted in a parliamentary coup. Now, opposition to the far-right nightmare of Jair Bolsonaro has congealed around the PT and, more importantly, Lula himself. In Ecuador, Rafael Correa of Alianza PAIS ruled from 2007 to 2017. He was succeeded by Lenín Moreno, who, despite having been Correa’s vice president between 2007 and 2013, took a sharp turn toward neoliberal restructuring at the behest of the International Monetary Fund. In 2021, Moreno was succeeded by conservative banker Guillermo Lasso. Unlike Brazil’s Lulismo, Ecuador’s Correísmo has not been at the center of popular opposition to the current president, existing as it does alongside and in tension with a rejuvenated left-Indigenous opposition, articulated socially through the Confederation of Indigenous Nationalities of Ecuador (CONAIE) and electorally through the political party Pachakutik. 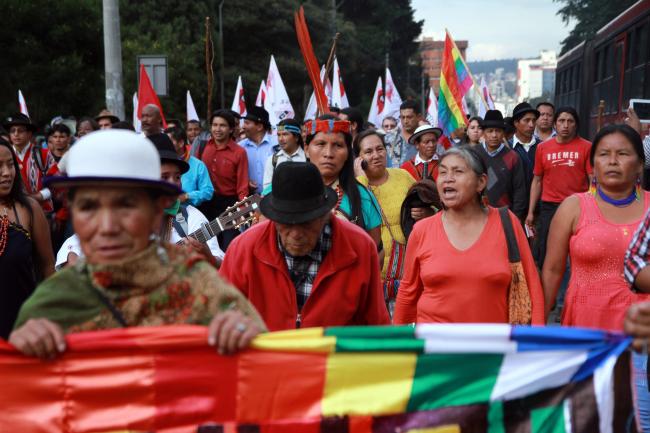 In Brazil, Lula appears to be well-positioned to win the October elections. After his court convictions were annulled and he recovered his political rights, he assumed the mantle of the PT’s machinery in a bid to oust Bolsonaro. Although Bolsonaro recovered some ground in the polls in early 2022, there is nonetheless a consistent majority rallying behind Lula, whose social-liberal presidency from 2003 to 2011 is easy—perhaps too easy—for many to remember as a golden epoch when juxtaposed with the disaster of Bolsonaro’s reign. Lula left office with 80 percent popularity and the economy growing at 7.5 percent, and although the reputation of the PT has since been tarnished by corruption scandals and an economic downturn under Rousseff, Lulismo retains much of its personalist popular appeal.

If, as is likely, Lula takes office again in January 2023, he will do so on an avowedly centrist ticket, to the right even of his first and most neoliberal term in office. In April, Lula confirmed Geraldo Alckmin as his vice-presidential running mate. Ex-governor of the state of São Paulo and two-time failed presidential candidate for the center-right Brazilian Social Democratic Party (PSDB), Alckmin supported the 2016 coup against Rousseff and celebrated Lula’s arrest two years later. Alckmin is also an unadulterated supporter of neoliberal orthodoxy in economic terms, and an ultra-conservative former supporter of Opus Dei in social terms. The Lula-Alckmin ticket is a bid to thwart the viability of a “third way” candidate positioned between Bolsonaro on the far right and Lula in the center. Most of Brazil’s capitalist class and layers of the middle classes would prefer such a third way, but the campaign of their most likely candidate, Sergio Moro, quickly fizzled after a momentary rise to double digits in the polls when his candidacy was first announced in late 2021.

The Party for Socialism and Freedom (PSOL) has long been the most dynamic left alternative to the PT. With social weight that exceeds its more limited electoral capacities, the PSOL is committed to building and participating in mass movements from below. The party was an important organizer of impressive mass demonstrations in mid-2021, when huge numbers took to the streets despite Covid-19’s wildly deadly third phase to call for Bolsonaro’s impeachment. As the horizon of October 2022 approached, however, those impeachment mobilizations ran up against their limits. The Lula-Bolsonaro axis quickly became the only discernible political contest in play.

PSOL’s 2021 national congress decided that, for the first time since its formation in 2004, the party will not run an independent presidential candidate. A minority of roughly 40 percent see this as a major strategic error. The decision speaks to the preeminent fear of Bolsonaro remaining in power, which a majority in PSOL deems a genuinely neofascist threat. The majority position was also strengthened by widespread acknowledgement in the party of the fragmented and defensive position of the working class and oppressed in the country after years of political retreat, economic crisis, far-right repression, and the Covid-19 cataclysm. The party will organize for left unity behind Lula in the first round to defeat Bolsonaro. Yet the party has said it will not join an eventual Lula-led government if it includes supporters of the coup or neoliberal economics. Alckmin ticks both of those boxes. PSOL’s political independence will be vital in the event of a Lula victory, both to fight the soft neoliberalism likely to unfold under his leadership, and to maintain the street presence that will be necessary to defeat the violent, extra-institutional politics of Bolsonarismo even after his electoral departure. 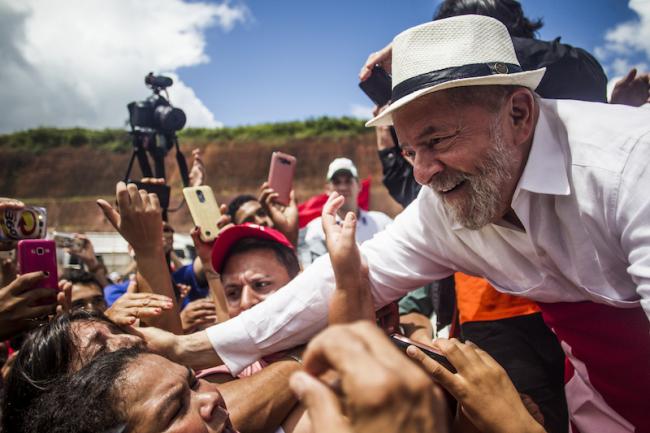 In Ecuador, Correa administered a capitalist modernization model rooted in an intensification of extractive capitalism, with some redistribution of the rents captured by the state from modest royalties and taxes on multinational extractive firms. This model placed the populist president in confrontation with the country’s historically powerful Indigenous movement. After suffering years of relative weakening from internal political and ideological fragmentation and repression at the hands of the Correa administration, CONAIE forcefully renewed its stature as the country’s leading popular movement by spearheading a rebellion in October 2019 against an IMF restructuring package introduced under Moreno.

Movement momentum died down in the face of the devastating early impact of Covid-19 in the country. Ecuador had one of the highest excess mortality rates anywhere in the world in 2020, and Moreno proved monumentally inept at responding to the health crisis. In the 2021 presidential elections, Pachakutik ran its own candidate, Yaku Pérez. Pérez took third spot in the first round, immediately behind Lasso. The Correísta candidate, Andrés Arauz, came out on top, but with a margin too small to avoid a run-off.

In the second round, CONAIE asserted its political independence by calling for a null vote, and ultimately Lasso won with 52.5 percent of valid ballots, followed by Arauz with 47.5 percent. Seventeen percent of total ballots were null votes and so invalidated. Some on the left blamed Pachakutik and CONAIE for splitting the left vote and ushering Lasso into office. That reading, however, fails to interrogate the impact of Correa’s fierce repression and criminalization of the Indigenous movement, extension of extractive mining and oil operations, and systematic attacks on Ecuador’s labor movement.

Interestingly, Lasso’s presidency has thus far revealed the often-limited power of electoral office. His campaign was straightforwardly reactionary, based on adjusting the juridical environment to attract more foreign investors, renewing an agreement with the IMF, bolstering the private sector through a further retrenchment of labour rights, and expanding the country’s extractivist productive structure. Yet he has proved largely incapable of carrying out this agenda. His government has been reduced to banal, centrist policy initiatives that barely scrape the margins of the program he carried into office.

For its part, Correísmo retains a stable but passive base. As little more than an electoral machine presently out of office, Alianza PAIS has been largely irrelevant to the anti-Lasso social resistance. CONAIE, by contrast, has filled the void on the social Left with organizational, grassroots infrastructure capable of mobilizing around an agenda rooted in ecological defense, plurinationality, Indigenous territorial autonomy, and popular feminism, all of which incline against the logic of capitalist domination. To the extent a fighting Left has been renewed, it has been forged through popular-Indigenous struggle, with the partial eclipse of Correísta electoralism and its associated subordination to the logic of extractive capital. 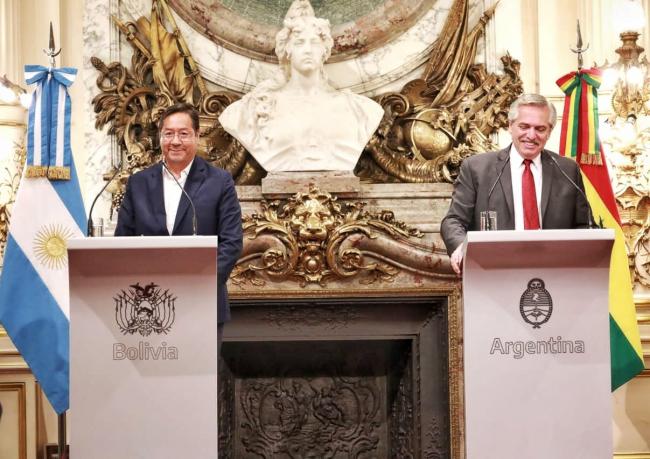 Argentina under Alberto Fernández and Bolivia under Luis Arce constitute another distinct pairing of the OPT. In the Argentine case, the long Peronist reign of neodevelopmentalism under the Kirchners—Néstor Kirchner, 2003-2007; Cristina Fernández de Kirchner, 2007-2015—was interrupted for one term by Mauricio Macri’s 2015 election on a center-right ticket. Peronism returned to power in the 2019 elections through the victory of Frente de Todos, a coalition under the centrist leadership of Alberto Fernández and his vice president Cristina Fernández (no relation). In Bolivia, a 2019 right-wing coup d’état ousted Evo Morales, in office since 2006, and installed the short-lived dictatorship of Jeanine Áñez. Elections in 2020 returned Morales’s MAS, but this time under Arce, previously finance minister throughout Morales’s rule.

Both the Kirchners in Argentina and Morales in Bolivia represented a neodevelopmentalist political economy and a pacifying/integrating relationship with popular movements. The rise of Alberto Fernández signals a move from the left of 21st century Peronism to its center. In Bolivia, where there was no thoroughgoing transformation of the country’s productive structure, but some wealth distribution so long as commodity prices were high, Arce has long been the wonkish technocrat to Morales’s amiable populist. Arce is a competent neo-Keynesian economist, but he lacks Morales’s political instinct and ability. Arce also rules in bleaker material times and is governing well to the right of Morales’s heyday.

Jeffery R. Webber is an Associate Professor in the Department of Politics at York University, Toronto. Most recently, he is co-author, with Franck Gaudichaud and Massimo Modonesi, of The Impasse of the Latin American Left.