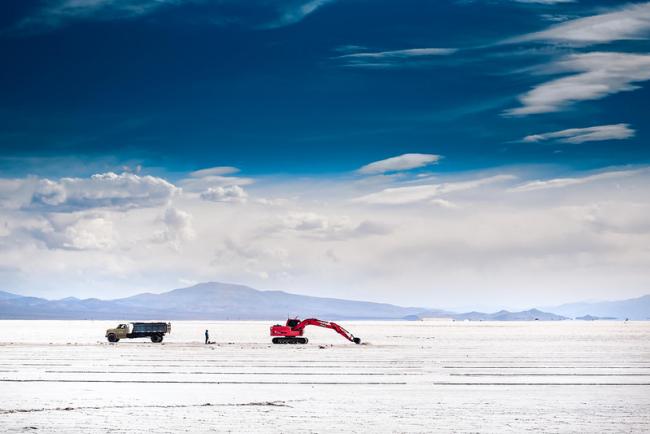 Travelers who visit Argentina’s arid plateau, Puna, discover a landscape of wind, sun, and salt at 4,000 meters above sea level that offers a new understanding of silence, cold, distance, and water. The people who have lived there for centuries have managed to sustain their lives, raise their children, and practice their culture through an almost symbiotic relationship with their environment. These communities now find themselves struggling to survive as a result of the lithium boom.

In recent years, the extraction of lithium in Puna’s salt flats has exploded. Lithium mining represents huge earnings for national and international mining companies, as well as the Argentine state. Some lawmakers are pushing to nationalize the lithium industry, which could represent $2.1 billion in exports for the country over the next ten years.

“The idea is to start seeing lithium as a national strategic resource and to set guidelines for state control in the extraction, commercialization and processing stages of the mineral,” said Chamber of Deputies representative Marcelo Koening in recent statements.

But for local communities like Guayatayoc, this process drains the water sources that support hundreds of families.

“In our Puna region, between Salta and Jujuy provinces, it rains only 100 millimeters per year,” said representative from Guayatayoc Clemente Flores in an interview for the documentary In Lithium’s Name. Puna is naturally linked to salty plains where mining companies drill in search of lithium.

The process of extracting lithium starts with drilling down into the earth in high altitude planes. Salty brine is extracted from reserves and stored in surface-level ponds of fresh water. There, the water evaporates over a period of months and leaves behind the lithium. According to the Latin American Observatory for Mining Conflicts, to produce 1 ton of lithium it is necessary to use 2 million liters of water.

“The consumption of water for the extraction of lithium can only come from the subterranean springs,” said Flores, explaining the importance of groundwater. “If progress is made with this activity, wells must be drilled tens of meters deep in order to get water, the springs will dry up and leave communities without water.”

Anyone who sets foot on Puna experiences the aridity, lack of oxygen, and extreme temperatures of the plateau. With no easily accessible groundwater, life has always been a challenge for the area’s inhabitants, but recently companies and politicians are taking interest in this seemingly inhospitable land. According to the U.S. Geological Survey, Puna has the second biggest lithium deposit in the world, with over 19 million metric tons of the mineral under the desert soil. With a price of $19,000 per ton, new plants to mine lithium have been proposed in the area. As a result of its value, the term “white gold” is being used to describe the mineral.

Julio Ernesto Calvo is a chemist who has studied lithium development for years and thinks that the Argentine government must take a more active role as a top lithium producer using methods that avoid environmental damage.

“Argentina, given its scientific-technological tradition, is able to develop technology and train human resources that understand these new technologies,” he said. “The state,” he emphasized “must play a fundamental role in mining.”

Argentina’s 1994 Constitutional Reform established that “the original domain of the natural resources existing in their territory corresponds to the provinces.” But for the state to succeed as a responsible producer, the production and policies need to be centralized under the federal government.

Currently, there are only two companies exporting lithium: the American Livent in Dead Man Salt Plain, Catamarca province and the Australian Orocobre in Olaroz Salt Plain, Jujuy province. But according to the latest official figures, there are more than 50 extraction projects being analyzed or built in Puna. This could increase Argentina’s production from 10 percent of the world’s lithium to make the country one of the world leaders in lithium production. But, production of lithium does not necessarily mean control of the resource.

“The lithium business in the world is in the hands of six companies,” said Calvo. “The division of labor means that, in South America, [lithium] is extracted and then taken to developed countries where it increases in value.” In the last report by Mining Technology, the biggest of the global lithium mining companies—the Chinese Jiangxi Ganfeng and Tianqui firms and the U.S. company, Albemarle—are listed with market caps of over $24 billion dollars each.

Besides, Calvo explained, Latin American countries only contribute to the upstream level of the lithium value chain, the simplest stage of the chain that only includes extracting lithium from brines and rocks. The manufacturing of batteries for electronic devices and cars happens mostly in Southeast Asia.

“Regarding the battery manufacturing business, Roskill analysis shows that 54 percent of it is held in Southeast Asia, 26 percent in Europe and 10 percent in the United States,” he said.

The Communities and the Companies

The mining projects are making life difficult for the locals who live in an already challenging environment. The average altitude on the Puna plateau is 3,800 meters (about 12,500 feet) above sea level, which makes for low oxygen levels. Water in the area is also scarce, with only 100 mm of rain per year in some areas, so locals depend on underground water collected from wells close to the salt plains. During winter, temperatures drop below -10 °C (14° F). The result is a high-altitude desert where subterranean water currents make life possible in an almost miraculous environmental balance.

“Ninety kilometers from our community, in the area of ​​the Cauchari salt flat, they are exploiting lithium,“ said Flores. “We see what is happening: large drilling, dry slopes, farmers who are forced to leave with their llamas. And nobody talks about it.”

The Fundación Ambiente y Recursos Naturales (Environment and Natural Resources Foundation, or FARN) is now talking about it. FARN is one of the most outspoken environmental NGOs in Argentina. Last August, they released “En el nombre del litio” (In Lithium’s Name), a documentary on how this mineral extraction is putting Puna’s inhabitants and ecosystem in danger.

“The biggest risk is to destroy the delicate balance of Andean water sources.These ecosystems are very sensitive and fragile,” said FARN’s Environmental Policies director Pía Marchegani. “If the mining companies extract the brackish water containing lithium, they might also extract fresh water, which is very scarce. And this can generate irreversible damage to the ecosystem.”

Orocobre S.A., one of the companies located near Guayatayoc Community, disagrees about the impact their work has on the local water supply. “Brine is extracted from wells with minimum impact on freshwater resources outside the salty plains'' the company says on its website. In their “Environmental Footprint” disclaimer they say they say that the method they use to extract brine with lithium does not reach the currents of underground fresh water which are critical for communities’ life.

”The process route is designed with a zero liquid discharge design. All waste products are stored in permanent impoundments,” Orocobre claims. In other words, they say wastewater will not contaminate fresh water sources. According to the company, after the mining process ends, the ponds carved in the soil for brine extraction will be capped with the same soil and vegetation that was there before the extraction began.

Calvo’s team has spent years researching and developing new techniques for extracting lithium that are less harmful for the environment.

The method he developed consists of using special electrodes to attract lithium using far less water than the “evaporation” method uses. This not only reduces environmental impact but also reduces the evaporation time from months to hours, which helps increase profits. However, Calvo admitted, “Every extractive process has some environmental impact.”

The debate on extraction methods and its impact on the environment persists, and Guayatayoc communities, protest near the companies’ facilities. Lithium, they claim, cannot leave hundreds of families without water. About this concern, Clemente Flores said, “So far we are waiting on the part of the state to consult the communities and find out together the possible alternatives, because we never saw the plan for the exploitation of lithium.”

Defending a Source of Life

While lithium’s nationalization is still just a hazy idea among lawmakers, high in the arid plateau, the communities have ideas as clear as Puna’s skies.

“We are not against mining, but we must make our voice heard,” said Flores.

Along with their neighbors and inhabitants from other communities, they elaborated a document on their “right to consultation and free, prior and informed consent." What the communities want is an official guarantee from the state that their ecosystem won’t be affected by the mining process and that the extraction respects their views and relationships with the environment.

In that document, called Kachi Yupi (Salt Footprints), they explain to the state why and how their culture should be consulted before companies decide over their water sources.

And Flores is as determined as the Puna’s wind is strong: “We want this document to be binding and we also want the state to fulfill it. Otherwise our rights are violated. Ultimately, what keeps us moving is being able to conserve this piece of living nature which holds our way of life.”

Juan José Relmucao is a Buenos Aires-based journalist, researcher and content creator who has been published in Vice News en Español, Atlas Obscura, Rest of World, and several media outlets in Argentina. In 2021 he was nominated for Thomson Foundation Young Journalist Award.

Editor's note: this article was updated on Jan 20 correcting that Orocobre is in Jujuy in Olaroz Salt Plaint, and Livent is in Catamarca, in Dead Mean Salt Plain.