Lula supporters' campaign efforts in this election cycle weakened Bolsonaro’s foothold among the Brazilian diaspora in the tri-state area. 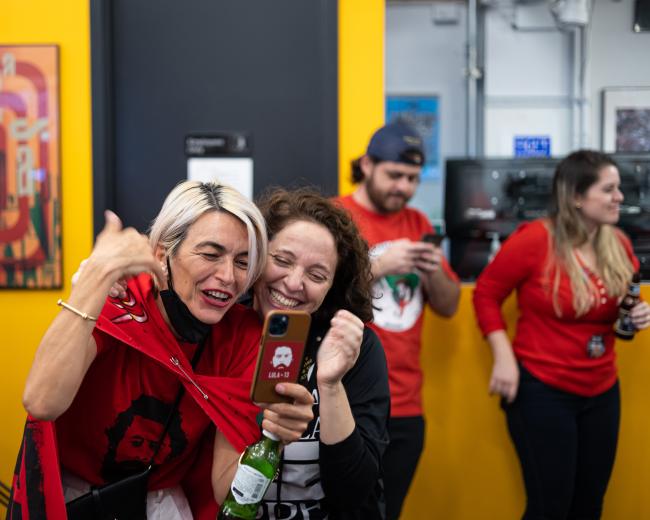 While the results of the second round of voting in Brazil’s presidential election trickled in, supporters of Brazil’s Partido dos Trabalhadores (Workers’ Party, PT) in New York City congregated around three big screen TVs spread across the People’s Forum in downtown Manhattan. Most wore the red and white colors of the PT, but a few favored the Brazilian green and gold, draping a flag across their shoulders. They waited, glued to the TVs, for a sign of victory.

The race between Lula, who campaigned on a platform of progressive environmental, economic, and social policies, and Bolsonaro, who ran on a socially conservative, disinformation-filled platform, occasionally gave way to violence between their respective supporters. It carried important implications for the future of democracy in Brazil and the country’s Amazon rainforest, which has suffered historic deforestation under Bolsonaro’s administration, thrusting the race into the international spotlight. For much of the race, polls showed Lula with a double digit lead over Bolsonaro. But after a surprisingly close race in round one, the two waged a bitter runoff, cultivating in the second round of voting on October 30th.

Ultimately, Lula’s margin of victory was less than two points. In such a tight race every vote counted. Few would expect grassroots activism by organizations abroad to impact the presidential race in Brazil, but the work of activist groups in the United States, whose members were among those watching at the People’s Forum, weakened Bolsonaro’s foothold amongst the Brazilian diaspora in the United States and helped apply pressure to foreign politicians to swiftly acknowledge the results of the election.

The political preferences of the Brazilian expat population in the United States are hard to gauge, partly because the size of the diaspora is difficult to estimate. Census data from 2020 puts the number of foreign-born Brazilians in the United States close to half a million, but Brazil’s Itamaraty, its Ministry of Foreign Affairs, acknowledges on their site that some Brazilian expats “are in irregular migratory situations and avoid participating in surveys and censuses.” This year, over 68,000 Brazilians living in the United States—only 14.5 percent of the census estimate—voted in the second round of the election, an incredibly low turnout for citizens who are required by law to vote.

Brazilians living abroad have few opportunities to make their voices heard: they can only vote for president and must do so in person. In the United States, there are ten cities where Brazilians cast their votes. Those living in Pennsylvania, New Jersey, and New York vote at a school in Midtown Manhattan. The penalty for failing to vote is minimal—a small fine and some paperwork would reinstate most voters—and the process of requesting a new voting location can be complicated, which may contribute to lower turnout amongst expats.

In past elections, the expat vote in cities with larger Brazilian populations, like Miami and Boston, has leaned more conservative, said Maxine Margolis, Professor Emerita at the University of Florida and author of the 2013 book Goodbye Brazil: Emigrés from the Land of Soccer and Samba. Despite its broader liberal reputation, New York City is no different. As recently as 2018, Brazilians in New York voted for Bolsonaro by a landslide.

“That’s a mystery,” said Margolis. Given the mixture of working and upper middle class Brazilians that tend to migrate to the city, she added, “I expect New York to be more progressive.”

One of the groups helping generate a progressive groundswell of support in New York during the presidential election was Defend Democracy in Brazil, a U.S.-based civil society comprised of artists and other working professionals who volunteer with the organization. The group was founded in 2016 in response to misconceptions about President Dilma Rousseff’s impeachment, and ratcheted up its work after Bolsonaro’s election in 2018, said Natalia de Campos, a performance artist and co-coordinator with the organization. While Bolsonaro was in office, they hosted rallies advocating for environmental protections and Indigenous rights, protested Bolsonaro’s speeches at the United Nations General Assembly in New York, and marched to the consulate in midtown Manhattan, where Indigenous Brazilians condemned Bolsonaro and his environmental politics. 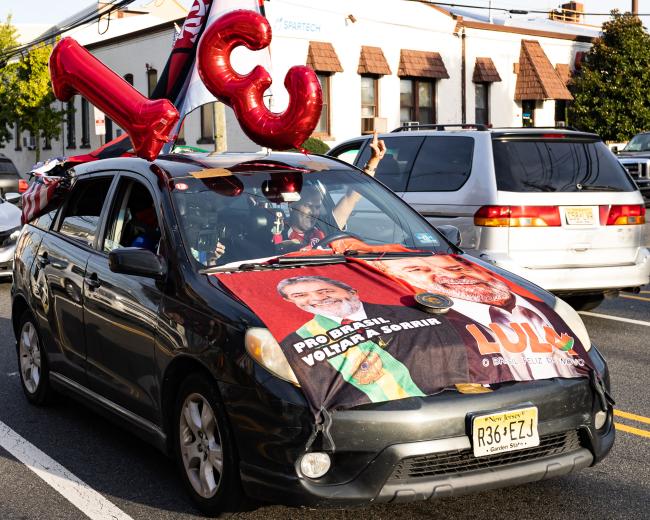 Defend Democracy’s efforts helped boost support for the left in New York City: first-round votes increased from 660 in 2018 to 4,716 in 2022, according to Brazil’s Supreme Electoral Court. Ahead of the second round, the group redoubled its efforts. They partnered with the Popular Struggle Committee (Comitê Popular de Luta NJ-NY-PA), a local branch of a larger political movement that originated in Brazil, to lead a car parade in Newark, an area with one of the highest concentrations of Brazilian immigrants in the northeast. At the parade, they distributed fliers and stickers in support of Lula. They also sent members with QR codes containing election and voting information to concerts across New York featuring Brazilian musicians, and members leveraged their own personal network to encourage abstainers from the first round to get involved in round two.

“People felt really alone,” said de Campos, in reference to some expats’ unwillingness to publicly express support for Lula in a pro-Bolsonaro environment. But once people saw Defend Democracy in Brazil’s and PSC’s activism in the streets and on social media, it helped motivate expats to get off the sidelines. “They just wanted to campaign,” said de Campos. “They just wanted to get rid of Bolsonaro.”

In the second round of voting in New York City, Bolsonaro was still the favorite, with 6,068 votes to Lula’s 5,331, his highest city total in the United States. Still Lula supporters had gained ground: the city had the third highest turnout among the ten polling locations in the United States and one of the closest margins. Bolsonaro won Miami and Boston, the only precincts with a higher turnout than New York, by a combined 113 points. Though Lula did not prevail in New York, local activism leading up the election resonated beyond the polling sites.

James N. Green, the National Co-Coordinator with the U.S. Network for Democracy in Brazil, another U.S.-based organization that raises awareness about the state of democracy in Brazil, said the protests against Bolsonaro by Defend Democracy in Brazil and other groups “were extremely important for engaging people internationally,” and helped underscore Bolsonaro’s poor standing with other countries. In the debates between Lula and Bolsoanro, “Lula made a point of the fact that Bolsonaro was internationally isolated,” said Green. “[Bolsonaro] didn’t have friends around the world, he wasn’t welcome—he just hurt Brazilian foreign policy.”

Green cannot say for sure that Bolsonaro’s negative international reputation changed the minds and votes of any Brazilian diaspora voters in the United States. But he noted that the U.S. Network for Democracy in Brazil and Defend Democracy in Brazil, which are affiliates, helped apply pressure to “U.S. senators and congresspeople to send a very clear message to the Biden administration that we believe the elections are going to be free and fair, the election process is going to be democratic, and that the Biden administration should immediately recognize the electoral votes.” He pointed to a resolution in the Senate, which won unanimous support and promised to “review and reconsider the relationship between the United States [and] any government that comes to power in Brazil through undemocratic means, including a military coup,” as evidence of the group’s success.

“I have no doubt at all that all of these things, coming from many different angles, convinced the Brazilian armed forces to remain neutral—which I think is essential in avoiding a coup.” Green said.

After Lula won, those gathered at The People’s Forum began hugging one another and cheering. A DJ started playing music and people danced round the room with one another. “It was a huge relief,” said de Campos, adding that she was so grateful for the work of everyone— in New York, the United States, and across the world— who had worked to oust Bolsonaro. She knew they were all celebrating together.

Since the election, members of Defend Democracy in Brazil have grown more hopeful for their country’s future. Thiago Szmrecsanyi, de Campos’ husband, a visual artist, and a member of Defend Democracy in Brazil thinks both the economy and foreign policy will improve. For her part, de Campos is excited by Lula’s campaign pledge to create a Ministry of Native Peoples, which she hopes will empower Indigenous people in Brazil, and help them safeguard their biomes, like the Amazon Rainforest.

Initially, Defend Democracy in Brazil considered itself an echo of the progressive political movements back home. But now, the organization is beginning to tackle issues specifically affecting Brazilians in the United States. In de Campos’s and Szmrecsanyi’s well-lit art studio on the Lower East Side, paintbrushes, drill heads, canvases, and wooden structures share the space with multicolored images of Lula and a sign that reads “#cancelBolsonaro.” Amongst some of the memorabilia from Defend Democracy in Brazil’s past events, the two spoke of focusing the organization’s energy on U.S media to encourage fair coverage of Lula’s presidency, and protesting U.S. corporations intertwined with oil and agribusiness in Brazil.

“We have a big target here, which is the Americas Society and Council of Americas,” said de Campos. The Americas Society and Council of Americas (AS/COA), which has its headquarters on Park Avenue in New York City,  promotes free trade and international business across the region. “Its members are large corporations that have always had interest in Brazil’s assets, namely Petrobras, the state oil giant, banking and financing industries, as well as mining—including in the Amazon region,” explained de Campos in a WhatsApp exchange.

Defend Democracy in Brazil has protested outside the AS/COA’s headquarters on Park Avenue on numerous occasions, said de Campos, and they plan to keep applying pressure as long as private interests continue to threaten environmental conservation. Now that Lula is president, there’s hope that environmental policies in Brazil will improve. Still, like with the campaign, every bit of activism helps in the fight to protect the environment. So, de Campos promised, “this work will continue.”

Jake Bolster is a freelance writer living in New York City, and a current student at Columbia University’s School of Journalism.