The Importance of Lula’s Presidency in an Increasingly Multipolar World

The inauguration of the leftist two-time former leader as Brazil’s president is a source of hope for social and environmental movements worldwide. 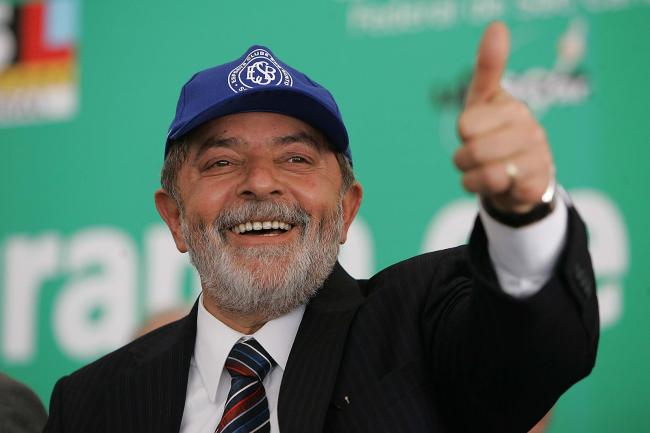 Despite the Brazilian Amazon’s importance to the global climate, Brazil’s lame-duck president, the far-right Jair Bolsonaro, was not one of the many heads-of-state to attend the United Nations Climate Conference COP27, which took place in November. Instead, Brazil’s president-elect, Luiz Inácio Lula da Silva of Brazil’s left-wing Workers’ Party (PT) attended and made headlines worldwide when he declared: “Brazil is back.”

Bolsonaro spent four years greenlighting the devastation of the Amazon—years in which deforestation shot up by 73 percent. After such destruction, the leadership of Lula, who oversaw a 67.6 percent reduction in deforestation during his previous two terms as president from 2003 to 2010, was welcome news to many at the event. Supporters punctuated his speech with gleeful chants of his phrase, “Brazil is back, Brazil is back.”

Yet Lula’s speech offered a more profound challenge to the assembled world leaders than merely an affirmation of Brazil’s renewed support of the COP27's environmental goals. Such affirmations are par for the course, and usually insincere; Bolsonaro promised zero deforestation by 2030 at the COP26 in 2021, something few took seriously. Lula’s speech also critiqued the global order, and implicitly, the priorities of many of the world leaders present.

“We spend trillions of dollars on wars that only bring destruction and death,” he said, “while 900 million people in the world don’t have anything to eat.” Lula also spoke of working towards a “peaceful world order based on dialogue, multilateralism, and multipolarity.”

We live in an era of deepening perils, including, as Lula noted in his speech, the apocalyptic return of the “threat of nuclear war.” The geopolitical order is also becoming more multipolar. That multipolarity could be characterized by dialogue and cooperation, or, instead, by violent conflict. We should take these statements by Lula seriously, and those of us concerned with a livable and just world should welcome Brazil’s renewed ambition in world affairs and Lula’s bid to push the increasingly multipolar order in the direction of dialogue.

On January 1, Lula was inaugurated as the president of Brazil, and the world is watching. There is, perhaps, no other living leader in either the Global South or North with the stature and track record to effectively make the case for a renewed focus on human wellbeing and survival in a world that is cascading deeper into inequality, environmental destruction, and war.

During his two previous terms as president, Lula’s leftist government created social policies that, when continued by his PT successor Dilma Rousseff, brought tens of millions out of poverty and significantly expanded the opportunities and rights of Brazil’s most marginalized and exploited. The PT governments also forged a foreign policy that sought independence from the United States—alienating many in Washington, but winning many admirers on the global Left and in the Global South.

Beyond the enthusiasm about Lula’s victory among much of the worldwide Left, many commentators in the United States and broader Anglophone press expressed gloominess about Lula’s prospects for success in a turbulent global economy and a divided Brazil, along with wariness about Lula’s global protagonism.

Consider a few articles from The New York Times.

One article was titled, “Brazil May not Stay Upright on a Shaky Global Stage.” It mentioned unnamed “financial analysts” who worried “that Brazil’s currency needs to get stronger, its interest rates need to come down and its growth needs to accelerate [but that] many of these things are out of its hands.”

Another article expressed uncertainty about Lula’s ability to govern at all, noting that Lula “does not yet have the votes he needs to begin the transformation of Brazil that he has promised or to block efforts to erode his authority.”

And amid war and the looming possibility of deepening U.S. involvement in that conflict, another New York Times piece noted points of tension between Lula and the United States, including Lula’s indirect criticisms of the U.S. president, and his statement that current conflicts “should be resolved peacefully and through negotiations,” a sentiment out-of-step with that dominant in Washington.

Although the mainstream U.S. press made nearly identical predictions after Lula’s victory in 2022, these statements are actually from just after Lula’s second round electoral victory in 2002. Much of the U.S. press after Lula’s 2022 victory has focused on the forbidding economic context for Lula’s ambitious social agenda and the likelihood of obstruction by Brazil’s divided congress, as with the New York Times article that declared, “His second try [at the presidency] looks far more difficult.”

This pessimistic tone shouldn’t come as a surprise. Lula’s previous administrations thwarted Washington’s attempt to extend a NAFTA-style neoliberalism across the Americas; shelved a (since renewed) deal for U.S. control of Brazil's Alcântara spaceport; defied the U.S. blockade of Iran; and, among other transgressions of U.S. dominance in Latin America, forged close ties with China, Russia, and South Africa by making the BRICS a functioning institution.

It is these ties to Russia and, especially, China that have most caused distress for the U.S. Right. But even mainstream, center-left U.S. media have been pessimistic about Lula’s prospects, despite their enthusiasm for the defeat of the Trump-allied Bolsonaro.

We don’t know what impediments and opportunities political and economic conditions will offer in the coming years any more than journalists did amid the gloom of 2002. But pessimism about challenges to global power relations that emanate from institutions close to the center of power should always be read critically.

Many skeptics point to Brazil’s divided Congress as a barrier to Lula’s success, as they did in 2002. However, using ideologically polarized U.S. politics as a model to understand Brazil obscures more than it reveals. Yes, the Brazilian far right is more powerful and vocal than they were in 2002, and this will pose many challenges for Lula’s presidency. However, much of Brazil’s Congress is not strongly committed to any political ideology and is willing to cut deals with the party in power, which is how Lula was able to successfully govern during his past two terms without a majority in Congress. This political flexibility is already on display. Even before coming to power, the president-elect and his team negotiated extensively with Congress to raise spending limits imposed in 2016 to allow for ambitious social spending.

On the topic of war, Lula has also proven critics wrong. At the beginning of this century, Lula was heavily criticized in the U.S. for his opposition to the wars in Afghanistan and Iraq, but the disastrous results of those wars have largely vindicated his call for dialogue over violence. Most readers today will probably agree that Lula was right in 2002, despite the stifling pro-war unanimity of the U.S. press at that time. By estimates that are probably too conservative, those wars killed nearly a million people and left countless destroyed lives in their wake.

Lula’s comments on the Ukraine War in 2022 are similar to those he made about the War on Terror in 2002. In a pre-election interview, Lula stated: “Putin shouldn’t have invaded Ukraine. But it’s not just Putin who is guilty. The U.S. and the EU are also guilty.” Naming NATO expansion near Russia’s borders and the possible incorporation of Ukraine as causes of the war, Lula called for dialogue, saying: “We need to reach an agreement. But people are encouraging [the war].” This caused consternation in a Washington that is funneling billions to Ukraine and sanctioning Russia, and it fueled fear-mongering headlines in U.S. media, such as Newsweek’s, “Lula’s Victory in Brazil Is Great News for Putin,” despite Lula’s clear criticism of Putin’s decision to go to war.

Lula is hardly alone in his perspective on the war. Foreign policy analysts as varied as Henry Kissinger, John Mearsheimer, and Noam Chomsky have been warning for years that NATO’s expansion would provoke something like the Ukraine War. Their assertions can be challenged and should be the subject of debate. But such debate is nearly impossible in the United States today; if NATO expansion is mentioned at all in mainstream U.S. media as a possible causal factor in the war, it is only to be dismissed as “disinformation.”

Russia’s invasion of Ukraine is a terrible crime. However, the stakes of this conflict are too high to allow the propaganda of either side to drown out the dialogue that Lula is calling for. With species-threatening nuclear war today a greater possibility than at any point since the Cold War—from which humanity escaped only by luck—we cannot afford the cartoonish worldview that turns every U.S. opponent into Hitler and the United States into the eternal savior. And in a Latin America that has suffered frequent and brutal U.S.-sponsored coups, such a worldview cannot be seriously entertained.

In any case, much of the world has a view of the Ukraine War that is closer to Lula’s than to Biden’s. Despite frequent assertions that the United States has the support of the “international community,” almost 90 percent of the world’s population live in countries not following the United States’ lead on the war.

Yet many of those leaders who have prominently distanced themselves from U.S. strategy in Ukraine are hardly paragons of the kind of social and environmental justice that Lula spoke of at the COP27. They include the far-right Narendra Modi of India; the brutal Mohammed bin Salman of Saudi Arabia; and the autocratic Recep Tayyip Erdoğan of (NATO member) Turkey.

The dissension of those figures from U.S. policy suggests some loss of the global hegemony that the United States held during the post-Cold War period and the world’s deepening multipolarity. And, to some, the dissension of much of the Global South from the world’s consolidating power blocks signals the emergence of a new non-aligned movement. Lula’s global respect and prominence make it possible that this non-alignment could help push the multipolar world towards dialogue, justice for the poor, and protection of the biosphere.

Hopes for the Future

As Lula steps into his next term as president, the standing he has worldwide offers hope that the fight for a world not characterized by war, inequality, and environmental destruction will have persuasive and powerful leadership.

If he is to succeed at his ambitious domestic and international agendas in the face of what will be significant opposition in Brazil, he will have to rely on the pressure and support of social movements, unions, and citizens. And if we are to flourish as a species, we will need to mount such organization and pressure globally, as well.

In his speech at the COP 27 Lula declared: “Brazil is ready to again join forces in the construction of a healthier planet, of a more just world, capable of welcoming with dignity the totality of its inhabitants —and not just a privileged minority.” We should all hope that he succeeds.

Sean T. Mitchell is associate professor of anthropology and director of Peace and Conflict Studies at Rutgers University, Newark. He writes about inequality politics in Brazil and elsewhere. He is the author of Constellations of Inequality: Space, Race and Utopia in Brazil (Chicago, 2017) and co-editor of Precarious Democracy: Ethnographies of Hope, Despair and Resistance in Brazil (Rutgers, 2021), among other works.