The Dominican government has always aligned itself with white supremacism, following the United States’ lead on immigration policies towards Haitians. 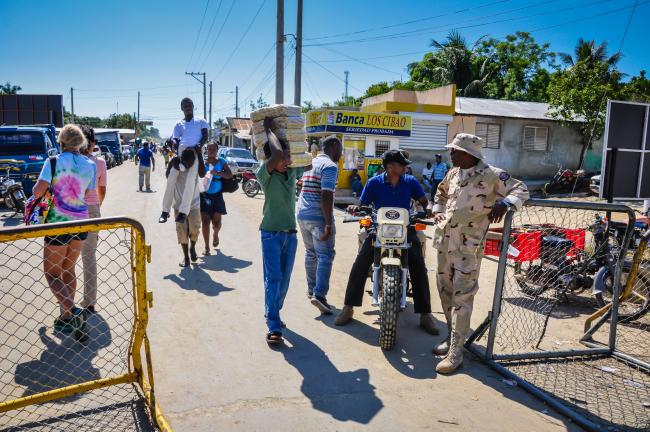 On February 20, as Dominicans began preparing to commemorate the 176th anniversary of the country’s independence from Haiti, the government began constructing a 14-mile border wall aimed at keeping Haitian migrants out. The border wall has been applauded by a large portion of the population, who see Haitians as invaders taking over land and resources and as threats to national culture, identity, and independence. Some have gone as far as to say the wall is the first step to make the Dominican Republic “Great Again.”

While the similarities in Dominican and U.S. anti-immigration language and the policies around border control—which include the use of drones and surveillance, detention centers, deportation, and the implementation of biometrics—are pretty obvious, the reasons and history behind them are less known. The reality is that when it comes to Haitian immigration, the Dominican Republic has always taken its cues from the United States.

The Dominican Republic obtained independence from Haiti in 1844 after a 22-year peaceful unification. While this was not the Dominican Republic's definitive independence—Spain annexed the territory from 1861-65—all Dominicans have been told a great national story that holds that Haitians invaded the country and oppressed Dominicans for two decades, raping their virgins, killing their children, and bringing barbarism to their side of the island. Consequently, Dominican national identity has developed in opposition to Haiti’s. The reality, however, is very different.

In 1804, Haiti became the second independent nation in the Americas and the first nation led by descendants of enslaved Africans. This was not such great news for the Euro-American world, especially for emerging superpowers like the United States that managed to become independent from Europe while continuing to operate with white supremacist colonial structures benefitting from the enslavement of Black people and the dispossession of Indigenous populations. The U.S. and Europe frowned upon Haiti and responded by not recognizing it as a free nation. They also imposed sanctions and economic embargos that bankrupted the young island nation.

Dominicans realized quickly that being associated with Haiti was not a good PR strategy if they wanted to succeed as a country, trade with the United States and Europe, and obtain political recognition. Thus, mid-nineteenth century politicians and the white elite intelligentsia began to work very hard at crafting a narrative that would differentiate the Dominican Republic from Haiti in the eyes of the world. The Dominican national project claimed Spanish language, Hispanic culture, religion, and racial difference as neither Black nor white. One thing that helped in crafting this national identity was that the United States perceived the Dominican Republic as the “better” of the two countries sharing the island of Hispaniola.

As early as 1845, one year after its independence from Haiti, an American commission gave the green light to Dominican self-governance while refusing to grant the same to Haiti. Though the United States viewed both countries as racially inferior and in need of “Big Brother”-type guidance, the Dominican Republic was perceived as less threatening and more progressive, in part because it had defined itself politically and culturally in contrast to Haiti.  This crafting of Dominican difference also led the United States to attempt to annex the DR in 1871, when the country was close to becoming a state under President Ulysses Grant’s administration. While the annexation project did not go through, in part due to Dominican opposition, U.S. presence on the island never ceased.

By 1880, U.S. corporations owned 30 percent of the island and had begun to exploit its natural resources, including sugar, wood, and minerals. By 1906, the United States had seized the custom house and in 1916, it occupied the island for eight years. After the occupation ended, the United States left in place a trained military and police force manned by none other than soon-to-be-worst-dictator-ever Rafael Leonidas Trujillo.

During the 1916-1924 U.S. military occupation, the Marines established, for the first time in the history of the island, a border security post. The occupation forces controlled transit between Haiti and DR and militarized the border. Additionally, the United States began to import Haitian labor to work on Dominican plantations in the U.S.-owned sugar cane industry; a practice that solidified Haitian labor as inferior.

After the occupation, as Trujillo took control of the country through violence and force, the project of border-making that the United States had started was solidified through violence and policies. In 1937, for example, the dictator ordered the military to “kill all Haitians” living on the very border where President Luis Abinader is currently building his wall. The order led, as Edward Paulino’s research shows, to the genocide of over 20,000 ethnic Haitians, many of them Dominican born. In tandem with the violence, Trujillo’s intellectual minions wrote books and drafted educational plans that would solidify the idea of “Haitian invasion.” School curricula began to teach about the 1844 independence and to install a culture of fear and hatred against Haitians that continued to be reinforced for decades at the hands of Trujillo’s political descendants.

Over the years, this fear of Haitians continued to be solidified by both policies and propaganda. One of the most recent and prominent examples is the Constitutional Court ruling 168-13, better known as La Sentencia (The Judgment). Issued on September 23, 2013, La Sentencia dictates that all persons born to “illegal immigrants” or “persons in transit” since 1929 will not be entitled to Dominican citizenship. It also retroactively stripped Dominican-born people in these categories of citizenship status, thus targeting people of Haitian descent in the Dominican Republic with deportation. The Dominican government claimed La Sentencia was part of an “expansive immigration reform” aimed at controlling undocumented immigration from Haiti, which increased by about 20 percent after the 2010 Haiti earthquake. In practice, this “immigration reform” rendered tens of thousands of Dominicans of Haitian descent stateless, as neither country on the island of Hispaniola acknowledges them as citizens.

This legislation was highly criticized globally for its cruelty and nonsensical retroactive component. Yet in that critique, there was very little attention to how La Sentencia fit into a larger global context of anti-Black xenophobia driving immigrant legislation across the globe. At the time, countries like Italy, Sweden, Chile, and France were all pursuing immigration reforms aimed at curtailing immigration and halting increases in their nations’ numbers of citizens of color, particularly Afrodescendants.

There is a popular Dominican saying: “when the U.S. has a cold, Dominicans get pneumonia.” Well, the United States does not have a mild cold, it has Covid-19, and it is also suffering from a chronic case of antiblackness, white supremacy, and xenophobia. The impact of U.S. policy and rhetoric—including antiblackness and xenophobia—which became normalized and globalized under Trump, paired with almost two centuries of U.S. and European-supported anti-Haitian antiblackness, has led to a culture of fear and hatred. The Dominican border wall and claims to make the DR “great again” echo present-day U.S. right- wing political rhetoric embodied in Trump’s depiction of migrants as economic leeches who “take our jobs” and moral corruptors who are “rapists” and “bring drugs and violence.”

This kind of “blame the immigrant” solution that has long existed but that Trump aggravated and popularized has become normalized in the Dominican Republic’s rhetoric and policy. As President Abinader figures out just what to do about the impact of the pandemic on the island’s economy, the anti-Black and anti-Haitian “blame the immigrant” narrative has come once more to the rescue of politicians. After all, if we blame the immigrant, we will not blame the president.

Lorgia García Peña is a scholar of Latinx Studies in the Department of Studies in Race, Colonialism and Diaspora at Tufts University and the co-founder of Freedom University. She is the author of the internationally acclaimed book The Borders of Dominicanidad: Race, Nation and Archives of Contradictions.

The author would like to note that the question of anti-Haitianism and antiblackness in the Dominican Republic has been at the center of Dominican Studies for the last 40 years. For suggestions for further reading, please see the resources listed at the bottom of "Dismantling Anti-Blackness Together."