The Guelaguetza is often a site of politics and protest. This year, one survivor denounced state complicity in the country’s rampant gender violence. 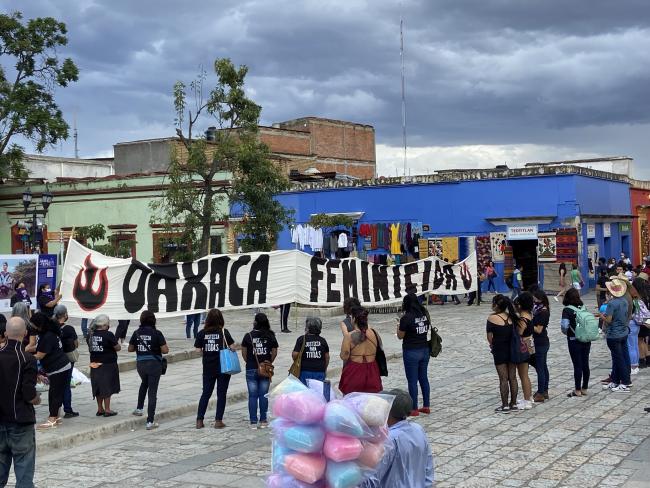 On July 25, María Elena Ríos Ortíz interrupted politics as usual in southern Mexico. Ríos, a saxophonist, activist, and survivor of an acid attack, rose from her seat in the auditorium that houses the state of Oaxaca’s annual music and dance festival, La Guelaguetza, and unfurled a banner that read, “Oaxaca Femicinida,” or “femicidal Oaxaca.” With these words, Ríos joined a tradition of feminist activism denouncing not only violence against women in Mexico, of which she is a survivor, but specifically the government’s complicity in such violence. State security officials hastily and aggressively removed Ríos from the auditorium. But her protest was viewed by thousands and quickly spread on social media. In subsequent days, activists expanded on her initial protest in street actions throughout downtown Oaxaca City.

Over the second half of July, tens of thousands of tourists from across Mexico and around the world gathered in Oaxaca City for this annual festival, officially called la Guelaguetza Fiesta de los Lunes del Cerro. La Guelaguetza features the impressive sounds and colors of Oaxaca’s numerous Indigenous communities. Each year, delegations representing the distinct regions of the state of Oaxaca converge on the capital to participate in concerts, parades, and exhibitions of arts and crafts. State pageantry and government rhetoric celebrate the 16 officially recognized Indigenous peoples of the state, such as the Zapotec, Mixtec, and Chatino.

However, what many tourists do not realize, and what Ríos’s protests reminds us of, is that the Guelaguetza is also a political battleground where different visions for Mexican society compete.

The Fight for Visibility and Accountability

Located in southeastern Mexico, Oaxaca forms part of the country’s poorest regions, with both high levels of poverty and out-migration. Indeed, over the course of the 20th century, a Oaxacan diaspora has spread across North America, spanning the western United States and into British Columbia, as Oaxacans have sought to support themselves and their families. The Guelaguetza originated in Mexico’s postrevolutionary history, when Oaxacan state leaders invoked the area’s Indigenous identity as a unifying element in local politics. From 1932 on, officials have organized the Guelaguetza as state pageantry, ostensibly celebrating Indigenous traditions and culture while paying homage to the state governor, the official host of the festival.

Ríos’s protest brilliantly took advantage of this state spectacle to make visible the violence against women that all too often goes unspoken in Mexico. In 2019, Ríos was the victim of an acid attack that left her permanently disfigured. That attack, which took place in the Mixteca region of Oaxaca where Ríos is from, was allegedly organized by her ex-partner, Juan Antonio Vera Carrizal, a former congressman affiliated with the Institutional Revolutionary Party (PRI), and his associates. While three of the men have faced jail time, one remains at large. Ríos has pointed out that the Mexican justice system frequently revictimizes survivors like her as they face innumerable obstacles in seeking to hold perpetrators accountable.

“Today,” Ríos wrote on Twitter after her protest, “…I name all my sisters who are victims of femicide and survivors, who struggle every day to find justice in #OaxacaFemicida. I was beaten down by state police and the private security guards of [Oaxaca governor Alejandro Murat (PRI)], accomplice of my aggressors.”

Since 2006, when violence began to skyrocket with the launch of the country’s war on drugs, women have gone missing or been murdered in the tens of thousands, leading Mexican activists to coin and popularize the term “femicide.” By then, a spate of femicides in Ciudad Juárez beginning the 1990s had concentrated attention on northern border cities. But the violence soon spiraled out of control across the country.

Finally, in 2012, after much organizing by activists, Mexican federal law codified femicide as a crime defined as the murder of a woman because of her gender. While media attention has continued to focus on violence against women in the north of the country, since 2016 over 600 women have been murdered and more than 1,500 have gone missing in Oaxaca alone. Most of these cases have gone unsolved; victims’ families rarely receive justice or answers regarding the whereabouts of their missing loved ones.

As Cristina Rivera Garza, a Mexican writer and critic who lost her own sister to this violence, describes, “Rampant impunity, corruption at all levels of government, and a strongly held patriarchal ideology…fueled the ceaseless murdering of women from all walks of life.” In the last few years, a diversity of feminists and activists have taken to the streets in Mexico, decrying both individual cases of femicide (often perpetrated by high-level government officials) as well as officials’ lack of action in addressing the crisis. Their activism has been so visible that Mexican president Andres Manuel López Obrador was forced to respond to the protests, though he dismissed their criticisms as being manipulated by his political opponents. Ríos’s protest drew on the confidence that this rejuvenated feminist activism has built in the country.

The violent rejection of Ríos from the Guelaguetza auditorium as dozens of security officials swarmed and dragged her outside, stood in stark contrast to the treatment of one high-profile attendee, former defense secretary General Salvador Cienfuegos Zepeda. The general, who was arrested in the United States in 2020 on money laundering charges and has been convincingly accused of links with drug traffickers, was seen at the Guelaguetza throwing out gifts to the gathered crowds. Cienfuegos has come to symbolize the corruption associated with former president Enrique Peña Nieto (2012-2018) and the links between the Mexican state and drug trafficking. In an op-ed in the Washington Post, Ríos summarized Cienfuegos's presence at the event as “surrealism disguised as folklore.” Once again, the Guelaguetza appears as a commercial event that politicians and other figures use to burnish their public profiles.

The Guelaguetza is also clearly an example of the commodification of Indigenous culture. Indigenous dancers and musicians perform for an audience that have often paid steep prices, far out of reach for ordinary Oaxacans. These cultural performances are sold as a product and used as a backdrop for politicians to advance their careers. Oaxacan governor Alejandro Murat, for instance, is believed to have presidential ambitions.

This cultural commodification is not unique to the Guelaguetza. Oaxaca’s other important festival, Día de los Muertos, is often turned into a commodity, as seen in the popular 2017 Disney/Pixar film Coco. Or consider the Oaxacan spirit mezcal, which has much spiritual meaning in Indigenous communities but is now an international sensation sold at exorbitant prices and marketed by the stars of the television series Breaking Bad.

Yet Ríos’s protest also reminds us of the resistance to these dynamics. For decades, Oaxacans have used the Guelaguetza as a key site of politics and a place to make demands on the state. They have at times fought to be included in the festival. Such is the case of Afro-Mexican communities on Oaxaca’s Pacific coast who had been excluded from the festival until the early 2000s. These communities successfully fought for a place in the program and the cultural representation it affords. At other times, activists have organized effective opposition to the festival. In 2006, when striking teachers and their allies came close to overthrowing then-governor Ulises Ruiz Ortiz, they successfully boycotted the official Guelaguetza, forcing the government to cancel it. The movement then proceeded to organize their own festival, the Guelaguetza Popular.

The Guelaguetza also invites us to consider other ways of being in the world. Those who speak out, like Ríos, stand in a rich tradition of Indigenous protest. The word “guelaguetza,” is Zapotec, one of Oaxaca’s 16 officially recognized Indigenous languages, and roughly translates to reciprocity and mutual aid. The term reflects the notion, key to many Indigenous worldviews, that we all have a reciprocal relationship with each other, and with the natural world. As the Zapotec intellectual Jaime Martínez Luna put it recently, the festival is an opportunity “to know that there are alternative ways of being in the world, ways that oppose the notion that life is just about profits.” And in Oaxaca one sees this politics put in practice daily through communal governing structures, agricultural cooperatives, and education initiatives.

Mexico’s bleak reality of rampant femicide, exacerbated by the violence of the drug trade, is further compounded by the lack of justice in the country. But Ríos's protest, and that of many others, show us the potential for a world based on the values of reciprocity and mutual aid. In this sense, Oaxaca offers us all hope.

A. S. Dillingham teaches history at Arizona State University and is the author of Oaxaca Resurgent: Indigeneity, Development, and Inequality in Twentieth-Century Mexico.