Violence Increases Against Migrants and Their Advocates in Mexico

A human rights caravan arrived to Mexico City on August 1 to demand that the Mexican government put a stop to the violence against undocumented migrants. Thousands on their way to the United States are kidnapped in Mexico each year, and recently it’s gotten worse. Violence has increased against both migrants and the advocates who provide them with basic services along their route. 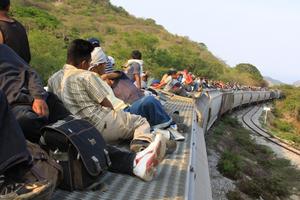 Passing through Mexico as an undocumented migrant has never been easy. The journey often involves exposure to the elements, hunger, confined conditions, and contact with corrupt officials. In recent years, kidnappings for ransom have been added to the list. According to Mexico's Human Rights Commission, at least 20,000 migrants are kidnapped in Mexico each year. As organized crime groups have muscled into the business of controlling migrant routes in Mexico, pressure has also increased on those who provide basic services and protection.

Last year, the Interamerican Commission on Human Rights issued protection orders for Father Pedro Pantoja, a Catholic priest who runs a migrant shelter in the northern Mexico city of Saltillo. Two international volunteers were recently forced to leave due to the deteriorating security at the shelter.

“Organized criminals have come inside of our migrant shelter,” said Pantoja. “There were no police patrol cars outside as part of the protection orders. We see it not only as incompetence, but disregard. The authorities couldn't care less about the disaster, the social cruelty to which these people are subjected.”

Father Pedro PantojaAccording to Pantoja, there is no longer a distinction between victims and human rights defenders. Both are subjected to the same attacks, and the government does nothing as the attacks increase in frequency.

“There's not only silence, but also zero action, inefficacy, and a total lack of respect for the lives of these people,” said Pantoja.

The Northern Mexico state of Tamaulipas is one of the hot spots—along with Veracruz and Tabasco—for migrant kidnappings. Last year, seventy-two migrants were massacred here. Unfortunately, violent threats and a lack of police protection forced a migrant shelter in the Tamaulipas border city of Nuevo Laredo to close its doors. These are the very institutions which often take on the role of documenting the kidnappings and providing basic services.

“We don't just give food and water and first aid to the migrants, we also document the human rights violations they suffer,” said Friar Tomás González from the southern city of Tenosique, Tabasco near the border with Guatemala. “Oftentimes immigration authorities are identified as the culprits. So our alarms alert the authorities and irritate organized criminals . . . and it comes back on us. Not only have organized criminals intimidated some defenders of migrants' human rights, but so have some authorities.” 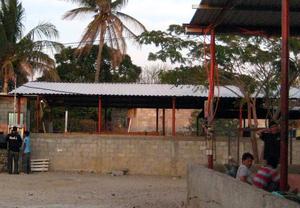 Shelter in Ciudad Ixtepec, Oaxaca (Shannon Young)Accusations of government inaction—or even complicity—in crimes against migrants are nothing new. Shelter workers have been documenting them for years. But what has changed is the frequency with which the religious figures that run the shelters have been targeted. According to Alberto Herrera, director of Amnesty International Mexico, the root of the problem is “the lack of efficiency, capability, and will to prosecute those responsible for these crimes.”

“The rates of impunity are so high that they send a message to society, in general, that these types of crimes can continue to happen in Mexico with little risk that those responsible will be held accountable,” said Herrera.

The issue of impunity isn't just limited to crimes against migrants. Only 5% of all homicides in Mexico are prosecuted. Impunity also stretches to those who harm people who document crimes and defend victims. Over the past five years dozens of human rights defenders and journalists have been killed in Mexico and history indicates that these crimes will also go unpunished.

Shannon Young is a reporter based in Oaxaca, Mexico. Her work can be found on her blog, southnotes.org. You can hear her radio report for Free Speech Radio News on this same issue, here.