Guatemalans are appalled over new revelations that from 1946 to 1948 U.S. medical researchers infected more than a thousand non-consenting Guatemalans with venereal diseases. The doctors who administered similar experiments on African-American sharecroppers in 1932 had told their research subjects simply that they were being treated for “bad blood.” And bad blood is what has been generated—or simply augmented—by this grim episode in the history of U.S.-Guatemala relations.

It must have been an uncomfortable moment, to put it mildly, for Arnold Chacón. 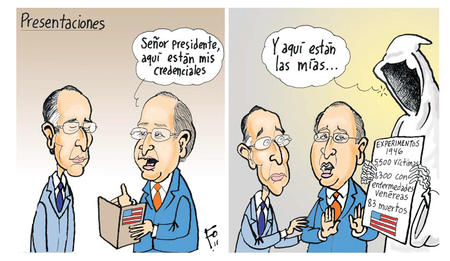 Chacón, just appointed U.S. ambassador to Guatemala, took office on August 29, but the story was buried deep in the local newspapers. Their headlines were instead busy roaring indignation over the appalling new revelations that from 1946 to 1948 U.S. medical researchers infected more than a thousand non-consenting Guatemalans with venereal diseases. Inspired by the overlap of events, the editorial cartoonist at the popular daily Prensa Libre lampooned Chacón’s swearing-in ceremony. In the cartoon, the ambassador presents his credentials to Guatemalan president Álvaro Colom; behind him, the Grim Reaper offers credentials of his own, listed on a placard stamped with the stars and stripes: “1946 Experiments, 5500 victims, 1300 [infected] with venereal diseases, 86 dead.”

By now, the outlines of the story are well known. In October 2010, Wellesley history professor Susan Reverby, a specialist in ethics and public health, was conducting research in the personal papers of U.S. Public Health Service doctor John C. Cutler when she discovered evidence of Cutler’s hitherto unknown experiments in Guatemala. In an echo of the Tuskegee experiments in which Cutler also participated, the “research” in Guatemala involved infecting prison inmates, asylum-bound psychiatric patients, and sex workers with syphilis, gonorrhea, and chancroid, ostensibly to investigate the efficacy of penicillin treatment. Over the course of two years, U.S. taxpayer-funded Public Health Service doctors injected syphilis into the eyes, genitals, and spines of some of the weakest members of Guatemalan society, without ever explaining their intentions or securing consent.

Reverby’s revelations made headlines around the world, nauseated Guatemalans, and impelled the Obama administration to formally apologize in the name of the United States for the “reprehensible,” “abhorrent” experiments. Obama also convened a Presidential Commission for the Study of Bioethical Issues, directing its appointees to further investigate the case.

The initial facts were horrifying unto themselves, but lurid new details emerged in hearings before the commission on August 29 and 30. One mental patient, Berta, was already dying from her deliberately induced syphilis infection when Cutler inserted pus from a male gonorrhea victim into her eyes, urethra, and rectum; she died shortly after. Doctors injected syphilis into the skulls of multiple epileptic women living in an insane asylum, to induce infection in the brain. Prostitutes were infected with syphilis and sent into prisons to transmit the disease to inmates; when this failed, the infection was directly administered via cuts on prisoners’ faces and penises. Only about 700 of those infected received any kind of treatment. We know that the patients resisted participating, but the procedures continued. As University of Virginia bioethicist John D. Arras, who served on the commission, commented, “the attitude toward the Guatemalan people was pretty much what you’d expect if they were doing research on rabbits.”

The notion that U.S. technocrats regard Guatemalans, and other citizens of the Global South, as animals or test subjects for experiments is rooted in two centuries’ worth of U.S. policy in the Americas. From the forced sterilizations of Puerto Rican, Mexican-American, African-American, and Native American women (alongside criminals and the mentally ill) within the United States, to the imposition of experimental economic theory by the Chicago Boys in Augusto Pinochet’s Chile, the region has long served as a laboratory for bolstering U.S. hegemony—with the hemisphere’s disempowered peoples as its guinea pigs.

Over the past century, Guatemala has found itself to be a frequent object of unwanted imperial attentions from el Norte, with the United Fruit Company’s predatory capitalism, the CIA-sponsored 1954 coup against democratically elected president Jacobo Árbenz, and direct U.S. support for the murderous 1960-1996 counterinsurgency war waged by successive military regimes.

U.S. news reports used words like “shocked” and “scandalized” to describe the outcry over the disclosure, but given this sordid history, it is worth reflecting on why we are so surprised that U.S. doctors conducted these disgusting, bogus experiments in Guatemala. It should always enrage us, but that foreigners with their own agendas cared little for the lives of ordinary Guatemalans should shock only those ignorant of the recent past and the political present. Even though U.S. ethical protocols for medical experimentation have been strengthened in the years since Cutler’s forays into Guatemalan asylums and American prisons, we know that the Global South still plays host to all manner of dodgy U.S. and European drug trials, perhaps most famously dramatized in the film adaptation of John LeCarré’s book, The Constant Gardener.

Guatemalan commentators, for their part, greeted Reverby’s announcement, and the subsequent unveiling of the story, with all the justified hurt and ire one would expect. They called Cutler “the American Mengele,” assailing his “unscrupulous ambition” and what one observer described as the larger logic of white supremacy that had enabled it. They lamented with horror that the U.S. imperial gaze had led its scientists to ”use Guatemalans like laboratory rats” and to treat them, in the pained words of Guatemalan journalist Dina Fernández, “as though we were an inferior and disposable race.” They urged legal redress and compensation. The Colom administration has attempted to locate survivors of the study, and has appointed its own presidential fact-finding commission, which is expected to release its findings in the coming months. The doctors administering the Tuskegee syphilis experiment on African-American sharecroppers in 1932 had told their research subjects simply that they were being treated for “bad blood.” And bad blood is what has been generated—or simply augmented—by this grim episode in the history of U.S.-Guatemala relations.

It is important, however, that our anger and shame over the Guatemalan syphilis experiments neither remain restricted to this one incident, nor dwell exclusively on the wrongs of the past. We should be incensed, and always aghast, at the far more violent and wide-ranging U.S. interventions that brought a bloody end to Guatemala’s 1944-1954 democratic opening and took generations of young progressives and idealists down with it. And we should be ever-vigilant, and just as shocked, about how our home countries and corporations conduct themselves in present-day Guatemala and beyond. An especially glaring example of contemporary misconduct is that of the U.S. and Canadian mining companies engaged in mineral extraction in Guatemala’s highlands. Similarly, we must be sure to notice and reward those individuals and agencies that do, from abroad, work toward the kind of future that Guatemalans want. The U.S. Department of Justice, for example, has been actively seeking to apprehend, prosecute, and extradite Guatemalan war criminals hiding in the United States. It is one thing to wring our hands about the past; it is another to inveigh upon the present.

In the meantime, Guatemalans have their own uncomfortable questions to answer about the Cutler experiments, and the active collaboration of Guatemalan doctors, like Julio Bianchi and the U.S.-trained Juan Funes, in their execution. It was Funes who volunteered to recruit sex workers for the study and who enthusiastically approved his country as its site. Though no evidence has yet surfaced indicating that then president Juan José Arévalo had any knowledge of the syphilis project, the Health Minister, other high-ranking officials, and key government institutions did, and the fact that it transpired during the country’s Revolutionary Spring has perhaps been the study’s most startling revelation. Above all, this whole gruesome episode speaks most eloquently to the deeply ingrained disregard in which the period’s white élites—both in Guatemala and in the United States—held people of color, the mentally ill, the physically disabled, the incarcerated, and the poor. These still-extant prejudices and their consequences today should be the real targets of our outrage, and of our action.

Kirsten Weld is the Florence Levy Kay Fellow in Latin American History at Brandeis University. She is currently writing two books about Guatemala.