International Aid and the Neoliberal Ethos in the Tent Camps of Port-au-Prince, Haiti

Today marks the 2-year anniversary of the 2010 earthquake in Haiti. For a year and a half, the International Organization for Migration has coordinated several communications projects aimed at empowering Haitian tent camp residents. There is nothing wrong with encouraging people to take charge of their lives, but these projects are placing the responsibility for aid failures on the Haitian people while promoting a neoliberal “do it yourself” ideology.

This article was published in the November/December 2011 issue of NACLA Report on the Americas, "Latino Student Movements: Defending Education." It is an excerpt from Tectonic Shifts: Haiti Since the Earthquake, a collection of essays released this month from Kumarian Press, edited by Mark Schuller and NACLA editor Pablo Morales. Published with permission.

In the neoliberal worldview, the ideal state is driven by and protects market interests. As such, populations must be discouraged from appealing to the state as a guarantor of basic medical care, education, housing, security, and so on. Instead, personal responsibility, avoiding risk, and individual rather than collective solutions define the ideal relationship between the neoliberal state and the individual.1 Haiti has been called the Republic of NGOs, with numerous nongovernmental organizations replacing the state as the provider of basic services. As neoliberal entities themselves, NGOs inevitably reproduce and disseminate the values that characterize the ideal neoliberal state and citizenry. These values are well represented in the communications and democracy-promotion projects of the International Organization for Migration (IOM), the international NGO responsible for coordinating aid to the hundreds of tent camps in the quake zone.

The stated goal of the IOM communications project is to empower Haiti’s internally displaced persons (IDPs) by giving them better access to information, better tools for communicating their needs to the NGOs that serve them, and ultimately supporting and enhancing democratic participation. The IOM’s principal communications project, titled Chimen Lakay (The Way Back Home), began in the summer of 2010 and targeted the 1.3 million IDPs left homeless by the earthquake. Today, as the IDPs are being dispersed, often through forced evictions, Chimen Lakay is targeting the population more broadly. The IOM’s communications project includes an illustrated newspaper (which to date has a distribution of 500,000); community and commercial radio broadcasts recorded in the tent camps; Radyo Tap-Tap, a radio-style soap opera played on tap-taps (Haiti’s buses or pickup trucks that serve as shared taxis); open-source mapping; citizen journalism; and a program called Voices of the Voiceless, which placed informational kiosks and suggestion boxes in about 150 tent camps managed by the IOM. All of these programs work with a Haitian crisis response organization, Noula, which maps and tracks gaps in services and requests for assistance communicated through the suggestion boxes, SMS messaging, and a telephone hotline.2 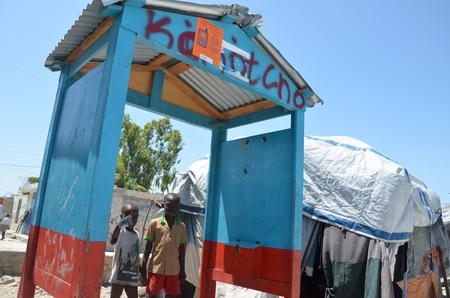 A Voices of the Voiceless kiosk in Cité Soleil, Haiti (credit: Leonard Doyle) The newspaper Chimen Lakay transmits information on cholera prevention and hurricane preparedness—uncontroversial content nonetheless buttressed by an overall message of personal responsibility, do-it-yourself, self-management, and even “self-help,” as one sympathetic observer describes it.3 The editorial that inaugurated the first issue indeed stated that the message the paper has to offer tent camp residents is one of “taking care of yourself.” It is a fitting way to usher in an issue that also does its best to provide positive stories of camp relocations: “Deplasman an ka on bon bagay!” “Displacement can be a good thing!” The editorial councils its IDP readership not to lose touch with the mode of conduct exemplified in the Haitian proverb Met kò ki veye ko (I’m responsible for myself, for my body).4 IDPs are then instructed “to begin thinking about how [they] will manage to get a small house that is more solid than a tent and that [they] can call [their] own.”5 It tells readers that they need to remember how they lived before the earthquake, which was “by virtue of our perseverance” (sou fòs kouraj nou). Finally, the editorial warns, “If people don’t decide to fight for themselves to change their own lives, nothing will change, even if the [humanitarian] organizations and the entire Haitian state were to spend the next thousand years giving out aid.”6

There is, of course, nothing inherently wrong with encouraging people to be active and take charge of their lives. All the same, Chimen Lakay’s editorializing must be viewed in its very specific and troubling context. The IOM distributed the first issue of Chimen Lakay in July 2010, when most of the camps had never received tents (people lived under tarps and bedsheets), only 40% had access to drinking water, and 30% had never had toilets. Only 20% had access to educational or health-care facilities.7 Alongside NGOs’ logistical errors and the outright wasting of resources, the promised aid money was not materializing. By July 2010, a mere 2% of the $10 billion pledged by the international community had been spent on relief efforts.8 Furthermore, while the U.S. Congress passed a $1.5 billion aid bill in May 2010, Haitians had to await the one-year anniversary of the quake before seeing any disbursements, the result of bureaucratic red tape and U.S. mistrust of the Haitian government. As of this writing, there is still no plan to build public housing for homeless earthquake survivors and no plan for dealing with the scores of renters who have no viable “way back home.” Forced evictions are furthermore an ongoing crisis.

In this context of aid failure, Chimen Lakay’s counseling of self-reliance becomes an ideological effort to form citizen-subjects who take personal responsibility for the ills that afflict them and who don’t expect aid from the state or any other institution. “Do it yourself ” is an ethic and ideal that originates in the Global North’s neoliberal turn, where dwindling state support for child care, health care, and other services means that such labor falls upon unpaid (or very poorly paid) individuals. In Haiti, there has never been a fully functioning welfare state, and the majority population has always been forced to “do it yourself” if anything is to be done at all. Nonetheless, using traditional Haitian proverbs like Mèt kò veye kò naturalizes and universalizes donors’ own neoliberal ideologies. It also places the onus for aid failures on the Haitian people. In the summer of 2011, as NGOs were beginning to pull out of the camps, a large humanitarian organization attempted to commission a short informational film for its tent camp screenings provisionally titled How to Clean Up Your Own Camp.

The writers and editors of Chimen Lakay are well-intentioned pragmatists seeking to disseminate public health information and crisis response quickly and efficiently. When faced with a growing lack of services, common sense would dictate that they disseminate self-help messages, like clean your own camp. But such “common sense,” as Antonio Gramsci described, is the mechanism by which dominance and inequality are reproduced, and in this sense, Chemin Lakay unwittingly reproduces the dominant ideology of neoliberalism.

It must also be noted that Chimen Lakay receives its funding from the large NGOs and donor organizations. The program’s focus on “disaster risk reduction” (DRR), for example, was not an editorial decision, but a fiscal one. As part of its DRR project, USAID helped foot the bill for the most recent issue of Chimen Lakay on hurricane preparedness, while the newspaper’s first issue, more focused on IDP self-help, was jointly funded by the UN peacekeeping force in Haiti, MINUSTAH, and the IOM. It is hard to imagine USAID or any other donor funding an issue devoted to, for example, IDP legal rights. In this sense, Chimen Lakay, whose creators hope it will eventually became a true forum for citizen journalism, remains an organ of the international aid apparatus. Its content determined by international aid priorities, the print version is not yet a newspaper at all, though it is currently the most widely distributed Creole-language publication in the country.

The Voices of the Voiceless program comprised the other half of the IOM’s “two-way” communication and democracy promotion efforts. At the time of this writing, the program is being phased out and the IOM is hoping to convince another agency to adapt the suggestion boxes to neighborhoods. Voices promised, as its name suggests, to give the silenced a chance to speak out and have their stories heard. Most of the requests for assistance were entered into a Noula database. Letters were selected to be read on the Radyo Tap-Tap radio broadcast or were printed in the newspaper. Letter writers asked for food, schooling for their children, new tents, and most often, the Holy Grail: a job. In the fourth issue of Chimen Lakay, camp resident Maculène R. asked for “a little help” in the Ratima camp. “We have never received anything,” she writes, “except this little water they give us. In my name, I ask you for a little aid, just one more time.”9

The director of the IOM communications program, Leonard Doyle, likens these written communiqués to “letters to the editor.” Indeed, Voices of the Voiceless is part of a much larger trend that views self-expression and self-revelation as an end in itself. All the same, letter writers communicate pointed and specific requests, and it is clear that they expect a response; yet the IOM only attempts to ensure responses to letters that report rapes or other violent acts. An experimental initiative, Voice of the Voiceless will depend upon NGO interest in the “product,” which is direct response from aid recipients. Suggesting the conflicting goals of improving NGO-recipient communication vs. promoting democracy, in an interview IOM director Luca dall’Oglio, specifically referring to the Chimen Lakay radio show, opined, “of course lots of people want to complain about their situation, but it’s also true that they are beginning to understand the merits of communication in a democracy.”10

Dall’Oglio’s definition of “democracy” is a neoliberal one that corresponds to Jodi Dean’s analyses in Democracy and Other Neoliberal Fantasies. For Dean, the democratizing potential of the Internet and other new communications technologies—which, like Voices of the Voiceless, extol the virtues of “self-revelation, [and] the expression of intense and or intimate feelings”—is limited by the fact that no one has a responsibility to respond. Such messages become part of the circulation of content in what she terms “communicative capitalism.” According to Dean, communicative capitalism is dangerous because it masquerades as democratic participation, thus disavowing “a more fundamental political disempowerment.”11

As an employee of the IOM communications project told me, “[Chimen Lakay] is a way to let people vent. If they don’t vent this way, they will vent in ways that are far more dangerous.” Indeed, collective organized responses to the miseries of post-earthquake Haiti have been equated with criminality and unruliness. As of this writing, IOM’s communications unit is faced with the difficult task of assisting government-mandated efforts to relocate IDPs back to permanent structures. We can only hope that the exercise of communicating real demands to an increasingly unresponsive international NGO system will not exhaust the political energies of the hundreds of thousands of tent camp residents who will need to rally all of their forces if they are to continue to resist unfulfilled promises, threats of eviction, violence, and an uncertain future.

Valerie Kaussen is Associate Professor of French and Film Studies at the University of Missouri. She would like to thank Leonard Doyle and the staff of the IOM Communications unit for their openness and generosity.

1. Wendy Brown, “Neoliberalism and the End of Liberal Democracy,” in Edgework: Critical Essays on Knowledge and Politics (Princeton University Press, 2005), 37–59, 42.