A Letter to the DREAM Movement

I have come to a deeply painful decision: I can no longer in good political conscience support the DREAM Act because the essence of a beautiful dream has been detained by a colonial nightmare seeking to fund and fuel the U.S. empire machine.

This article was published in the November/December 2011 issue of NACLA Report on the Americas, "Latino Student Movements: Defending Education."

Over a year after students began resisting SB 1070 in Arizona and after the DREAM movement reignited the national migrant justice movement, why does youth organizing and civil disobedience still matter?

As clear as it was then, our community’s emancipation won’t come only through electoral politics. Both Democrat and Republican parties have failed the Latino community miserably. 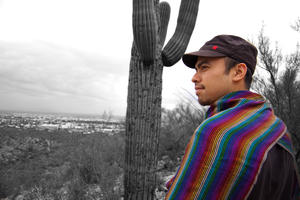 Raúl Alcaraz Ochoa (credit: Chris Summitt) Direct actions led by undocumented youth and youth of color are the only reasons that politicians have even discussed immigration reform and the DREAM Act. Throughout history, youth have been at the forefront of revolutionary social transformations, and our time is no exception. Undocumented youth and youth of color are at the forefront of the hope we can truly believe in.

Our community has waited long enough.

Let’s take back our power. The answer is not in party politics; it’s inside of us, in our mothers and fathers who sacrificed everything, in our grandparents who struggled yesterday, and in the youth who struggle today and tomorrow. We have the power to rise and create a healthy reality based on dignity and respect for all. When will we declare, “Ya Basta!” (Enough!) with all the rage and love in our hearts?

The following is a painful letter I wrote in September 2010, asserting my long-standing concerns over the Dream Act. To clarify, I am not a DREAM student. Take this analysis as a reflection of the ideological diversity existing within a migrant justice movement that is sure to continue paving the road toward the profound change this country so urgently needs.

I have supported the DREAM Act, despite my critiques and concerns over the military service component. In fact, I was one of the arrestees at the sit-in at John McCain’s office in Tucson, Arizona, in May 2010—an act of civil disobedience in which four brave undocumented students risked deportation and put the DREAM Movement back on the national political stage. I made peace with my participation because I felt I was supporting the self-determination of a movement led by undocumented youth and I felt we could subvert the component that was to feed undocumented youth into the military pipeline if we developed a plan to support youth to the college pathway.

First, let me say that I applaud and admire the tireless work you have all done for the past 10 years. Your commitment and dedication parallels giant student movements of the civil rights era. Your persistence in organizing even when the world turned its back on you is inspiring; your creativity in tactics, visuals and media strategy is amazing. Your movement gives hope to hundreds of students I have come across here in Arizona and beyond. It is because of your grassroots efforts—not the politicians’ nor the national Hispanic organizations’—that the dream is still alive and has come this far. As an organizer with permanent resident status privilege, let me assert that your cause for access to college and path to legalization is just. No one can tell you that what you are fighting for is wrong.

With that said, I want to share how I am deeply appalled and outraged at how Washington politics are manipulating and co-opting the dream. I understand that some folks may say, “We just want the DREAM Act to pass regardless,” but it is critical to examine the political context that surrounds the DREAM Act in its current state. It is disturbing to see how Democrats are attaching our community’s dreams for education/legalization to a defense appropriations bill. This is grotesque in a number of ways:

1. Democrats are using the DREAM Act as a political stunt to appeal to Latino voters for the November elections because it is seen as less threatening than a broad immigration reform. The Democrats have the political will to recently unite and pass a border militarization bill in a matter of hours ($600 million!), yet they won’t pass a broader immigration reform? And now they are up for the DREAM Act? I’m glad they feel the pressure of the Latino voting bloc, but they obviously do not care about our lives, they only seek to secure their seats in November—which by the way look very jeopardized if they don’t move quickly to energize their “base.” They are also seeking to secure the gay vote with the gradual repeal of the “Don’t Ask, Don’t Tell” policy as part of this same defense bill. All in all, insincere, token political gestures only serve to stall real justice.

2. Democrats are telling me that if I support access to education for all my people, I must also support the U.S. war machine with $670 billion for the Pentagon? Does this mean I have to support the military occupation of Iraq and Afghanistan? By supporting the DREAM Act, does this mean I automatically give a green light for U.S. forces to continue invading, killing and raping innocent people all over the world? This is really unfair. Here in Arizona, I struggle with a climate of fear and terror. Yet, even though I am so far away, I hear the cries of Arab mothers who are losing their children in U.S.-sponsored bombings and massacres. There’s a knot in my throat because victims of U.S. aggression abroad look just like us… victims of U.S. aggression at home. This ugly and twisted political system is dividing us and coercing us into supporting the funding of more bloodshed and more destruction if we want the DREAM Act to pass. Does this mean that our dreams will rest upon the nightmares of people who suffer globally? Obviously, students who call their senators are supporting their future, not bloodshed abroad, but we have to be responsible to the larger political implications of this.

3. Democrats are vilifying and criminalizing our parents. A really insulting argument prominently used for passing the DREAM Act that I keep hearing over and over is that because undocumented students “didn’t choose to come to the U.S. to break the laws of this country” you shouldn’t have to pay for the “sins” or “illegal behavior” of your parents. Are they serious?!? It is not OK to allow legislation to pass that will stand on and disrespect the struggle, sacrifice, and dignity of our parents. What about blaming U.S.-led capitalist and imperialist policies as the reasons that create our “refugee” populations. Our parents’ struggle is not for sale. We must not fall for or feed into the rhetoric that criminalizes our parents or us. We all want justice, but is it true justice if we have to sell out our own family members along the way?

Again, I support this fight—it’s part of a larger community struggle. It’s personal to all of us. Passage of the DREAM Act would definitely be a step forward in the struggle for migrant justice. Yet the politicians in Washington have hijacked this struggle from its original essence and turned dreams into ugly political nightmares.

I refuse to be a part of anything that turns us into pawns of dirty Washington politics. I want my people to be “legalized,” but at what cost? We all want it bad. I hear it. I’ve lived it. But I think it’s a matter of how much we’re willing to compromise in order to win victories or crumbs.

This again proves how it is problematic to lobby the state and put all our efforts in legislation to pass. We should know that this political route is always filled with racism, opportunism, betrayals, and nightmares. History repeats itself once again.

So if I support the DREAM Act, does this mean I am OK with our people being used as political pawns? Does this mean that my hands will be smeared with the same bloodshed the U.S. spills all over the world? Does this mean I am OK with blaming my mother and my father for migrating “illegally” to the United States? Am I willing to surrender to all that in exchange for a benefit? Maybe it’s easier for me to say that “I can” because I have papers, right? I’d like to think that it’s because my political principles will not allow me to do so, regardless of my citizenship status or personal benefit at stake.

Strong movements that achieve greater victories are those that stand in solidarity with all oppressed people of the world and never gain access to rights at the expense of other oppressed groups.

I have come to a deeply painful decision: I can no longer in good political conscience support the DREAM Act because the essence of a beautiful dream has been detained by a colonial nightmare seeking to fund and fuel the U.S. empire machine.

I am so sorry and so enraged that this larger political context has deferred those dreams of justice and equality that we all share.

In tears, rage, and love,

Raúl Alcaraz Ochoa was born in Jalisco, Mexico, and grew up in Richmond, California. He has organized around educational justice, youth power, queer justice, and migrant rights issues. After graduating from the Ethnic Studies Department at San Francisco State University in 2006, Raúl moved to Tucson, Arizona, where he works as an organizer of families and youth. This is an edited version of his letter that was published in September 2010 at antifronteras.com.